Press freedom remains an issue in Germany | Germany| News and in-depth reporting from Berlin and beyond | DW | 03.05.2010

Press freedom is under threat in countries like Russia and China. But that does not mean it can be taken for granted in Western Europe. Old scandals and recent issues have hurt Germany's press freedom rating. 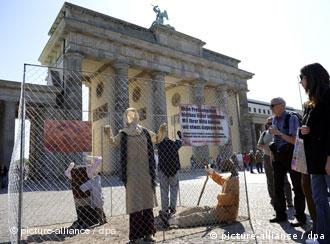 Press freedom remains high on the agenda in Germany

In the latest Press Freedom Index published in October 2009 by the press freedom organization Reporters Without Borders, Germany ranks 18th in the world, behind a host of other Western countries.

The chart, which covers 175 nations, is determined by a points system based on a questionnaire with 40 criteria that cover every kind of violation directly affecting journalists, from physical attacks to censorship and confiscation of material. Currently heading the press freedom list are the Scandinavian countries and Ireland, while Turkmenistan, North Korea and Eritrea bring up the rear, but Germany hovers below many comparably free nations. 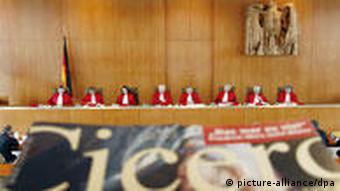 The Constitutional Court ruled in favor of Cicero magazine in 2007

The German constitution, or Basic Law, is very clear about the protection of press freedom. The official translation of Article 5, Paragraph 1 reads: "Every person shall have the right freely to express and disseminate his opinions in speech, writing and pictures, and to inform himself without hindrance from generally accessible sources. Freedom of the press and freedom of reporting by means of broadcasts and films shall be guaranteed. There shall be no censorship."

It is true that journalists in many other countries have much to envy in Germany – the wide range of newspapers, and the strength and variety of the state broadcasting system are considered exemplary even in the west. The United States, Britain and Canada, for instance, are ranked marginally below Germany in the index. But there is also plenty of room for criticism.

Speaking to Deutsche Welle, Eva Werner, the spokesperson for the German Journalists' Association (DJV), summed up the situation.

"You have to look at it relatively. The situation in Germany is nothing like it is in a lot of other countries, where journalists' lives are permanently under threat, but you do have to say that there are still worrying incidents every now and then – for example when the state uses the "accessory to the betrayal of state secrets" clause to gain access information which really belongs to the protection of informants."

The issue of protection of sources in Germany has become an increasing concern for Reporters Without Borders. The German government played its part in the worldwide tightening of security legislation that took place after 9/11, and many German journalists have had reasons to fear that they can no longer guarantee the anonymity of their sources – a vital element in ensuring press freedom.

In the past few years, the state has made increasing use of legislation to investigate cases of so-called "accessory to the betrayal of state secrets" in order to get the names of journalists' informants. This became a public scandal in 2005, when the offices of the political magazine Cicero were raided by police because they suspected that state secrets were being leaked. This affair eventually resulted in a minor triumph for press freedom in 2007, when the Constitutional Court ruled that such a suspicion was not enough to warrant a search. 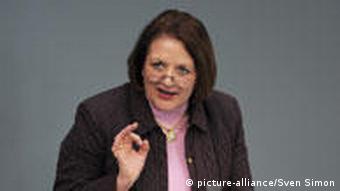 At the beginning of April this year, Justice Minister Sabine Leutheusser-Schnarrenberger proposed a new law that would strengthen the regulations on police investigations of the press.

"We will strengthen press freedom," she announced. "In the future, journalists will be better protected from confiscations. And we will guarantee that no journalist will make himself vulnerable to prosecution as an accessory for publishing material he has acquired."

But Eva Werner remains skeptical. "I don't know if it's really getting better," she said. "There is a proposal, but it has not become a law yet by any means. We hope that this proposal, which we have been demanding for a long time, will become a law, and that things get better after that so that the state does not even try to use the "accessory" regulation."

Journalists' associations also welcomed another constitutional court ruling in March, which declared that the new government's data storage law was unconstitutional. The proposed law would have forced telecommunications companies to keep the telephone, mobile and email connections data of its customers for six months. But even though this particular law failed, Reporters Without Borders fear that a similar law could soon be introduced, since the relevant EU directive is still in force.

As Werner points out, there are other issues troubling journalists. "Another thing that shouldn't be allowed is what happened during the 2006 World Cup and the pope's visit - namely that journalists reporting from the scene were investigated by the police before they were given permission to file reports. In our opinion, that is a massive encroachment on press freedom."

Critical reporting? No thanks - Russian media under state and self-censorship

Unsolved murders of critical journalists, reports of reprisals and attacks and a growing tendency to self-censor: the state of the media in Russia has press freedom advocates worried. (03.05.2010)

At the Re:publica digital media conference in Berlin, online activists from around the world met to discuss challenges to freedom of expression, policies of dot.com giants and how to cope with firewalls. (16.04.2010)

In Russia, the consequences of reporting on corrupt government officials has a chilling effect on journalism (03.05.2010)