"Press Freedom Is the Staple of Democracy"

German President Horst Köhler visited Deutsche Welle in Bonn on Friday. He spoke to DW-RADIO editor-in-chief Miodrag Soric about the challenges Germany and the world are facing today. 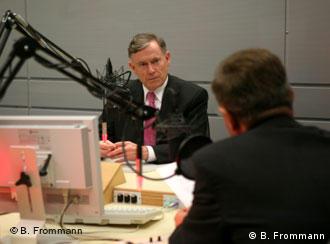 Mr. President, you've spent many years of your life abroad. You also know Germany from an external perspective. How is Germany perceived abroad? Is this picture changing?

My impression is that it's getting better. The period immediately after WWII was marked by the Nazi's crimes and the discussion about guilt. But nowadays people have realized that our development after the war was good, and that we play a very constructive and fair role in international organizations such as the UN. All this shows, I believe, that we can be proud of our country. On the other hand, we should know that other responsibilities lie ahead of us, and that we can't run away from the duties that the international community must perform.

You recently spoke about ethically-based journalism being able to contribute to cultural and religious understanding in the world. What is the role of the media in the so-called dialog of cultures? 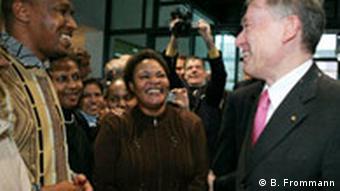 The most important thing is information: fair, open information. People out there are clever and critical. You can't fool them. And when we present our country as it is -- its strengths and weaknesses -- people will quickly realize that we are a reliable partner.

I advocate basic standards in journalism. The free press, so to speak, is the staple of democracy. The free press must be responsible and that also means ethically and morally responsible. In a certain situation, you don't always have to say the first thing that comes to your mind, you also have to be responsible for it.

You have made Africa one of the focal points of your presidency. Why is Africa so important to you?

I have seen need, hunger, death and conflict in Africa. I have also seen -- in my political activities as well as in my private and social life -- that Africa is often talked about, but also that many people believe it is essentially a lost continent. If we allow this kind of thinking to get embedded in people's heads, we would be unfair to the efforts being pursued and the progress being made in Africa. At the same time, we would also hurt ourselves because we would be teaching our young people that there is a discrepancy between our slogans, our ethic and moral vocabulary and our political intentions, on the one hand, and the reality, on the other.

Deutsche Welle wants to expand its presence in Islamic countries. Do you think this is the right thing to do? 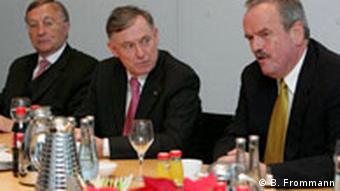 Yes. There are big problems in the Middle Eastern and Arab countries. There is no doubt that peace in the Middle East is possible. But a fundamental prerequisite for this is that we learn more about each other. We know too little about the Arab world, and the Arab world knows too little about us. I think, for example, that good integration of our Muslim citizens is also part of a trust-building concept. If our Muslim citizens become well-integrated, if we take them in with open arms, it will also show the Arab world that we have nothing against Muslims. On that basis, we could then discuss what's important in terms of foreign policy or the fight against terrorism.

Over the past few months, you have voiced your opinion about several politically divisive topics. You are thought of as a very political president. What can we expect from the second half of your term in office?

I don't have a policy of intervention because I am not busy enough or because I am too impatient. I simply think that the president should contribute to the process of finding solutions for the country's fundamental problems. And I think that our fundamental problems are unemployment, education and integration. If we address politically these three areas in a decisive, urgent, steady and straightforward manner, our country will have good prospects. And I will always take part in the discussion of these topics.

East Germany's notorious secret police, the Stasi, became infamous for its surveillance operations of prominent politicians during the Cold War. German President Horst Köhler is the latest to be revealed as a target. (27.11.2006)

German President Horst Köhler has called on European nations to take more action to help stabilize Iraq. But what sort of options can Europe offer to constructively support the country's future? (15.11.2006)

Horst Köhler is convinced that Africa's ideas will solve Africa's problem. That conviction marked the choice of countries he visited during his second trip to the continent as Germany's president. (12.04.2006)