Election authorities in Montenegro have named incumbent Filip Vujanovic as the winner of Sunday's presidential election, with 51.21 percent of the vote. The opposition have cried foul, calling for an EU investigation. 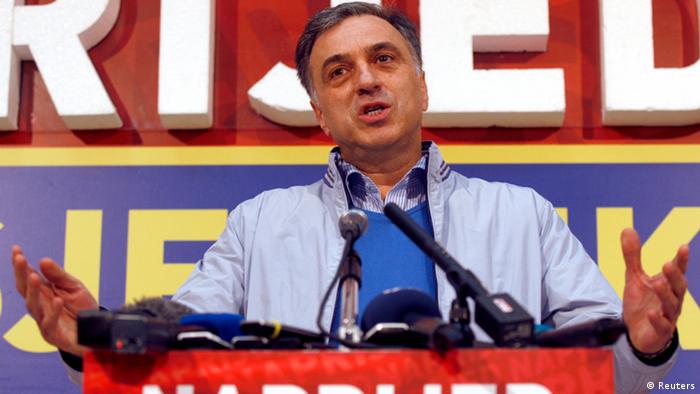 The election commission in Montenegro named incumbent Filip Vujanovic as the narrow winner late on Monday, after both candidates claimed victory in the presidential poll. However, the commission cautioned that these were preliminary results, still subject to change.

Both sides had complained about the length of time it took to publish the results in a small country with around half a million eligible voters, only 60 percent of whom cast their ballots.

Vujanovic, running for a third term in office, secured 51.2 percent of the vote, according to the official results. Vujanovic, president since 2003, represents the same Democratic Party of Socialists (DPS) that control the country's legislature. Although Montenegro's constitution states that a president can serve only two terms, the Constitutional Court ruled prior to the vote that Vujanovic's first term did not count because it began before Montenegro's 2006 independence from Serbia.

PDS official Caslav Vesovic said the election commission's result "removes all doubt over who the citizens chose as president of Montenegro, and they chose Filip Vujanovic."

Opposition candidate Miodrag Lekic, put at 48.8 percent of the vote, represents the opposition Democratic Front. His party said before the final results were announced that it would not accept a Vujanovic victory, claiming election fraud. The opposition filed one complaint before the ballot, saying voter registries for at least 7,000 entries had been manipulated; police did not investigate. The winning margin was roughly 7,000 votes.

"It's clear that this is election fraud," Goran Danilovic, a senior Democratic Front official, told Reuters, offering similar statements to other outlets. "I guarantee we will not allow our victory to be taken from us, whatever it takes."

Lekic had said in the early hours of Monday morning that he would ask the EU to investigate, should his rival be named the victor.

International election monitors from the Organization for Security and Cooperation in Europe refused to comment on the opposition claims on Monday, instead saying that "from a technical standpoint the election was administered in an efficient manner and fundamental rights were mostly respected."