President of Iran Gives Alternative Christmas Message in UK | Europe | News and current affairs from around the continent | DW | 26.12.2008

British broadcaster Channel 4 has been broadcasting an alternative Christmas message since 1993. Deutsche Welle correspondent Clare Cavanaugh was in London and gives her input on this year's controversial speaker. 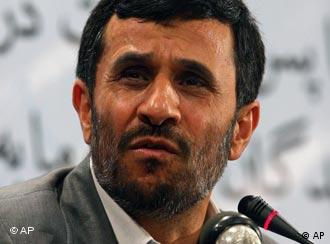 DW-WORLD: What was your impression of the speech?

Clare Cavanaugh: If you'd had your eyes shut, you would imagine that you were listening to the Archbishop of Canterbury, the head of the Anglican Church, not the president of Iran, Mahmoud Ahmadinejad. He was talking about Christianity, he was talking about congratulating the people of Britain on the anniversary of the birth of Jesus Christ. This is not something you expected from the supposedly firebrand president of Iran.

Was it a disappointment? When I saw a couple of excerpts yesterday, I have to admit that I thought it was rather boring.

I think it was slightly dull. It certainly wasn't what people were expecting. Certainly the British government and a number of MPs and a number of Jewish groups had, before the broadcast was even made, expressed their disappointment and even anger that Channel 4, the broadcaster, had approached Mahmoud Ahmadinejad to ask him to record this message. They said that he held anti-Semitic views, anti-homosexual views, and that he was a dangerous person essentially and shouldn't be given this platform to speak. So it wasn't what we were expecting at all.

Why did Channel 4 do this? Were they trying to do something scandalous so that they would make the newspapers the next day?

I suspect that Channel 4 had a very different opinion of what Mahmoud Ahmadinejad would have said. I would imagine they were thinking that he would be spouting some anti-Western rhetoric; the sort of thing we have to come to know him for, or at least we think we know him for. In fact, Channel 4 has been doing an alternative Christmas message since 1993. The first one was delivered by a gay icon called Quentin Crisp, who is now no longer with us. Then, it was called the “Alternative Queen's Message,” delivered by a gay man. It went up against the broadcast on Christmas Day of Her Majesty the Queen, which is broadcast at 3:00 p.m. on BBC One. They wanted to be controversial; certainly they wanted to be controversial with their first broadcast, and I suspect that's what they thought they would get from Ahmadinejad.

We've had some unusual figures speaking on this alternative Christmas message. We've had Brigitte Bardot, the French actress. We've had Sharon Osbourne, who is married to Ozzy Osbourne, the ex-rock star, and former X Factor judge in the UK. And we've had Jamie Oliver, who is a celebrity chef in the UK. Last year's message was given by Major Andrew Stockton, a British soldier who lost his arm fighting in Afghanistan.

Channel 4 is a commercial broadcaster and they're competing with BBC One assume?

Channel 4 is a commercial broadcaster, but they do get a public subsidy. So they may be in hot water over this because potentially they could lose that subsidy if it's found that this broadcast caused enough controversy. Certainly it had up until the time it was broadcast, and then we discovered it was a rather dry message that he was delivering.

I'm sure Channel 4 is now sitting back and thinking to themselves that wasn't such a great idea. Has it had this kind of experience in the past?

Not at all. It's always been a bit of a scandal, or something funny, amusing, alternative. They've never gone for a figure like this; somebody they would expect would provoke or cause outrage. Certainly they got that sort of reaction before the broadcast. What we have to wait and see is if that will be the reaction after the broadcast.

Is there any word yet on how many people viewed it?

No. Channel 4 is one of the main terrestrial broadcasters in the UK out of five, but it doesn't normally pick up the kind of the ratings of, for example, a soap opera on the BBC, which might pick up 20 million viewers. Channel 4 is more around the four million mark, and that is at its peak.

How is the British press reacting to this?

I think in some ways it's created quite a lot of interest. I mean if you want publicity, Channel 4 has done the right thing. They've had lots of publicity, even before the message was broadcast. This was a big story on the BBC and most national newspapers covered it. And of course with the paucity of news on Christmas Day, they got a lot of coverage. So I expect there will be two or three days of a storm in a teacup, but I think it will probably be over by New Year.

Clare Cavanaugh is a DW correspondent in London

Questions concerning Iran's past nuclear activities and Syria's alleged secret nuclear program are expected to dominate a week-long meeting of the International Atomic Energy Agency board that opened in Vienna on Monday. (22.09.2008)

Iran Preaches Friendship With US, Israel After Inconclusive Talks

The deputy to Iranian President Mahmoud Ahmadinejad said that Iran was now a friend of the US and Israel, Iranian news agencies reported Sunday, July 20 -- a day after nuclear negotiations with the West came to nothing. (20.07.2008)

Negotiations and sanctions are two European options vis-a-vis Iran and its alleged nuclear program. Brussels says it is going to pursue both. But Tehran isn't very happy with Europe these days either. (25.06.2008)