Preserving the addax, a desert survivalist

The addax could be mistaken for a ghostly mirage in the Sahara Desert. But this antelope is perfectly adapted to survive harsh conditions there. Now, it's on the verge of extinction thanks to poaching and habitat loss. 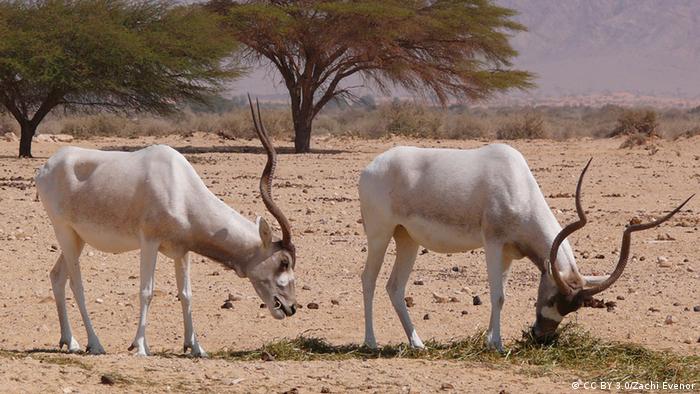 Scorching temperatures, virtually no rainfall, massive sandstorms and little vegetation: Life in the Sahara Desert is harsh. Yet one animal is perfectly adapted to these seemingly impossible conditions: the addax, a ghostly antelope with long, twisted horns.

The addax rarely needs to drink, as it gets most of its water from the plants it eats. Its broad, flat hooves prevents it from sinking into the sand, and its coat changes from brown in winter to white in summer to reflect heat to keep it cool.

Herds of addax once roamed North Africa in abundance, but habitat destruction and uncontrolled hunting for meat, horns, leather - and more recently, sport - have brought them to the brink of extinction in the wild. A recent survey in Niger found that one small but viable population of 200 in 2010 had fallen to just three.

"We are witnessing in real time the extinction of this iconic and once plentiful species," Jean-Christophe Vié, Deputy Director of International Union for Conservation of Nature (IUCN), said in May when the survey was published. 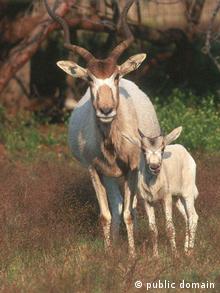 A rare sight - in the wild, there are virtually no more of this beautiful antelope left

In Niger, the critically endangered antelope's problems started in 2008 when the country awarded oil exploration rights to the China National Petroleum Corporation in the animals' last stronghold in the southeast of the country.

Lorries and bulldozers have since dispersed addax herds. And military personnel assigned to protect oil operations have been poaching the animals there, in spite of a ban.

In 2011, addax populations took another blow when the civil war and collapse of Muammar Gaddafi's regime in Libya "saw an exodus of militia with arms and 4x4 vehicles to neighboring countries, into areas harboring important wildlife populations," says the IUCN.

"Without immediate intervention, the addax will lose its battle for survival in the face of illegal, uncontrolled poaching and the loss of its habitat," says Vie.
Working together

Groups like IUCN and the Sahara Conservation Fund (SCF) are working with Niger's government to try and save the addax.

In 2012, Niger opened the Termit & Tin Toumma National Nature Reserve to protect the addax and other wildlife. Described as a veritable Noah's Ark in the desert, it is Africa's largest reserve, covering an area roughly the size of Hungary. But that's a big area to patrol, and poachers are slipping through the net.

Conservationists have designed an action plan to revive wild addax populations by helping to build the capacity of Niger's wildlife service, and are working with local populations to help manage protected areas.

Groups such as Sahara Conservation Fund (SCF) want to bring Chinese business interests and Niger authorities into the fold to help control poaching and minimize the impact of oil drilling in addax habitat.

"Those with commercial interests in the desert could make important contributions to the protection of the addax by cooperating with the wildlife authorities and by adopting more sensitive practices," said Thomas Rabeil of SCF in a recent statement.

If efforts are unsuccessful, the elusive addax could meet the same fate as its fellow desert antelope, the scimitar-horned oryx, which died out in the wild in the 1990s due to hunting and habitat loss. The clock is ticking.