A new round appears to have opened in the fight between religious and secular interests in Turkey. Turkish citizens took to the streets after an Islamic pundit described appearing heavily pregnant in public as immoral. 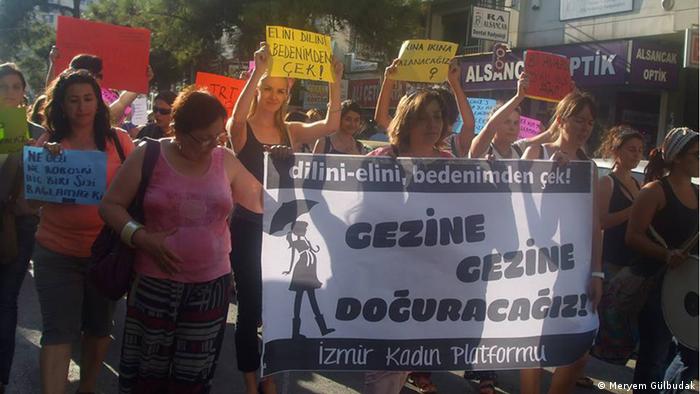 "It's my body. It's my decision." Under this motto, hundreds of women - many of them very pregnant - took to the streets in Istanbul, Izmir and other Turkish cities. Non-pregnant people joined as well, with some men stuffing balloons under their shirts in a show of solidarity.

On Twitter, the protest was organized under the hashtag #direnhamile (pregnant resistance). On Facebook as well, heavily pregnant women shared photos of themselves with their large bellies.

Sparking the protests was an interview aired by state broadcaster TRT with Ömer Tugrul Inancer. The Turkish lawyer and Islamic pundit said that women who are seven or more months pregnant should not be out in public. Calling the highly pregnant "not aesthetic," Inancer added that if such women wanted to get some fresh air, they should be driven around by their husbands or go only out at night.

Turkey's Religious Affairs Directorate released a statement in response, saying that Islam did not call for isolation of pregnant women. "On the contrary, being a mother is a gift," said the statement by the country's highest Islamic authority. The directorate did add that pregnant women should dress modestly, and not reveal their bellies or backs.

Turkish women like Beyhan Güngör couldn't contain their fury over the interview that was sent out over state airwaves. The 57-year-old mother and wife doesn't think the state should be telling her what to do with her body. Güngör described Prime Minister Recep Tayyip Erdogan's AKP government in particular as being oppressive of women over the past decade.

"They try to organize every detail of our lives. It's said that women should just stay at home and have children - at least three, as Prime Minister Erdogan has put forth," Güngör told DW.

The active demonstrator and self-described feminist said that of all the governments she has lived under, Erdogan's is the worst for women. "He's trying to shape society based on his Islamic roots," Güngör said. And that is "restricting the rights of women," she added. 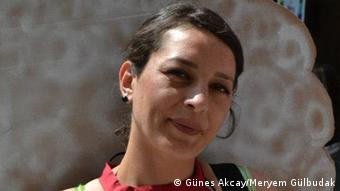 Akcay described women's rights in Turkey as still being elusive

Pro-women protests also took place in front of the TRT building in Izmir - the third-largest city in Turkey is perceived as being particularly modern and progressive. Günes Akcay, deputy spokesperson for the Greens and the Left Party of the Future in Izmir, described the illusory nature of women's rights in Turkey.

"It seems like I am free. I can wear my shorts or short skirts, but there's pressure from every side to get married," said the 32-year-old. She described how when women near 30, pressure grows on them to get married and have children.

"Your mother says it, your neighbor and work colleagues. Even your boss makes such comments about your private life," Akcay told DW. The identity of women in Turkey is very much tied to being a wife and mother - and not an individual, she added.

Erdogan has made specific comments about how women should be, Akcay pointed out. "He speaks against abortion and against Caesarean birth," Akcay said. Women in Turkey who have C-sections generally have fewer children. "We're constantly taking to the streets in response to these kinds of government policies," she explained.

Not just one 'Turkish woman'

Women's rights activist Karin Ronge doesn't see the situation for women in Turkey quite so dramatically. She believes there's not one single unified woman's role there. "Turkey is such a diverse country. There is no one Turkish woman," Ronge said, pointing to many highly educated women in the banking sector, or who work at schools and universities.

For the past 18 years, Ronge has been active with the non-governmental organization Women for Women's Human Rights in Istanbul. She sees the Erdogan administration as also having made positive steps for Muslim-conservative women in Turkey.

"One cannot say that the AKP government has made everything worse," Ronge told DW. She pointed out that under Erdogan, women fought for and partially regained the right to wear a headscarf to university. Allowing this to remain forbidden would be a violation of the right to education, Ronge thinks. 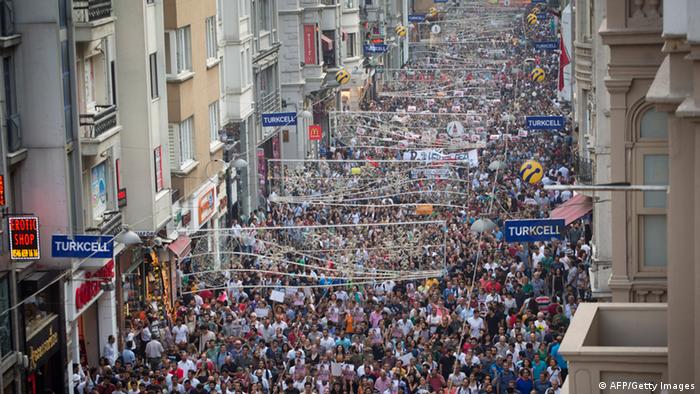 Other recent protests, like this mass demonstration in Istanbul, accused Erdogan of an authoritarian and conservative religious ruling style

Ronge did criticize the government's statements against abortion, which has been legal in Turkey since 1983. Even if the Turkish government hasn't been able to ban abortion, moral pressure against it has increased, she said. She described how in recent times, some doctors have cited religious convictions in refusing to perform abortions there - where in the past that had been unheard of.

But Ronge also pointed out how Islam presents different perspectives on this issue. "In Islam, there are very diverse directions of interpretation," she said. "Some of the scholars are saying the soul enters the body only after 40 days," Ronge said by way of example.

The 52-year-old said that women in European countries have better access to supportive institutions. Women in Turkey who turn to the police after being subjected to domestic abuse are often sent back to the perpetrators, Ronge said. "The state mechanisms are not working" in this regard, she added.

Ronge concluded by saying that Turkey has underdeveloped supportive institutions for women, and that this is a big area for improvement.

Femen: Fighting the 'feminist Spring' in the Arab world

Members of the breast-baring feminist movement Femen say they are fighting the patriarchy. One of their latest ideas is to launch a "feminist spring" in the Arab-Muslim world, but it's been causing outrage and arrest. (22.07.2013)

Nils Muiznieks, human rights commissioner for the Council of Europe, told DW about his discussions with Turkish officials over Gezi Park problems, and what he thinks needs to be done to improve rights to assembly. (17.07.2013)

Turkish journalists join up against censorship and violence