Femen: Fighting the ′feminist Spring′ in the Arab world | Europe | News and current affairs from around the continent | DW | 22.07.2013

Femen: Fighting the 'feminist Spring' in the Arab world

Members of the breast-baring feminist movement Femen say they are fighting the patriarchy. One of their latest ideas is to launch a "feminist spring" in the Arab-Muslim world, but it's been causing outrage and arrest. 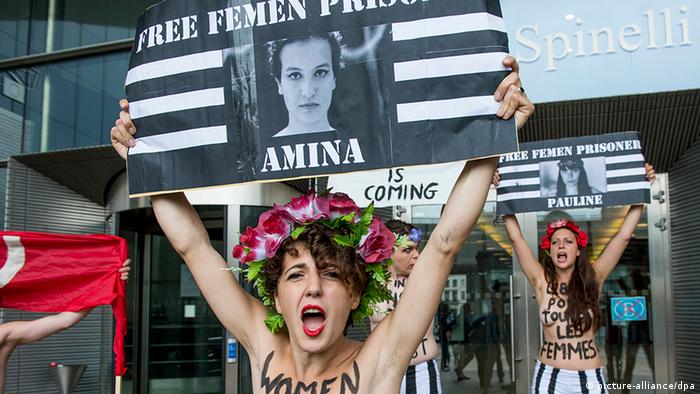 Pauline Hillier looks tired as she greets a visitor to Femen's Paris headquarters. That's understandable. She's just been released from police custody after trying, unsuccessfully, to demonstrate in front of the Elysee presidential palace. The 26-year-old wears a flimsy white coverall over Femen's trademark battle fatigues - underwear…and not much else.

"It was really surprising because we got out of the car to start our protest and as soon as they saw our flower crowns, the policeman started to run at us, to arrest us. It was really quick. So, as they caught us, we didn't want to stop our protest, of course, we had a message to deliver. So we just kept fighting and continued our protest as we always do."

Hillier's latest brush with the law was pretty mild; at least compared to the previous one. She recently spent one month in a Tunisian jail, for staging a topless protest in support of imprisoned Femen colleague, Amina Sboui. 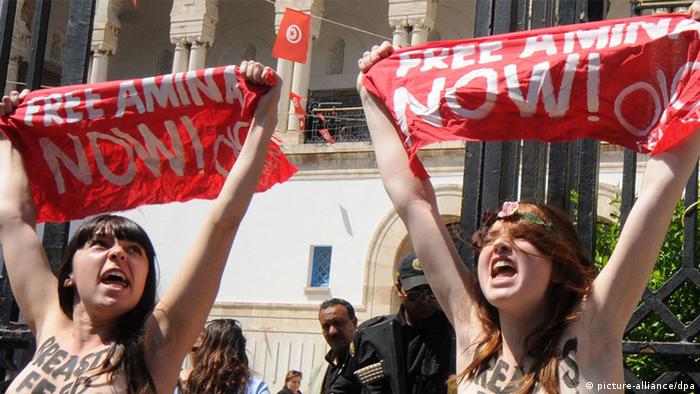 Internet videos show Hillier and two other European Femen members, one French and one German, demonstrating before a crowd of photographers and angry people in front of the Tunis courthouse. One man tries to throw a coat over the women, who have graffiti painted on their chests. Seconds later, plainclothes police haul them away.

"They threw hot coffee on us. We thought it was acid. We were really scared, but we continued. Then they tried to hide us, because of course, they cannot stand boobs [in public], it's [just] not possible. They insulted us, they pointed guns at us, then they put us in a dark room and they insulted us again…I remember one women [wearing] a niqab - she punched me in the face."

Femen's bare-breasted battles for women's rights are quickly making the feminist movement a household name. Femen women have stripped down to their underwear to protest sex tourism, religious institutions, autocracy and, of course, chauvinism. The response has been outrage, amusement and, sometimes, support.

Last year, Femen opened a European training camp in Paris, to prepare a new generation of young feminists for battle. The HQ was the site of a fire on Sunday (21.07.13) although the cause is yet to be determined, and is being treated as an "accident" by police. 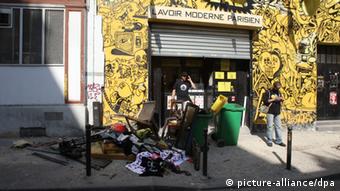 The Femen group reportedly said it was a strange coincidence since earlier in the week, they had received a phone message saying they should "burn" like "witches".

Hillier herself is said to have been present in the building, although not hurt, as some members of the group sleep on the upper floors. Punching the air as she speaks, Hillier demonstrates what goes on at their training sessions.

"Usually, we are like 20 [training]. We run, we do physical preparation, like pushups [to make sure we are in shape]. But also we prepare scenarios like how to strip quickly, how to attack a politician, for example, or how to jump on a car or how to climb stairs, stuff like that."

Femen's latest target is Islam. Inna Shevchenko, the Ukrainian head of Femen's Paris branch, who has just gained asylum in France, says Tunisia is only the start of a larger campaign for women's rights in Muslim countries. She calls it a new "Arab spring" for women.

"Countries of [the] Arab Spring were a big disappointment for society, but also with the changing political situation - and Islamist parties which are leading governments, in Tunisia as well - they are trying to increase the levels of oppression." 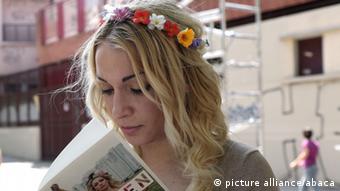 Tunisia was the launchpad for the wider 2011 Arab uprisings. It has long been hailed as a regional leader when it comes to women's rights. But today, rights activists like Khadija Cherif fear the rising clout of Islamists is rolling back women's gains - and free expression in general.

"What is happening today is serious. Because this young woman who bared her breasts…just because she painted graffiti on a wall, she finds herself in prison."

"Even if, for me, [what she did] is not the best way to defend women's rights, it doesn't put anybody in danger. "

For Femen, Sboui was a sister in trouble. The women had to defend her, Hillier says, even if it meant following her to prison, so they headed to Tunisia, and ended up in custody.

"We shared a room with many girls. It was hot inside, with those bugs, cockroaches. Food is only once a day. We only had one shower in a month. There is not one bed per person - we were humiliated."

Not surprisingly, Femen's anti-Islam campaign has sparked widespread outrage, including among women. A new Facebook group, "Muslim Women Against Femen," accuses the movement of being anti-Islamic.

The women of Femen: fighting Islam with bare breasts

Listen to Lisa Bryant's radio report from Inside Europe

Tunisia's Deputy National Assembly speaker Mehrezia Labidi, of the moderate Islamist Ennahda party, does not support jailing Femen activists. But she does not think they are helping the feminist cause either.

"I don't think such a provocative act as that by Femen can advance in any way ideas about women's status or freedom. I'm afraid it can only provoke conflicts and clashes."

Femen's tactics are also questioned in the ethnically diverse working class Paris neighborhood where it is based. At a nearby cafe, Algerian Said Kana is ambivalent about the movement.

"I support free expression, but there are limits. You can't undress in certain places."

Nearby, a Muslim hardware store clerk who calls himself Momo says Femen has "no decency." But, ignoring those criticisms, Hillier argues Femen is winning new supporters, both in Paris and abroad. She says many young Tunisians now support Femen on Facebook. So do the female inmates she spent time with in the Tunisian prison.

"We had time to discuss with them, even though they were really religious women, but they were starting to criticize [the] government and to complain [about] why women are in jail and the repression in Tunisia. So they are daring to be pissed [off] and to say it out loud, not to keep it for themselves."

Hillier and her European colleagues were released at the end of June. But Tunisian activist Sboui remains in jail, as she awaits trial on charges of desecration and indecency. So Femen's battle continues - in Tunisia and elsewhere.

"Something is rising. I think there is a new energy with Femen. Many girls want to join, many branches are opening …not only in North Africa or Muslim countries, also [in] Spain, Canada, Poland, many many countries."

Undeterred, Hillier says it's just the beginning of Femen. The movement will continue, she and other Femen members say, until patriarchy is dead.