Two decades have passed since Czechoslovakia's Velvet Revolution. The Communist regime has disappeared, but many of the posters instrumental in the campaign for change have been brought back to life in a book. 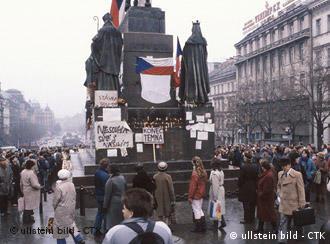 The writing on the wall at Prague's Wenceslas Square in 1989

Prague's Wenceslas Square has been a focal point of protest at various times in Czech history, and the weeks of the 1989 Velvet Revolution were no exception. Posters calling for "Free Elections" and "Havel to the Castle" were plastered to every surface. Many of them were the work of leading designers.

"It was just a wave of creation, of people's art. It was amazing, a flood, from very simple things to very sophisticated poetry," Jan Bubenik, then student leader of the revolution, told Deutsche Welle. 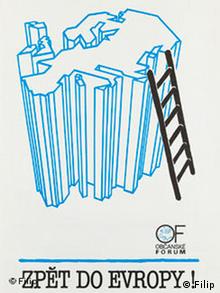 Now graphic designer Filip Blazek has captured some of that wave of creation in a new book entitled "Posters of the Velvet Revolution." And as he told Deutsche Welle, there was plenty to choose from.

"Prague was absolutely 'over-postered' at that time. You could see posters outside buildings, inside buildings, on windows, on public transport," he said.

Many of the very first posters were created by students such as Bubenik. They may have been hand-written and a bit crude, but they were the product of creative and dedicated young minds.

"After we took over the medical school and had an occupational strike, we had a full department which was only focused on making posters," said Bubenik.

It wasn't long before professionally printed posters began to appear alongside the home-made ones. Produced in runs of up to two million, these are the works which feature in Filip Blazek's new book - and he had a hand in making many of them himself.

Although he was only 15 years old in 1989, he would travel after school to a gallery in Prague which was a hotbed of revolutionary activity. 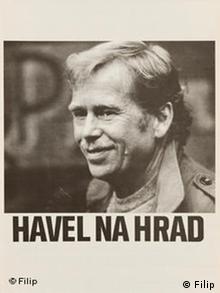 "Havel to the castle"

"The Manes exhibition hall was headquarters of the artists or designers organisation," Blazek said, adding that it was logical for them to team up with the organizers of the protest movement.

Among those who chose a theme to illustrate were Frantisek Skala, today a leading Czech visual artist, and Ales Najbrt, who heads one of the country's most highly regarded design studios. The posters they and others produced often featured little more than slogans such as "End one-party rule!" and "Back to Europe."

Many were in red, white and blue, the Czech colors, and a good number bore the logo of Civic Forum, the loose opposition group that led the country to free elections. Blazek said the quality varied, but - given the times - artistic merit was not the main issue.

"I think what is most important for me is that the designers did a great job," he said. "They expressed ideas of freedom, ideas of humanity, ideas of free elections - and this is not what their schools had prepared them for."

One particularly common poster featured a photo of then playwright Vaclav Havel with the slogan "Havel for President." By the end of 1989, that call had become reality and Blazek believes the posters contributed to that success - not least because Havel was relatively unknown outside Prague and other major cities. 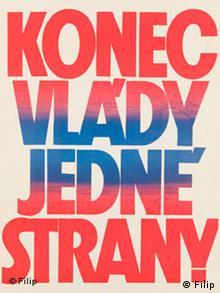 "Because he looked good on the poster," Blazek said, "people started to like or even adore him. It was a very important part of his election campaign."

Once Havel took up the presidential reins on December 29, 1989, the Velvet Revolution was effectively over and the posters started to disappear from walls and buildings. But many of the most significant ones have now been persevered for posterity.

The Czech Republic has marked the 20th anniversary of the Velvet Revolution - which led to the collapse of the communist regime - with a re-enactment of the student protests that made it happen. (17.11.2009)

The "Gentle Revolution" and the birth of an independent Slovakia

In Slovakia the events of 1989 are remembered as the "Gentle Revolution" marked by non-violent demonstrations. But the changes also led to the break up of Czechoslovakia - into the Czech Republic and Slovakia. (21.11.2009)

Postcard from the Czech Republic: Prague - past and present

The Czech capital, Prague, is one of Europe's most beautiful cities. But under communism, Prague was shrouded in the grime of centuries and an atmosphere of oppression, as correspondent Alexa Dvorson recalls. (13.11.2009)