Czechs re-enact 1989 student march that led to Velvet Revolution | Europe | News and current affairs from around the continent | DW | 17.11.2009

The Czech Republic has marked the 20th anniversary of the Velvet Revolution - which led to the collapse of the communist regime - with a re-enactment of the student protests that made it happen. 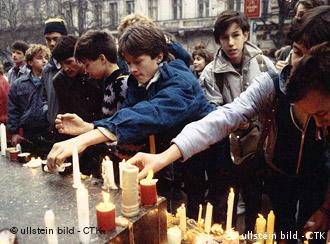 The people of the Czech Republic have been marking the 20th anniversary of the start of the Velvet Revolution, when the communist regime fell - in what was then Czechoslovakia - after more than four decades of repression.

On November 17, 1989, an officially sanctioned student march in honor of a young Czech killed by the Nazis in 1939, turned into a vocal but peaceful demonstration against the communist government.

When the protestors reached the center of Prague, they were surrounded by riot police and brutally attacked. The event set in motion a peaceful process that culminated in the election of a former dissident, Vaclav Havel, as Czechoslovakia's first post-communist president by the end of the year.

Exactly two decades later - on what is now an official Czech state holiday - an estimated 5,000 people gathered in the capital city of Prague to take part in a re-creation of the original march. A free rock concert was given on Narodni Street, the spot where the communist security forces had brutalized students a few hundred meters from the bottom of Wenceslas Square.

Event organizer David Gaydecka of the non-profit group Opona ("curtain") says he and his thirty-something friends had been planning Tuesday's re-enactment of the original 1989 march for quite some time.

"We grew up in the totalitarian system, but since becoming adults we have been living in a free society. It's very important to say - to make a statement - that we have something to celebrate and we know why," he said.

Gaydecka's colleague, Marek Vocel, says as well as celebrating, Czechs ought to use the anniversary to reflect on how their society has developed since the fall of communism. 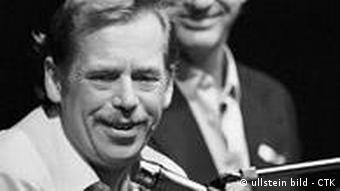 "Not just Czechs, but all people around the world forget their past very quickly, so what we also want to say is, don't forget," said Vocel.

What was striking on Tuesday was how many of the participants were simply too young to have any more than a vague memory of the communist era. Jan Moudrik, who was not yet born 20 years ago, says he turned out to offer thanks to that era's students for helping bring democracy to the Czech people.

"At the beginning it was just the students, but when the police attacked them, then it was the last straw for their parents who also started to get involved," said Moudrik, a first-year university student.

"I was four, so I couldn't go to the demonstration and can do it now…I think it's the minimum I can do for democracy," said another student, Petr Mydlil.

There has been a marked contrast between how the anniversary of the fall of the Berlin Wall was celebrated in Germany last week and how Czechs have been marking the start of their own change of regime. Most events have been organized by civic groups like Opona rather than the Czech state.

Indeed, some questions have been asked about why the government has not put on more official events.

Among the biggest events that have been held were a conference and concert organized by Vaclav Havel on Saturday. The latter featured some of the 73-year-old former dissident's favorite musicians, including Joan Baez, Suzanne Vega and Lou Reed.

Though commemorative events in Prague and elsewhere in the Czech Republic may be relatively low-key, there is no doubting the significance of the Velvet Revolution to Czechs. A recent opinion poll suggested two-thirds believe it was the most important moment in their nation's modern history.

Postcard from the Czech Republic: Prague - past and present

The Czech capital, Prague, is one of Europe's most beautiful cities. But under communism, Prague was shrouded in the grime of centuries and an atmosphere of oppression, as correspondent Alexa Dvorson recalls. (13.11.2009)

Czechoslovakia watched very closely as the events of the 9th November 1989 unfolded in Berlin. In Prague eight days later, a police crackdown on a student demonstration sparked the Velvet Revolution. (09.11.2009)

Around 70,000 people gathered in central Prague to protest against the Czech government's foreign and economic policies. Prime Minister Petr Fiala said the protesters did not have the country's best interests at heart.