In the last of a series of interviews ahead of Euro 2008, VfB Stuttgart defender Fernando Meira, 29, who played for Portugal in the World Cup 2006, spoke about his countryman Cristiano Ronaldo and a new Portugal team. 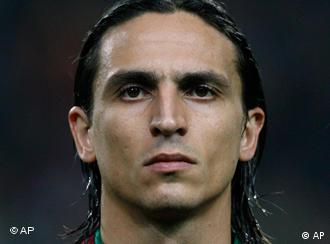 DW-WORLD.DE: Your country was the last host of the European Championships, and now Portugal is going to be a guest in Switzerland. What kind of an atmosphere do you hope for?

Fernando Meira: I hope that the spectators in Switzerland can inspire the team. I hope too that the mood can be even better than the last European Championships or the World Cup, although the soccer stadiums are smaller.

You had to wait a long time to take part in the European Championships. How do you feel today, when you look back at 2004, at a time that you didn't make the cut for the Portugal team?

That was a huge disappointment for me, but now I'm going to be there. I had to simply accept the rejection back in 2004 and continue training hard. Then the chance to join the national team came up again, and I plan on doing everything I can to make it a success.

In the last few years Portugal has become one of the strongest teams in the world, so why haven't you captured a title?

The reason is that other teams have also been extraordinary. It's not easy to win a big international tournament such as the Euro. Still, it is our goal and we will persevere with it. 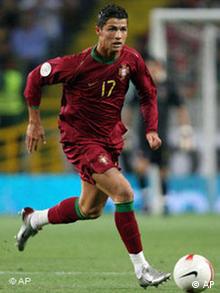 Cristiano Ronaldo: "He is a world class player, a star"

It is certainly a possibility. It's going to be tough, but we will give it everything. The group we're in for the knockout is not easy. (The group also includes Switzerland, the Czech Republic and Turkey)

Group A is a tough one, but I don't see any other easy groups in the lot. Still, we've got a good chance, and we will do everything possible to advance to the next phase.

Do you think Portugal is going to reach the final as it did in 2004?

Only on June 15 when we play our third match. I hope that we can show our tremendous potential. We face really tough competition in our group, but we are determined to pull through.

On June 15, you will be playing against Switzerland, which is regarded as the weakest opponent in the group.

No, none of them is easy. The Swiss are playing on their home turf and have the support of their fans, which also extremely important. In the last World Cup, they demonstrated that they were a solid team, especially the defenders. It is tough to score against the Swiss, even though Germany won 4-0 in a friendly against them. They've got players like Alexander Frei and Tranquillo Barnetta, who can determine the outcome of a match. One has to watch out for players like that.

What do you think of Turkey?

They've got Yildiray Basturk (a midfielder who also plays for VfB Stuttgart in the Bundesliga), who is in top form and played plenty of good matches for us. It's extremely tough to stop him. I'm going to warn my national coach (Luiz Felipe Scolari) about him.

There are of course other Turkey players, such as the Altintop brothers, who are strong players. The Turks have plenty of experienced players, and we must watch out that they don't get a single goal past us, because then it's going to be tough to counterattack. 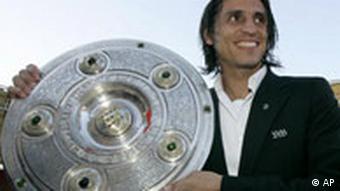 Meira with the Bundesliga trophy in Stuttgart

Would you say the Czechs are the group favorite?

The Czechs are a team with more experience than the others. They've got many older players, who've already taken part in EM and World Cup tournaments. The game revolves around the main striker Jan Koller.

But they have now lost Tomas Rosicky, which is important for opponents to know. But still they have so many other fine players. The Czechs are of course a tough opponent.

Portugal possesses one of the biggest soccer stars in the world on its team: Cristiano Ronaldo. What does it mean for the team to have such a dominant star player?

It is an honor and a motivating factor for us to have such a top player and friend on our side. I have already said, that we are going to help make his game our team focus. He is a world class player, a star, who can determine the outcome of every game. But of course we all know very well that he can't play the game on his own, and we need to support him in his strategy. Ronaldo of course is our team's greatest strength.

That doesn't mean that Portugal is dependent on Ronaldo, does it?

No, but he is a huge advantage for us.

The era of Figo (former team captain Luis Figo is regarded as one of Portugal's greatest players) and his team is now over. Is the Portugal team now starting at square one?

No, the generational change is a natural development of our team. We have plenty of fresh blood and new strategies. We have certainly learned a great deal from players like Figo, Rui Costa or Maniche. The new players have their own personalities, strengths, and their own mind-set. We will have continued success with them.

The team's collaboration with coach Felipe Scolari has been well worth the effort, hasn't it? Portugal has made it to the final rounds of a major international tournament, for a second time now after the World Cup. 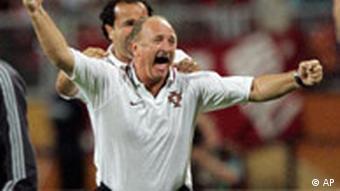 Yes, we've done very well in the last few years. It is of course an honor to work with someone like Scolari. I hope he can remain with us for the next few years. Portugal is stronger with Scolari than without him.

You and Hugo Almeida are two national players who play in Germany's Bundesliga. What kind of experience do you bring from the Bundesliga to the Portugal team?

Switzerland has plenty of players in the Bundesliga, so it is of course an advantage for us to know the opponent's tricks.

Soccer in Germany is quite different from Portugal or Spain. Here in Germany, we have learned another way, another method of play. In the Bundesliga for example, there is a tendency to shoot long balls from the defense into the opponent's half, so when you are faced with an opponent who deploys a similar tactic, you know how to react. It is always an advantage to be familiar with different systems of play.

Do you exchange such know-how with the rest of the team?

Almeida and I know a number of things about the Swiss players in the Bundesliga, for example. That obviously confers an advantage for us.

In VfB Stuttgart, we've got two colleagues Ludovic Magnin (Switzerland) and Yildirai Basturk (Turkey), who will become our opponents in the tournament.

On one hand I hope that both of them do well in the championship, since they are my friends. Unfortunately we are going to be opponents in and only one of our teams can advance. I certainly hope they don't win against Portugal!

In the latest of a series of interviews ahead of Euro 2008, Russia and FC Nuremberg striker Ivan Saenko talks about the key role Coach Guus Hiddink has played in Russian soccer and his own expectations for Euro 2008. (26.05.2008)

In the first of a series of interviews ahead of Euro 2008, young Swiss midfielder Tranquillo Barnetta talks about Switzerland's passion for soccer and the hosts' prospects for the tournament. (21.05.2008)

Austria's Martin Harnik: "Austria Wants to Be a Successful Host"

In the latest of a series of interviews ahead of Euro 2008, Austria and Werder Bremen striker Martin Harnik talks about playing Germany in Group B and whether his Bundesliga experience will be an advantage. (23.05.2008)