Portugal: world champion of everything cork | Business | Economy and finance news from a German perspective | DW | 30.05.2017

Portugal: world champion of everything cork

Cork is Portugal’s great success story. It is exported to 133 countries and used for bottle stoppers, building material and by the fashion industry. But this path to success started with a German sandal maker. 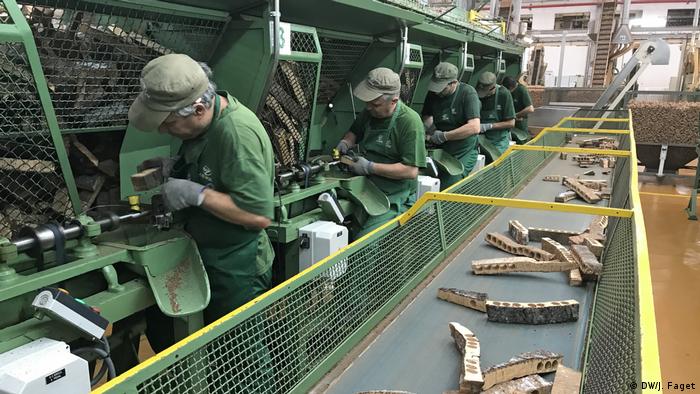 Five men in green outfits work next to each other at green machines. After a quick glance at the cork strips in front of them, they punch out a bottle stopper. Each press of their pedal is a new cork. Ten, twelve in a row. But sometimes just one - depending on the quality of the raw material.

Since cork is a natural product the quality is not always the same. In order to create perfect corks nonetheless, the men must constantly check the bark. To meet increasing demand, an experienced cork cutter can make 12,000 to 15,000 corks a day at the Amorim cork factory in the northern Portuguese city of Mozelo. The factory is the biggest in the country.

Portugal is the world champion of everything cork. It has the most agricultural land devoted to cork in the world. It is also the biggest producer and exporter. Last year the country made 937.5 million euros ($1.04 billion) selling to 133 different countries; a four percent increase on the previous year. All told cork adds up to around 7.5 percent of all Portuguese exports - and there seems no end in sight.

In addition to cork bottle stoppers, which still account for three quarters of production, cork is becoming increasingly important as a building material. Even the fashion industry has discovered the qualities of cork.

Carlos de Jesus, the marketing director of Amorim, blames Birkenstock, the German sandal maker. "It all started with a cork sandal from a famous German company." Adding "now there are even umbrellas and expensive miniskirts made from cork."

It's a fashion trend that Portuguese and international designers have embraced. Meanwhile, demand is high for handbags, hats, writing utensils and aprons. Cork is used by the space industry as an insulation and is popular in the aircraft industry because it is so light-weight. Cork can even make streetcars better. Amorim is now working with Siemens in order to build the lightest streetcar in the world. "By replacing other materials with cork, we were able to reduce the weight by 18 tons," says de Jesus.

… to a building material

Cork is becoming especially indispensable in construction. It can be used as a high-quality floor or wall covering. And it protects against noise, cold and moisture. These composite sheets and tiles make up almost a quarter of Portugal's cork exports. "We are already selling around 110 million euros in this area," calculates de Jesus. "Germany is our biggest customer." 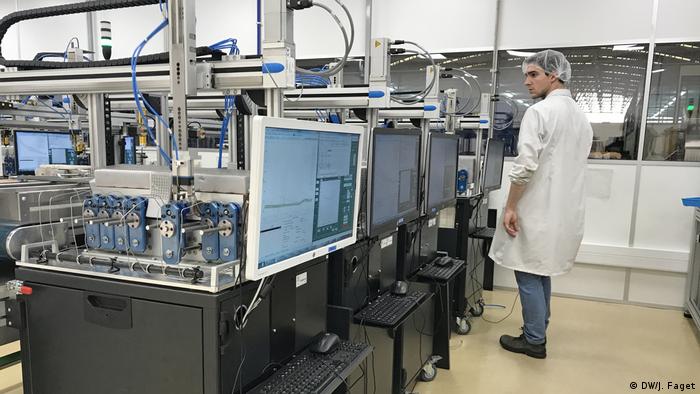 The company has its own laboratory which is looking into cork taint.

Bottle stoppers have changed a lot. In some countries, such as Germany, screw caps are gaining ground. But the world market for classic cork stoppers is still growing.

Cheaper press corks made from cork granules are expected to compete with screw caps made of aluminum in the lower price segment. "The prices start at three cents. But the best natural corks can easily cost two euros or more," says de Jesus.

A fight against cork taint

There are differences in quality. "We have invested a lot of time and money to improve our corks," assures de Jesus. Above all the Portuguese cork manufactures have called for action against "cork taint." 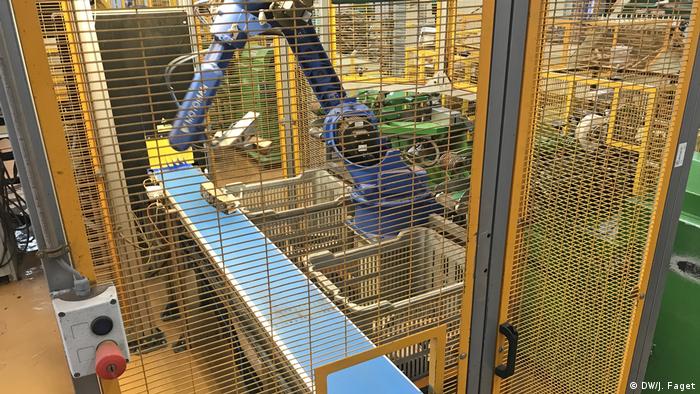 Cork taint is produced by a substance called TCA. Even the tiniest amounts can ruin a bottle of wine. Because of this, today corks are analyzed and cleaned several times. "Thanks to modern methods, we can now even guarantee that our corks are TCA-free," assures de Jesus.

Cork has become a Portuguese success story. Despite the fact that such trees are a long-term investment, even the 750,000 hectares (1.85 million acres) of cork oak forests which have been long neglected are growing again. Though to remain sustainable a cork oak can only be stripped after 25 years for the first time and subsequently only every ten years after that.

On the other hand the technical progress in the processing of cork bark is accelerating. The men working Amorim's punching machines may soon be a thing of the past. The first punching robots are already working right next to them. These robots also check the quality of the cork before they cut - doing the job electronically and twice as fast.

With its varied landscapes and climate zones, Europe has a lot to offer wine lovers. Join us on a pictorial journey of pleasure from the Mosel to Bordeaux and from Tuscany to Tokaj. (26.10.2015)