The Ukrainian president has pledged 2.3 billion euros ($3 billion) in defense spending to reequip the country's military. The announcement was made at celebrations to mark the 23rd anniversary of Ukraine's independence. 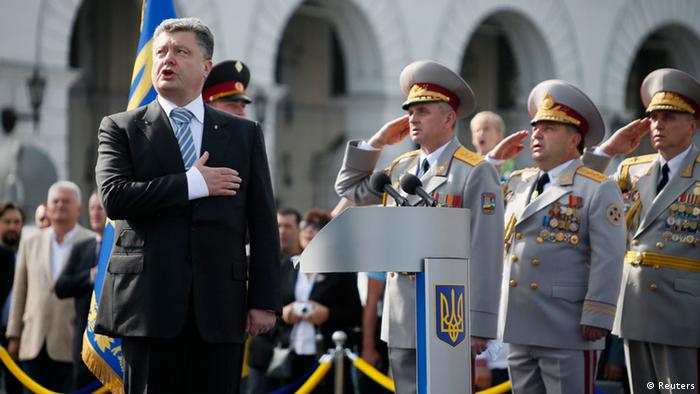 The extra funding will be used to buy warplanes, warships and helicopters for Ukraine's military over the next three years, President Petro Poroshenko said in Kyiv on Sunday at a military parade to mark 23 years of independence from the Soviet Union.

Speaking before thousands of people in the capital's Independence Square, Poroshenko called the pledge "only the modest beginning" of the rebirth of the country's defense forces.

"It is clear that in the foreseeable future there will always, unfortunately, be the threat of war," he said, adding that Ukraine "must always be prepared" to defend its independence.

As the procession of hundreds of uniformed soldiers and armored vehicles took part in Kyiv's Independence Day celebrations, separatists in the eastern Ukrainian city of Donetsk held a parade of their own.

According to witnesses, dozens of Ukrainian prisoners of war were rounded up in the town center and forced to march down a main street before jeering onlookers. The rebels also paraded tanks and artillery captured from government forces.

Ukraine's cash-strapped army has been embroiled in a conflict with pro-Russian separatists in the country's east since the beginning of April. Government forces have made steady gains in the past few weeks; however, the rebels still control the major cities of Luhansk and Donetsk near the border with Russia.

There was heavy shelling in Donetsk over the weekend. Early on Sunday, a bomb hit one of Donetsk's main hospitals, sending staff and patients fleeing to the basement. No casualties were reported.

Meanwhile, German Chancellor Angela Merkel has called on both sides to implement a ceasefire. During a meeting with Poroshenko in Kyiv on Saturday, Merkel urged Moscow to engage in a peace plan with Ukraine.

According to the United Nations, more than 2,000 people have died in the conflict, and more than 415,000 civilians have been displaced from the eastern conflict area.

Merkel in Ukraine for talks

German Chancellor Angela Merkel's trip to Ukraine for talks with President Petro Poroshenko comes a day after Russia sent some 200 trucks into Ukrainian territory without permission. (23.08.2014)

German Chancellor Merkel and US President Obama have warned of a "dangerous escalation" in Ukraine after Russia moved convoys into the east of the country. An emergency UN Security Council meeting was held on the issue. (23.08.2014)