Pope Francis and Patriarch Kirill have held the first meeting of a Catholic pope and the head of the Russian Orthodox Church in almost 1,000 years. They signed a joint statement condemning the persecution of Christians. 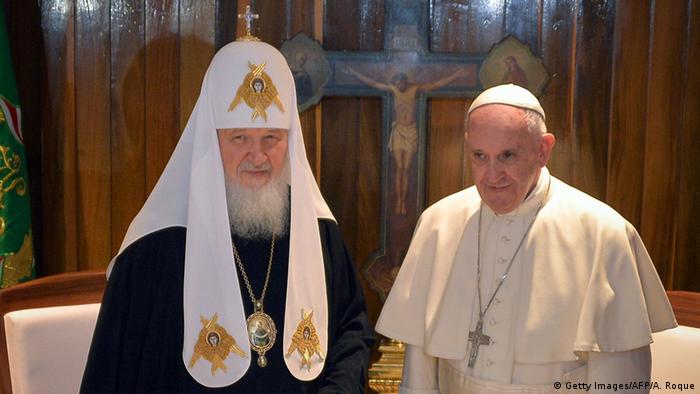 Pope Francis and Patriarch Kirill exchanged kisses and embraced each other before sitting down smiling for the historic meeting at the airport in Havana on Friday. The pontiff is hoping to overcome a nearly 1,000-year-old rift in Christianity dating back to the Great Schism of 1054.

"At last we meet. We are brothers," the pope said as the two church leaders met. "Clearly this meeting is God's will."

Their meeting, which was only announced a week ago, had been decades in the making and each detail carefully selected ahead of time. The fact that the two religious leaders had decided to come together on neutral ground for a meeting hosted by the atheist Cuban leadership carried a certain amount of political significance. Cuba's rich Catholic tradition as well as its close relations with Moscow during the Soviet era provided an appropriate mix of cultures and values to serve as a backdrop to the historic encounter.

The two church leaders met for about three hours and later signed a joint declaration on the contemporary persecution of Christians in parts of Iraq and Syria and elsewhere in the world. Despite recent clashes between Russia and the West over Syria's future, the signed declaration gave hope for further common ground to be found.

The pair said they wished to express "compassion for the suffering experienced by the faithful of other religious traditions who have also become victims of civil war, chaos and terrorist violence."

"Thousands of victims have already been claimed in the violence in Syria and Iraq, which has left many other millions without a home or means of sustenance. We urge the international community to seek an end to the violence and terrorism and, at the same time, to contribute through dialogue to a swift return to civil peace," the joint text said. 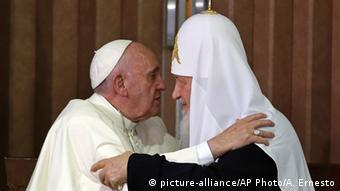 The meeting was hailed as an important ecumenical breakthrough, but differences between Kirill and Francis were also evident from the start. Even as they joined arms, Francis' white gown and skullcap provided a stark visual contrast to Kirill's domed hat with a white stole hanging loosely over black robes. The difference in vestments was echoed in the spiritual and political differences between Kirill and Francis, as in the bigger picture, relations between the churches remain strained.

Recently, there has been a great deal of disagreement over the special status of the Ukrainian Greek Catholic Church, the country's second-largest religious institution. The Russian Orthodox Church disproves of the Ukrainian Greek Catholic Church, which while following Eastern Church rites answers to the pope. The Russian Orthodox Church traditionally considers western Ukraine its territory.

Orthodox Church spokesman Alexander Volkov said he hoped the encounter would open the door to "new prospects of mutual cooperation," but said that reunification of the Eastern and Western churches was certainly nowhere on the agenda. He added that the Orthodox Church would not move toward accepting the primacy of the Roman Catholic pope.

Since ascending to the papacy in 2013, 79-year-old Francis has pushed to make the Vatican a more active player in international diplomacy. The leader of the 1.2 billion-strong Catholic Church had framed the meeting in a broader context of engaging not just the Orthodox Church but Russia as well. Francis has received Russia's President Vladimir Putin at the Vatican twice and has cautioned world leaders to show restraint in criticizing Russia's involvement in Syria.

A spokesman for the Orthodox Church in Moscow, however, insisted that there was no political motivation behind the meeting.

The pontiff had previously played a role in the rapprochement process between the United States and Cuba, which restored diplomatic relations in 2015 after a 54-year break.

After today's meeting, Francis embarked on a five-day visit to Mexico with a message of solidarity with the victims of drug violence and human trafficking, while Kirill continued to South America.

Pope and Russian patriarch to meet for the first time

The Vatican and the Russian Orthodox Church have announced that Pope Francis would meet Moscow Patriarch Kirill for the first time. The two religious leaders are set to discuss the persecution of Christians. (05.02.2016)

Patriarch Kirill of Moscow is an ally of Russian President Vladimir Putin and shares his anti-Western views. That's made him a target of European Union sanctions.

Pope Francis has criticized the war in Ukraine as a "cruel and senseless" conflict. In his Easter "Urbi et Orbi" address he also called for reconciliation among Israelis and Palestinians, and in other conflict zones.