Pope Francis is in Albania on a visit intended to promote interfaith harmony. He is to meet with heads of a number of religious communities during his 11-hour stay. 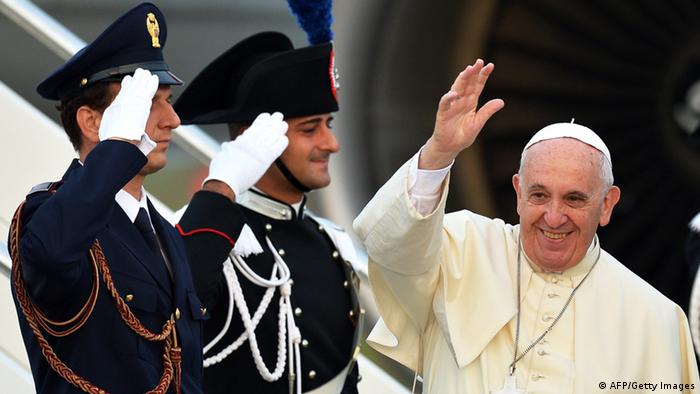 Pope Francis arrived in Albania on Saturday on what is only the second papal visit to the country after Pope John Paul II travelled there in 1992, a year after communism in the Balkan nation collapsed.

Security is tight for the pontiff's trip amid reported threats of planned attacks by Islamic militants on the Roman Catholic leader. Albania has raised the police force alert to its highest level, with the Interior Ministry promising "maximum" protection by the deployment of 2,500 police and the setting up of 29 security checkpoints in the capital, Tirana.

Some observers have voiced concerns that Pope Francis may have become a target for such attacks following his comments condemning the actions of the jihadist organization "Islamic State" (IS) and the Vatican's support for US air strikes against IS in Iraq to protect persecuted Christians there.

The Vatican itself says it has not increased security for the trip, and the pope will use the same open-topped vehicle in which he travels in Saint Peter's Square.

The 11-hour visit is part of the first European trip to be made by Francis, who became pope in March 2013. He said in August that he had chosen Albania as the first destination because it has set a model for harmony between the various religions by establishing a national unity goverment that includes Muslims and Orthodox and Catholic Christians.

During his stay, the 77-year-old Argentine pontiff will meet Albanian President Bujar Nishani, celebrate mass in Mother Teresa square in Tirana, and meet with religious leaders, including those of the Muslim, Orthodox, Bektashi, Jewish and Protestant faiths.

He also intends to honor those persecuted under the rule of former communist dictator Enver Hoxha. Some 130 Christian clergy died in detention or were executed during the 1944-1985 dictatorship of Hoxha, who declared Albania the world's first atheist state in 1967.

Pictures of some of the priests persecuted or executed during the period were hung in Tirana's main Martyrs of the Nation boulevard ahead of the pope's visit (photo above).

Albania has since seen a revival of Catholicism partly owing to the popularity of Mother Teresa, who had Albanian origins despite being born in what is now Macedonia.

Some 59 percent of Albania's population are Muslim, while Catholics make up 10 percent and Orthodox Christian slightly less, according to official figures.

The impoverished country of three million is also likely to see the pope's visit as a boost to its bid to join the European Union.