When Joseph Ratzinger was elected pope, he got mixed reactions in his native Germany, with many reform-oriented groups fearing the bite of the man known as "God's Rottweiler." Now, some critics have changed their tune. 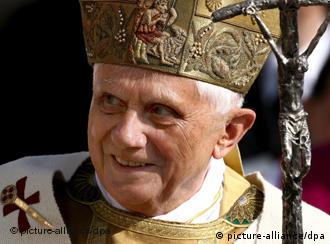 The announcement that Cardinal Joseph Ratzinger was to become the next pope caused cheers of joy to erupt from the crowd of faithful pilgrims gathered in St. Peter's Square one year ago.

In Germany, too, the news inspired a sense of awe and pride that a countryman should be elected to lead Catholics around the world. But at the same time, Germany's large community of reform-oriented Catholics shuddered. They predicted that Ratzinger, with his reputation as a hardline conservative, would catapult the Church back to the Middle Ages. 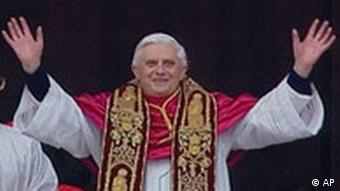 Many also said that the new pontiff would fail to connect with Catholic communities around the world. His stern manner would alienate him especially from young Catholics, a much-needed demographic that had so successfully been courted by his predecessor, John Paul II.

A year on, reactions to Pope Benedict XVI are no longer so extreme. Even organizations that at first habitually criticized his every move have begun according him respect.

The liberal Swiss theologian Hans Küng, who was among Ratzinger's most vocal critics, now finds he has something positive to say about the man he's known since they worked together at the Second Vatican Council in 1962-1965.

"Up to now, the worst fears have not been realized," Küng told Reuters. "He has found another style." 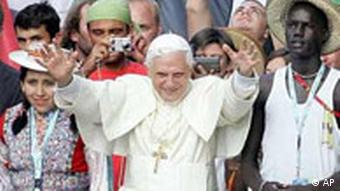 Contrary to the "Rottweiler" image that was so pervasive before his election, Ratzinger's initial appearances as pope were marked with a charming humility. Demonstrating that he does not shy away from his critics, Ratzinger held an audience with Küng shortly after he became Pope.

"There are not two Ratzingers, he has stayed the same person but what has changed is his role," Küng said. "He no longer has to control the teaching and censor the teachers. Now he is responsible for spreading the Christian message in the Church and in the world."

Still, Küng expressed hope that after his first year in office, Benedict would move forward with reforms.

"He has obeyed the Roman saying 'primo anno oculus' -- in the first year, keep an open eye. He has watched things cautiously. I hope that, in the second year, he moves forward and undertakes reforms. Now he should act with a strong hand."

Germany's reformist national "Kirche von Unten" (Church from Below) group, however, was more guarded in its assessment. Pope Benedict may not have turned out to be the "catastrophe" predicted a year ago, but many of the group's fears have been confirmed, managing director Bernd Göhring told DW-WORLD.DE.

"It's good, for example, that he places such emphasis on reaching out to young people," he said. "However, I question how this is being implemented. Youth work is not just about praying and singing, it's about educating young people to be tolerant and respectful."

Similarly, Göhring commended Benedict's work on creating dialogue with the Orthodox churches, but said he wished he "would do the same with the Protestant churches."

On the issues of the role of women in the Church and the Church's treatment of gays and lesbians, the pope has "confirmed our worst fears," Göhring said.

German cardinals have expressed satisfaction with Benedict's performance during his first year as pope.

"He's brought peace to the Catholic Church," Cardinal Walter Kasper told public broadcaster ARD. "John Paul II exaggerated many things -- he had too many cardinals, too many saints, too many documents, too many activities."

Benedict has brought things back to a more normal level, he said. 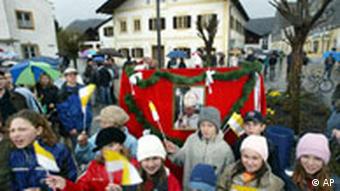 The head of the Catholic Church in Germany, Cardinal Karl Lehmann, echoed remarks he made a year ago when he lauded the fact that, 60 years after the end of World War II, a German could be pope. A year on, he said this had been good for Germany.

"I have the impression that respect towards us Germans has grown a bit," Lehmann told ARD. "I said once before that we had a false image of Ratzinger. He is much more sensitive and sophisticated, and it was clear to me that, should he become pope, he would enjoy having other duties and other issues to address."

After initial uncertainty, white smoke rose from the chimney of the Sistine Chapel indicating the election of a new pope. Bavarian Cardinal Joseph Ratzinger became the 265th pope. (April 19, 2005)