After initial uncertainty, white smoke rose from the chimney of the Sistine Chapel indicating the election of a new pope. Bavarian Cardinal Joseph Ratzinger became the 265th pope. 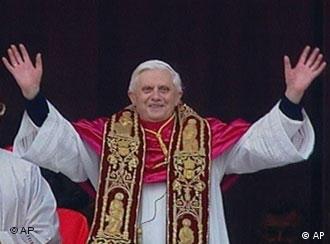 The conservative cardinal was close to Pope John Paul II

Germany's Joseph Ratzinger was elected pope for the world's one billion Catholics on Tuesday evening. He chose the name Benedict XVI.

The new pontiff briefly addressed the hundreds of thousands of Catholics gathered at St. Peter's Square from a balcony on St. Peter's Basilica.

"Dear brothers and sisters, after the great Pope John Paul II the cardinals have elected me a simple and humble laborer in the vineyard of the Lord," he said, paying tribute to his predecessor.

The throngs of Catholics filling the square had greeted with cheers smoke -- which first appeared black, but then turned white -- spewed from the chimney of the Sistine Chapel around 6 p.m. (1600 UTC) to signal the cardinals had reached a two-thirds majority.

After a few minutes, the bells of St. Peter's Basilica began pealing, confirming the election of a new pope.

Soon after, Ratzinger appeared on the balcony to the gleeful cheers of the thousands that had gathered. In Germany, a crowd began to gather in the pouring rain in Regensburg, where the new Pope was a longtime university professor. 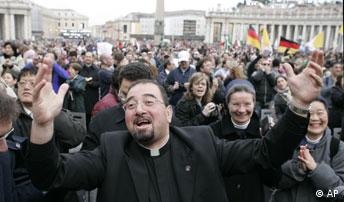 Priests celebrated as white smoke billowed from the chimney of the Sistine Chapel at the Vatican, on Tuesday

Ratzinger is considered one of the Catholic Church's most powerful and most orthodox clergymen. But it wasn't always that way. As a young man in Bavaria, caught up in the reform-fervor that accompanied the 1960s student revolts, Ratzinger was known as someone to support reforms in the church.

But that changed when Pope John Paul II was elected in 1978, Ratzinger -- made a cardinal in 1977 -- quickly developed into his right-hand man. The two shared similar conservative views against women in the church, abortion and pregnancy counseling centers. He once called abortion a "culture of death." Ratzinger also squabbled with three German cardinals in 1994 about divorcees being allowed to marry again in the church. 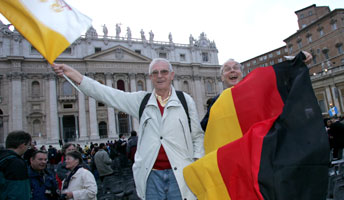 Tourists wave the Vatican and German flags as they celebrate in St. Peter's square at the Vatican following the election of the new pope

German politicians lined up to praise the new pope, the first from Germany in over 480 years.

"I congratulate him heartily in the name of the German government and all the citizens of his home country Germany," German Chancellor Gerhard Schröder said.

At 78, experts consider him a "transition pope" who won't hold the title as long as his predecessor John Paul II, who was pope for 26 years.

After being tucked away in secret conclaves in the Sistine Chapel on Monday, the 115 cardinals of the conclave voted three times before coming to agreement on the new pope.

The vote is considered to have been one of the fastest in history.

Congratulations flooded in for Pope Benedict XVI's from his German compatriots, after Cardinal Joseph Ratzinger was elected the Catholic world's leader on Tuesday. But some in Germany viewed the choice as a mistake. (April 19, 2005)

If his past statements are any indication, Pope Benedict XVI will continue to tread the conservative line that was among the defining characteristics of his predecessors long reign. (April 19, 2005)