Pope Francis has met with Rwandan President Paul Kagame and asked forgiveness for the "sins and failings" of the Catholic Church and its members. Some priests fanned and aided the 1994 genocide against the Tutsis. 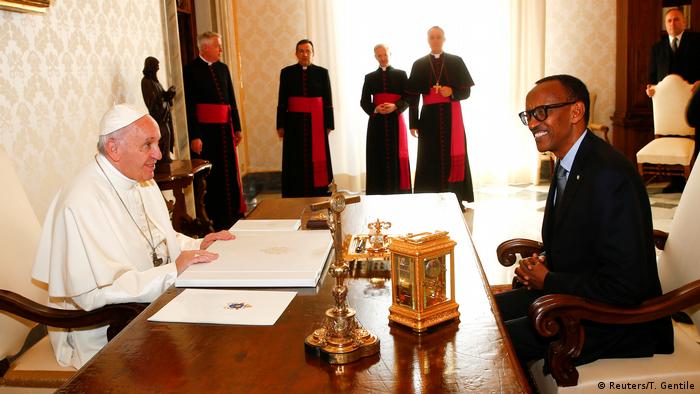 Catholic Church in Rwanda apologizes for role in genocide

In a statement, the Catholic Church in Rwanda officially said it regretted the actions of clergymen and nuns who participated in the 1994 genocide. (21.11.2016)

20 years ago, rebels led by Paul Kagame put an end to the genocide in Rwanda. Today he is the president of a country enjoying rapid economic growth. But Kagame still sees himself at war. He will not tolerate opposition. (04.04.2014)

The French ambassador in Kigali has said that he is no longer invited to ceremonies marking the 20th anniversary of the genocide in Rwanda. Rwanda had accused France of being "associated" with the 1994 killings. (07.04.2014)

While meeting Kagame in the Vatican, Pope Francis said that he hoped the apology would help a "future of peace."

"He implored anew God's forgiveness for the sins and failings of the Church and its members, among whom priests, and religious men and women who succumbed to hatred and violence, betraying their own evangelical mission," the Catholic Church said in a statement.

Between April and July of 1994, members of Rwandan Hutu majority indiscriminately killed around 800,000 Tutsi and moderate Hutu in a 100-day genocide. Several survivors said that Catholic priests and nuns personally killed members of the Tutsi minority. Others testified that the clergy betrayed people who tried to seek refugee in Catholic churches.

During the ceremony marking the 20th anniversary of the genocide in 2014, Kagame himself accused the Catholic Church of having "participated fully" in establishing the colonial ideology that created the chasm between Hutus and Tutsis.

Paul Kagame, now the president of Rwanda, led a military force that eventually stopped the genocide in 1994.

Rwandan bishops signed a letter of apology that was read in all Catholic churches in the country last November. However, the government in Kigali said that this gesture was not enough.

The Church is now "facilitating" efforts to heal the society and help the survivors, according to Rwanda's top diplomat, Louise Mushikiwabo, who also traveled to Vatican with Kagame.

However, Mushikiwabo said that there are still people protecting genocide perpetrators.

"Today, genocide denial and trivialization continue to flourish in certain groups within the Church and genocide suspects have been shielded from justice within Catholic institutions," she said.

While the Vatican still has a strong presence in Rwanda, with almost 44 percent of the population identifying as Catholic, many worshipers turned to other Christian denominations after the genocide.