At the Doha talks, environment organization Germanwatch has presented its climate risk index, showing which countries are most affected by climate change: of course, it's the poorest that are worst hit. 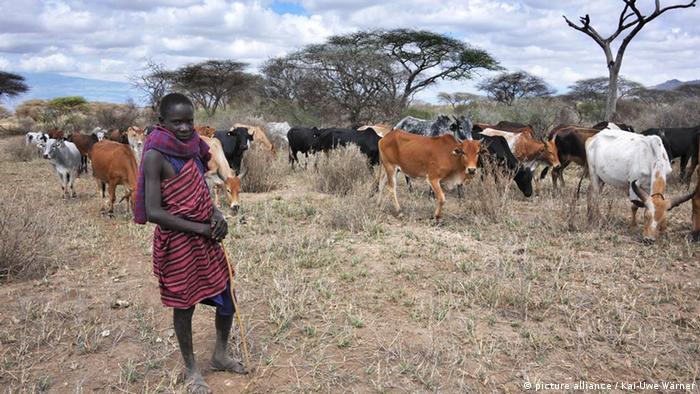 "It rained ten days in a row on one occasion," Antonia Canas Calderon recalls, "and the amount of rain in 2011 was 41 percent higher than the average for the last four decades." As a result of the increase, El Salvador lost over one third of its GDP, says Canas who's at the Doha conference as part of El Salvador's delegation to the climate talks. 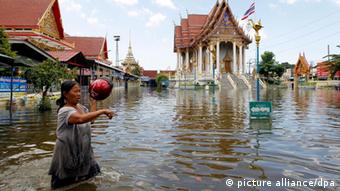 In Thailand, floods have devastated parts of the country

It's that rainfall that has put El Salvador fourth in the ranking of the climate risk index. The chart, which was presented by the environment organization Germanwatch on Tuesday (27.11.2012), was compiled with data from the Munich Re reinsurance company, Germanwatch looked at the economic damage and the number of deaths caused by climate change and ranked the countries accordingly.

At top of the 2011 ranking is Thailand. Flooding there cost the lives of almost 900 people and caused damage worth more than $75 billion in the country.

A consequence of climate change

Germanwatch points out in the report that individual weather catastrophes like the floods in Thailand or the heavy rainfall in El Salvador can not be traced back to manmade climate change. But still, says the group's Sven Harmeling, some weather events can not be explained without climate change. Christoph Bals, political head of Germanwatch explains: "When there are extreme weather events which normally would happen only every 4,000 years, then that usually can be attributed to climate change." As an example he mentions the record heat in Europe in summer 2003.

A heat wave is easier to link to climate change than rain, Bals explains. After all, climate change has led to an increase in average temperatures worldwide. In that respect, scientists could be fairly certain that the periods of heat and drought that the US states of Texas, Oklahoma, Louisiana and New Mexico saw in 2011 were indeed the results of climate change.

US in the top ten 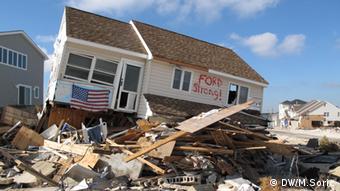 Sandy reminded Americans of the risks of climate change

But it's not only that heat-wave that put US in the climate risk top ten. Tornados and Hurricane Irene have also played their part. According to Jonathan Pershing of the US delegation at Doha, 2011's extreme weather, together with droughts and Hurricane Sandy in 2012, have "changed the awareness among the US population."

"The media is increasingly covering the connection between this extreme weather and climate change, and people realize that climate change is a problem," says Jennifer Morgan of the US environment organization World Resources Institute. Yet but that doesn't necessarily mean that this will lead to a change in US climate policy.

After the re-election of Barack Obama and as a result of Hurricane Sandy, Morgan says, many are hoping that Obama will take climate issues seriously now in his second term. But she cannot see any concrete measures and doesn't expect any more US commitments to CO2 reduction at Doha.

But the United States is not representative of the countries affected. Among the ten countries that suffered most in total between 1992 and 2011, there's not a single industrialized nation. On the contrary, it's poor counties like Honduras, Myanmar, Nicaragua and Bangladesh that have been at the eye of the climate storm. 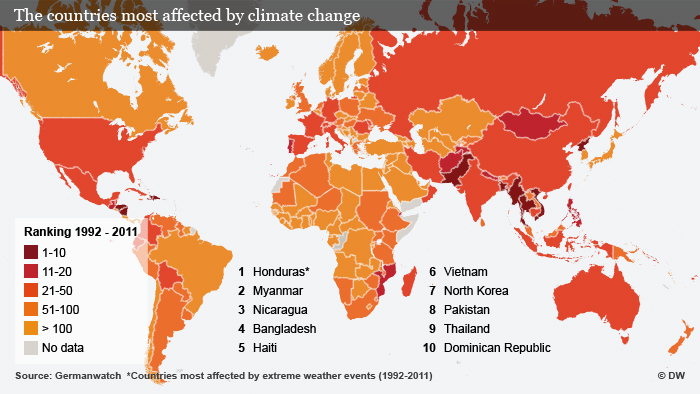 Bangladesh in particular is at danger, with its geographical location on the low-lying delta of the River Ganges. All the same, in the long term climate risk index, which goes back to 1992, Bangladesh has fallen from first to fourth place. The reason, says Saleemul Huq of the International Centre for Climate Change and Development at the Bangladesh Independent University, is that, even though the number of cyclones has increased, the country has managed to reduce the number of victims. During the two most recent cyclones, authorities managed to successfully evacuate two million people.

That success was thanks to an early warning system and better education in schools. "In the past, people didn't understand the signals and didn't know when they had to go to the shelters," Huq says. "Now children learn this in school and they can tell their parents and grandparents at home what to do when there's an alarm."

A question of money

Improving the early warning systems, says Huq, was not just down to the money coming as aid from the industrialized world. Yet if the world's Least Developed Countries (LDC) were asking for more money in Doha to cope with the consequences of climate change, it was the responsibility of the industrialized world to let them have it: "After all, these are not god-given weather events."

That's a view shared by Monica Lopez Baltodano of the environment group Centro Humboldt in Nicaragua. "The industrialized countries with their emissions are the ones causing the increase in temperatures across the world but they leave us poor countries alone with the consequences," she says. "That's why we're calling for technology transfer and financial compensation for the damage to our countries."

Christine Todd Whitman, the former governor of New Jersey and former head of the Environmental Protection Agency, the EPA, talks to DW about the US' and Germany's environmental records. (27.11.2012)