Poll shows Europeans have high regard for Merkel

A poll by the European Council of Foreign Relations shows wide respect for outgoing Chancellor Angela Merkel. Meanwhile, Germans themselves are anxious about the future without her. 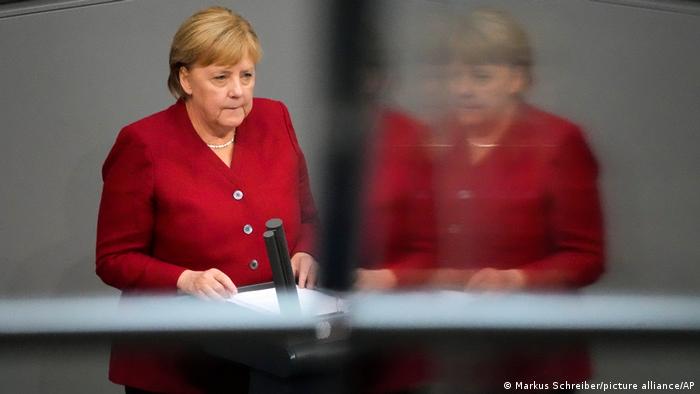 As German Chancellor Angela Merkel prepares to exit the political stage after 16 years at the helm of German politics, European express greater optimism in German leadership than Germans

According to the poll, many Europeans also believe Germany can be trusted as a leading voice for the EU.

Ahead of the Bundestag elections on September 26, the polling also shows Germans struggling to imagine a Germany without Merkel.

The ECFR noted in its report that "Europe's citizens see Germany as an economic powerhouse" but also, paradoxically, a majority see Germany as having already peaked economically.

Europeans had the greatest confidence in German leadership when it came to matters of finance and the economy as well as the defense of European values such as human rights and democracy.

"Although Merkel has always resisted the attribution of 'leader of the free world', EU citizens see her as the leader of a free Europe," the report stated.

However, when it came to dealing with great powers such as the US, China and Russia, there was less confidence in Berlin's ability to lead on equal footing. Many Europeans said they believed Germany puts its economic interests first, such as with the controversial Nord Stream 2 pipeline.

European voters had considerable confidence in Germany on matters of security and defense, despite fears expressed that Germany could fall back on nationalism in the post-Merkel era.

In all countries polled, Europeans would support Merkel over French President Emmanuel Macron in a theoretical president of Europe — including in France.

Unlike Macron, Merkel has tended toward continuity of the status quo rather than proposals for radical reforms.

The ECFR polling showed Germans were by far the most pessimistic about the future of Germany as Merkel prepares to exit than other Europeans, aside from Austrians who were equally downbeat. Fifty-two percent of Germans believe their country's golden age is a thing of the past.

While Europeans expect Germany to lead after 16 years with Merkel at the helm, "Germans do not seem to be emotionally prepared for the role of Europe's leading power either."

Only when it comes to standing up for human rights and democracy do more than a third of Germans express confidence in Berlin. Germans have less trust in their political elites on financial and economic matters as well as defense and security than other Europeans, but they are also less concerned about an inward turn and rising nationalist sentiment.

The ECFR report in part concludes, "Germans may need to shake off their doubts about German leadership, because other Europeans are counting on it to provide this."

Elections in Germany: Where do political parties get their money?