Over half of Turks living in Germany feel like unwanted guests. The survey was released ahead of the German Islam Conference on Thursday, March 13, where the thorny topic of integration tops the agenda. 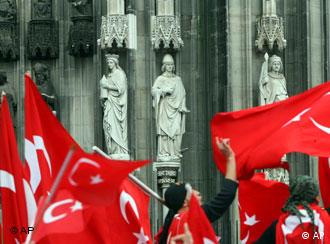 A clash of cultures?

Over three quarters of the Turks surveyed, both with and without German passports, said German Chancellor Angel Merkel didn't adequately represent those in Germany with a Turkish background. The report, based on 400 responses, was published in the Wednesday edition of Die Zeit.

Ninety-two percent said they thought that "Turks in Germany should preserve their own culture," and nearly as many (89 percent) felt that German society should be more considerate about the customs of Turkish immigrants.

Nevertheless, a sweeping majority (83 percent) considered the German language a key to success as an immigrant and two-thirds didn't regret their decision to come to Germany.

"The opinions represented in the survey show that we have to do more to strengthen the feeling of belonging for those in Germany with Turkish backgrounds," said Germany's Integration Commissioner Maria Boehmer. "The 2.7 million people in Germany from Turkish families belong to us; they're an important part of our society."

Round three for Islam dialogue 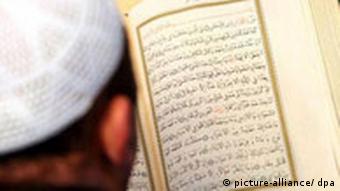 Interior Minister Wolfgang Schaeuble on Thursday is to meet with representatives from a variety of German Muslim organizations as the third part of an ongoing series of Islam conferences intended to span two to three years.

The aim of the conference, which will cover topics like constitutional values, social order and the media, is to better integrate the estimated 3.4 million Muslims living in Germany.

Several of the organizations present are considered to be fundamentalist -- including the Milli Gorus Turkish-Islam Association (IGMG), the Islamic Society in Germany (IGD) and the Association of Islamic Cultural Centers (VIKZ) -- and do not necessarily represent the majority of Muslims in Germany.

Ahead of the conference, Schaeuble opened the door to establishing Islam religion classes in German schools. Religion is part of the standard curriculum, with most students participating in courses on the Catholic or Protestant faiths.

As a prerequisite, Islam would have to be formally recognized by the government as a religious group, said the minister. The courses would be conducted in German. 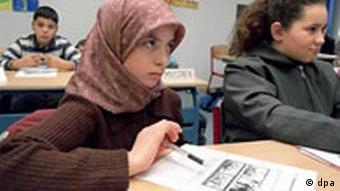 "We're going up against hate preachers any way we can," Schaeuble said Thursday in an interview with Stern Online. "With Islam religion classes, we'd create competition."

Also on Thursday, Turkish Prime Minister Recep Tayyip Erdogan expressed regret that German Chancellor Merkel did not attend the mass rally he held for Turkish immigrants during his visit to Cologne in February.

"If we had stood on the stage together there, it would have been a message to the German society and a motivation to the Turks living in Germany," said Erdogan in an interview with the Frankfurter Allgemeine Zeitung. "We can make it up whenever Ms. Merkel likes."

Erdogan had attracted criticism in Germany when, during the rally, he warned Turks in Germany not to lose their culture. Merkel had responded by saying she didn't share the prime minister's view of integration.

"Assimilation is tantamount to a crime against humanity," Erdogan had said in February. 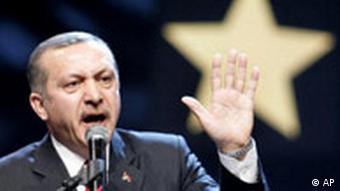 Erdogan irked some with his thoughts on integration

It's thought-provoking that thousands of people in Germany feel better represented by Erdogan than by German politicians, commented Armin Laschet, integration minister in the state of North Rhine-Westphalia.

Immigrants should know that they are not obliged to assimilate, he added. Instead, "the conference aims to compel everyone to adhere to the values of the constitution and the laws that have effect in Germany."

A series of events in recent weeks have stoked tension over integration in Germany. In early February, nine Turkish immigrants lost their lives when an apartment building in the south-western city of Ludwigshafen caught fire. The blaze was initially thought to be a case of arson, but authorities later said this suspicion was inaccurate.

What is the key to integration? Please include your name and country in your reply.