Turks in Germany Call for More Government Support | Germany | News and in-depth reporting from Berlin and beyond | DW | 01.03.2008

Germany's Turkish community called on the government to change its integration policy and to pay more attention to the needs of the country's 1.7 million Turks. It suggested a job quota as a step in the right direction.

A five-point proposal released Friday, Feb. 29, in Berlin called for 10 percent of public jobs to go to migrants as well as the introduction of Turkish lessons and a course called "intercultural life" in schools.

The aim was for Turks to enjoy the same rights and participation as others in society, said Kenan Kolat, chairman of the Association of Turkish Communities in Germany.

Kolat also said that immigrants to Germany should receive the right to vote in municipal elections and retain their original citizenship if they decide to become naturalized in Germany. Germany currently does not recognize dual-citizenship.

Turks make up the largest minority in Germany. Statistics from 2006 show 1.7 million residents of Germany are Turkish nationals. Including those acquiring German nationality by birth or naturalization, the Turkish community totals 2.4 million in a population of 82 million. 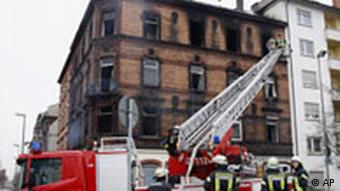 Germany's Turkish community is anxious after a series of fires

Kolat said a recent spate of 17 fires in 24 days in housing complexes used by Turks, including one arson attack, had caused a great deal of unrest among the Turkish community. Only in a few cases were the fires racially motivated, he said, but nonetheless Turks were living in fear and needed Germans' solidarity.

"In many cases these are not attacks, but because the fires occurred in a series, a discussion naturally started in the Turkish population," he said. "And we have the fear that these fires could incite others -- including far-right radicals -- to other attacks."

His comments came nearly four weeks after a blaze in the south-western city of Ludwigshafen claimed the lives of nine Turkish immigrants.

Though the case of the fire remains unclear, initial reports that the blaze was started deliberately were shown by investigators on Thursday to be inaccurate.

Kenan said his organization would cooperate with Germany's trade unions in drafting a code of ethics that would require politicians to refrain from creating an anti-migrant sentiment.

Earlier this year, the state premier in Hesse, Roland Koch, caused outrage by highlighting crime committed by young foreigners when campaigning for re-election.

Do you think there should be a quota for migrants in the public sector? Send us your comments and please include your full name and country in your reply.