Polish voters are heading to the ballot boxes to choose their country's preeminent political party. The incumbent Civic Platform party is looking strong, but there are others in the wings ready to take over. 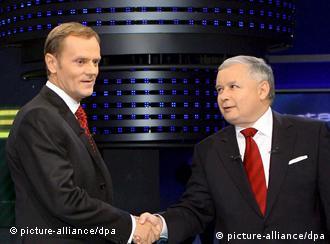 An incumbent party hasn't won a Polish general election since 1989

Poland is set to determine on Sunday whether Prime Minister Donald Tusk's centrist Civic Platform party remains in power. If it does, it will be the first time one party has won two consecutive terms since 1989.

The backbone of Tusk's campaigning has been on his economic record, having steered the nation of 38 million fairly successfully through the worst of the financial crisis in 2009. He's also appealing for moderation, recalling the political rifts caused by his opponent Jaroslaw Kaczynski's premiership in 2006 and 2007.

"This is a new Poland, requiring cooperation, understanding and unity," he said while campaigning. 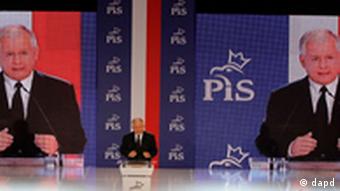 Kaczynski, head of the conservative Law and Justice Party, made headlines shortly before election day, cautioning his countrymen against German imperialism. Kaczynski has a history of making inflammatory remarks.

"[Tusk]'s a sensitive politician who understands the complexity and historical context of our relations," Marcin Poprawski, lecturer at the Adam Mickiewicz University in Poznan told Deutsche Welle.

"Kaczynski - his advisors and he personally - don't understand this properly," he added. "They love to play the German card shortly before elections for inexperienced Poles who have nothing to do with Germans on a daily basis."

Third in some polls is a new liberal party, Polikot's Movement, billed as anti-Catholic, supporting gay rights, soft drugs and abortion. The popularity of this party could mean Polikot's Movement will play some part in a coalition government.

On the eve of a general election, Poland's nationalist opposition leader Jaroslaw Kaczynski is trying to win votes by stirring up fears that Germany wants to reclaim lost territories. (07.10.2011)

A new report by Polish investigators has shed more light on the 2010 plane crash in which the country's president and many officials were killed. The Polish defense minister stepped down Friday in the wake of the report. (29.07.2011)