Elections in Poland focus as much on religion as economy | Europe | News and current affairs from around the continent | DW | 06.10.2011

Poland's ruling Civic Platform party has the lead in polls ahead of elections this weekend. But a new party campaigning for a break with the Catholic church in politics stands a chance at making it into parliament. 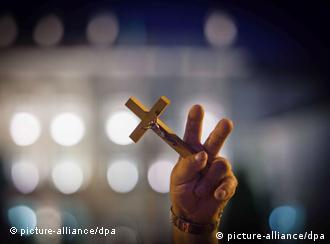 Polish voters are set to elect a new parliament on Sunday, with the role of the Catholic Church in politics expected to take center stage alongside the country's economic future.

An opinion poll released on Thursday by the Gazeta Wyborcza daily showed Prime Minister Donald Tusk's centrist, pro-market Civic Platform party ahead with 31 percent, a comfortable lead over the main opposition party, the conservative Law and Justice, which 18 percent support.

But the biggest unanswered question is how the smaller parties will fare, and with which one Civic Platform may be able form a coalition government. The growing anticlerical Palikot's Movement, formed recently by controversial business tycoon Janusz Palikot, won 10 percent of voter support in the poll. 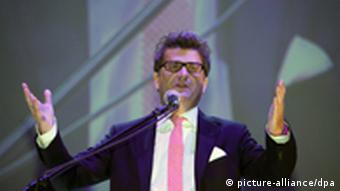 Palikot became notorious in Poland's conservative circles because of his outspoken attacks on the church. Insiders say this was also the reason why he was kicked out of the ruling Civic Platform party, which was keen not to upset the church. In this election campaign, Palikot has made anticlericalism his main weapon.

Palikot's Movement is the virtual antithesis to Catholic conservatism. Platform issues include the legalization of marijuana, liberalized abortion laws and civil unions for same-sex couples.

Its candidates include Anna Grodzka, a transsexual woman whose public battle with the Polish legal system after sex reassignment surgery made her something of a celebrity, and Poland's best-known gay activist, Robert Biedron.

In one TV spot, Biedron explained that there is more to Palikot's party than trying to shock conservatives. He said candidates like him are true representatives of civic society who intend to fight for the rights of those who have not been adequately represented.

Despite accusations of church meddling in Polish politics, forces loyal to the country's powerful Roman Catholic church show no signs of changing their strategy. 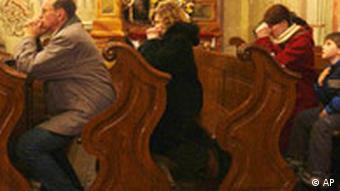 Poles are overwhelmingly Catholic, but not all want the church involved in politics

Catholic intellectual Zbigniew Nosowski, editor of the Wiez magazine, said that while not being directly involved, the church sees its role as providing guidance to the faithful, including on political matters.

"For Polish society which is so predominantly Catholic, the way of involvement of the Catholic hierarchy in political elections is important," he said. "If people are disoriented, they ask their priests, who are supposed to be kind of leaders of community of believers about their opinion."

Law and Justice, the conservative opposition party led by former Prime Minister Jaroslaw Kaczynski, enjoys the unswerving support of Poland's Catholic media. But the cozy relationship between politicians and the church has produced a backlash, evident by the party's falling numbers.

When Civic Platform leader Donald Tusk rose to become prime minister four years ago, it was largely thanks to the support of younger voters. The nation's youth had largely turned against the fractious and anti-European Kaczynski government, and Tusk promised them jobs in a thriving economy.

On his election trail, Tusk has still focused on the young. His message was similar to that of previous campaigns: His party is open toward Europe, while Kaczynski's nationalists are inward-looking and likely to lead Poland into a cul-de-sac.

"I realize that my government is perhaps regarded as less cool and trendy than it was four years ago," said Tusk. "But I'm still counting on young people. I can guarantee them a safe passage through the troubled waters of European finances. We can keep the Polish economy growing."

But that has only partly come true. Even though Poland has been spared the economic woes suffered by many other European Union countries - the Polish economy grew by an impressive 3.8 percent in 2010 - growing numbers of voters now describe Tusk's cabinet as lacking direction.

"A lot of people feel kind of disappointed, because it takes longer than just four years to adjust and feel the benefits of having a good economy," said business journalist Tomasz Cwiok. "It takes time to create opportunities."

Cwiok referred specifically to the minimum wage and purchasing power of the average Pole. He said those are not rising fast enough, "especially to those who enter the labor market. If there's an economic slowdown, we'll be affected, and there's nothing we can do."

All eyes on Warsaw as Poland assumes EU presidency

Poland has taken over the rotating six-month EU presidency from Hungary. The nation is eager to make a good impression on the political stage as a reliable partner who can expertly manage despite a crisis. (01.07.2011)

Germany and Poland praise their reconciliation as an example for Europe

At a joint session of the Polish and German cabinets in Warsaw, marking the twentieth anniversary of a historic treaty on friendly cooperation, the two countries' leaders describe their relations as exemplary. (21.06.2011)

Voting stations across Poland opened Sunday for municipal elections in which 48,000 regional leaders were to be elected. The elections are regarded as a political barometer ahead of parliamentary elections in 2011. (21.11.2010)

Ukraine: Russian forces occupy all of Sievierodonetsk, says city mayor — as it happened 25.06.2022

Tusk said he took the role with the Civic Platform party to "fight the evil" of the country's conservative leadership. He helped establish the party in 2001 and led Poland as prime minister for two terms.