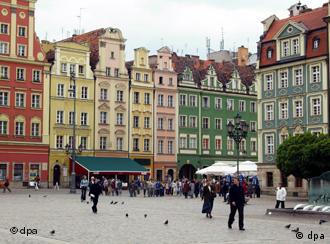 Wroclaw is - and was - a city full of mystery

When crime writer Marek Krajewski tours Poland to meet with his readers, he attracts more fans than nearly any other Polish author, which may be because Krajewski is not the typical thriller writer.

His dark detective novels are very original and feature the feisty, fiercely independent and lecherous Inspector Eberhardt Mock. Krajewski is also a classical scholar with a penchant for Latin verse, literary allusions, and above all, a love of the pre-World War II history of the city of Wroclaw in southwestern Poland - previously the German city of Breslau.

Fascination with the past

Growing up in Wroclaw during the Cold War, Krajewski was intrigued to find out more about the city whose communist rulers had done their best to erase all traces of the German past. 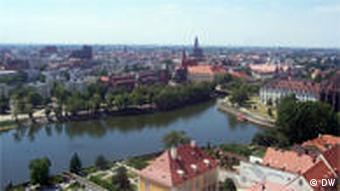 Wroclaw, on the Oder River, was became part of Poland in 1945

Back in the early 1990s, after Communism had fallen and Wroclaw's history was no longer taboo, a large number of photo albums devoted to pre-war architecture were published, said the author. This piqued his interest in the era.

"I practically moved into the Wroclaw University library," he said. "I love leafing through old books, records, historical monographs and address books. I read old 1920s and 1930s German newspapers. This enables me to grasp the flavor of the time."

Thanks to his detailed research, Krajewski knows, for example, which perfumes his main character’s young wife would have used, and which brand of cigarettes inspector Mock would have smoked.

Each story about Inspector Mock starts out as a straight detective novel, along the lines of Agatha Christie or Conan Doyle, but then it drifts off into juicy images of stodgy Silesian cuisine, drinking feasts, Jewish street markets, and local theater productions.

Krajewski includes details from the glamorous lifestyle of Breslau’s rich and famous as well as from the daily lives of the city’s lower classes - including plenty of anecdotes about historical Breslau inhabitants.

City of diversity and integration

Those who think they have picked up an airport novel end up with question marks about the nature of European identity and the overlay of cultures in a city with shifting populations. Until World War II, Breslau had been a place where German, Jews, Poles and other minorities lived together in relative peace and tolerance.

Krajewski "was certainly the first to give this nostalgia a literary shape, bringing the past back, making it more visible and showing the roots, which was not only valuable from the literary point of view, but also culturally acceptable," said literary critic Krzysztof Fordonski.

The way Krajewski structures a literary work out of minute elements of the past is unconventional for Polish literature, added Fordonski. "This gives his books credibility which transcends what we normally expect from a detective story."

Although a feature film about inspector Mock has yet to be shot, several TV dramatizations of the series have already been made. There is also talk of a major Polish-German film co-production that would introduce inspector Mock to mainstream European audiences.

"Krajewski is the first to recreate this world with lots of character, so you are moved back to those times in Wroclaw," said actress Edyta Bach, who grew up in the city. "I think Wroclaw has some mysteries. There are lots of places in Wroclaw which are not yet discovered."

Another taboo to the east 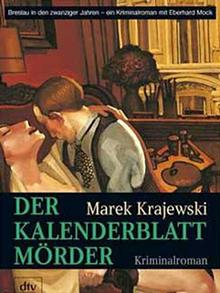 The books have been translated into German and other languages

In his latest novel, "Minotaur's Head," Krajewski sets the scene for a debate about post-war mass expulsions, a topic that remains very touchy in Poland. This time, inspector Mock investigates a grisly murder case involving rape and cannibalism which takes him from Breslau to what was then the eastern Polish city of Lwow, now known as Lviv in western Ukraine.

Breslau is the Ukrainian equivalent of Lwow: After the war, the Germans in Breslau were expelled to Germany, while the Poles in Lwow were forced back into Poland. These post-war expulsions, marked by violence, pilfering, and death, are a painful memory that many have preferred to suppress over the past six decades.

All the book’s characters would have been driven out of their homes. Inspector Mock leaves Breslau and ends up in the US, while the Polish inspector he teams up with in Lwow would most likely have been resettled to Mock’s home town.

Critic Krzysztof Fordonski said that by setting his novel in the two cities on the eve of the war, Krajewski provides a missing link in Central European literature.

"I think that by setting his latest book in Lviv he broke much more of a taboo because we got used to the fact that the western territories of Poland were German until 1945," he said. "But (he addresses) the remembrance of the eastern Polish territories, giving it a literary shape."

Krajewski’s books have been translated into a dozen languages, including German, English and Hebrew. A documentary about his work has won this year’s Polish-German journalists award.

Germany and Poland don't have the smoothest neighborly history. But a German cabaret group is sparking interest in the country and winning Polish fans with a program that includes lots of vodka, music and exaggeration. (10.07.2009)

The Second World War began with the Nazi invasion of Poland on Sept. 1, 1939. Nearly 70 years later, a new exhibit in Berlin's German Historical Museum focuses on the rocky history of German-Polish ties. (28.05.2009)