A decade in the making, the bold, architecturally striking Museum of the Second World War finally opens in Gdansk - but its view of history is being challenged. 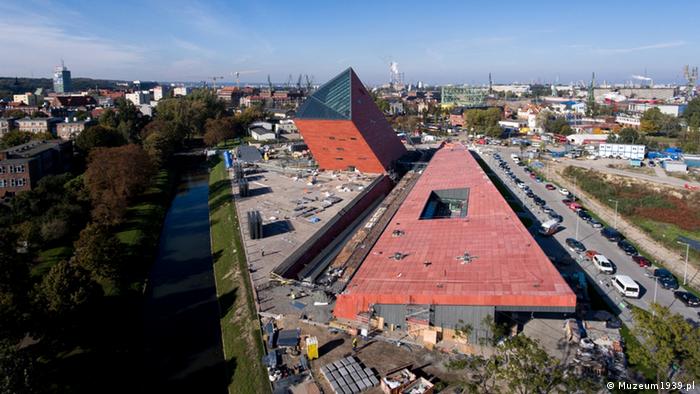 In Gdansk, very close to the old town, in a city district that was completely destroyed during the war, an unusual red brick building has emerged that juts out of the earth at an angle of 56 degrees, like the shaft of a stray rocket that could explode at any moment.

Designed by the Polish architectural design studio Kwadrat, the ambitious building housing the new Museum of the Second World War, which opens its doors on March 23, features a glazed facade and roof that offers a clear view of the city center. But visitors to the museum will need to discover its treasures in the permanent exhibition three floors underground.

The history of a Warsaw apartment

The exhibition begins with three rooms that vividly portray the impact of the war on one Warsaw apartment. We first enter the living quarters in 1939, when a Jewish family is in residence. We then come to the apartment in 1943. The former inhabitants are in the ghetto, a displaced Polish family from the town of Gdynia now in their place. In the final room from 1945, we learn that the son of the new family fought the German occupiers and was killed in the Warsaw Uprising. 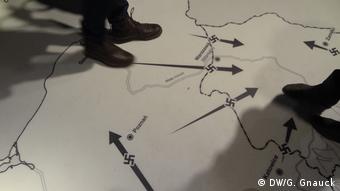 Battle lines at the Museum of the Second World War

The rooms at the beginning of the exhibition are intended for younger visitors and give only a taste of the horrors to come in the main part of the museum. World War II, with its 50 million deaths, is referred to as "the greatest catastrophe in the history of mankind" upon entering the museum.

Three other rooms each represent the totalitarian regimes of the 1930s in the Soviet Union, Italy and Germany. The latter shows a bust of Hitler by official sculptor for the Third Reich, Josef Thorak, which was excavated in 2015 in the garden of the Gdansk National Museum. Other topics covered include the Spanish Civil War and Hitler's expansionist policy.

Finally, the war is dealt with, but not in the sense of major battles. Instead, the focus is on the lives and fates of civilians and soldiers. In a particularly striking hall, a screen shows a long series of photographs of bombing campaigns. The bombardment of Warsaw, London, Hamburg, Dresden, as well as seldom-seen images of the Soviet bombing of Helsinki in 1940, are displayed without explanation. Dmitry Shostakovich's Leningrad Symphony, which the composer dedicated to his hometown, then under siege, is playing in the background. 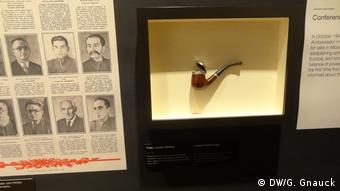 Stalin's pipe on display in Gdańsk

In addition to military equipment such as American and Soviet tanks, the museum displays everyday objects and personal memorabilia, including Josef Stalin's tobacco pipe that was given to the museum by a Danish diplomat. A ladies' bicycle used to smuggle food under the French Vichy regime is also on display, in addition to the house keys once belonging to Jewish people who were murdered by their Polish neighbors in the pogrom of Jedwabne. A handkerchief is shown on which the Pole Boleslaw Wnuk wrote a farewell message to his family in 1940: "Today I will be shot by the German authorities."

The bell from the luxury liner, the "Wilhelm Gustloff," which carried thousands of German refugees before it was sunk by the Red Army in 1945, has also found its way into the museum.

About half of the 2,000 exhibits are gifts or loans, many of them from private individuals. The displays utilize surprisingly little text. In addition to objects, the emphasis is on films, pictures and posters from the time.

In late 2007, Poland's then prime minister, Donald Tusk - who is also a historian and Gdansk native - promoted the idea of creating a museum dedicated to the tragic events of 1939-45 in Poland.

A year later, he appointed historian Pawel Machcewicz to advise on development of the museum, the latter believing it was important to portray the larger context of the entire war, especially across central-eastern Europe. Despite the financial crisis at the time, the Polish government supported the project with well over 100 million euros (over $108 million). 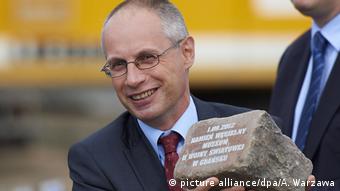 Director Paweł Machcewicz during the laying of the museum's foundation stone

By contrast, Poland's current conservative government has granted the museum, with its 70 employees, a relatively small budget of 2.7 million euros for 2017. It accuses the museum of being "universalistic" and not Polish enough.

A museum that attempts to depict the broader scope of World War II in this way is unprecedented.

However, the institution is already in danger: The government wants to "unite" it with another small museum in Gdańsk and thereby separate it from its director, Machcewicz.

On April 5, the Supreme Administrative Court of Poland will rule on the matter. But Machcewicz will continue to fight: "We have spoken with lawyers and see good opportunities to defend our exhibition, on which we have worked for many years, against changes on copyright grounds."

Poland's Ulma Family Museum is now open - part of an effort at honoring Poles who saved Jews during the Holocaust. But some say museums like it emphasize one part of the country's history at the expense of another. (20.03.2016)

New Polish WWII museum at the center of a political standoff

Poland's populist government wants to take control of the new World War II museum in Gdansk. A last-minute court decision has unexpectedly blocked the takeover, for now - but the complicated legal battle isn't over yet. (01.02.2017)

A Polish court has ruled the governing Law and Justice Party can take control of a major new World War II museum in Gdansk, paving the way for a reframing of history to suit the nationalist party's ideological agenda. (25.01.2017)