Poland's constitutional crisis is deepening after the Constitutional Tribunal ruled that changes made by the government have neutered the country’s highest court. The government said it will ignore the ruling. 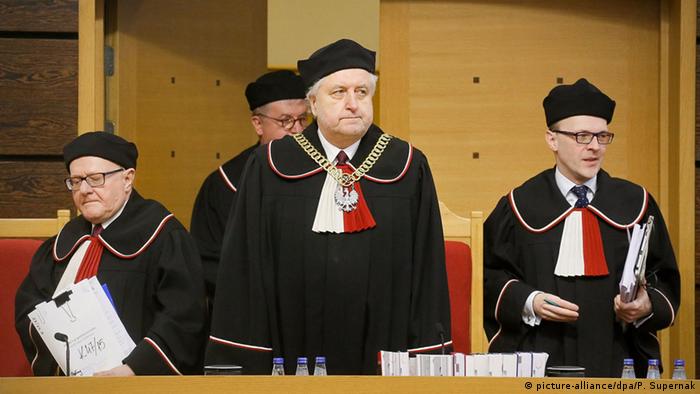 The ruling right-wing Law and Justice (PiS) government, which won a majority at parliamentary elections in October, moved rapidly in late 2015 to amend the law on how the Constitutional Tribunal functions. The court is Poland's highest legislative body ruling on the constitutionality of laws.

A stand-off ensued between the government and an opposition centered around the Committee for the Defense of Democracy (KOD) after the government refused to recognize three judges chosen by the previous government.

Instead, the new government chose its own candidates, who were sworn in by President Andrzej Duda - himself close to PiS - but they have yet to be allowed by the tribunal to take up their positions.

The tribunal's president, Andrzej Rzeplinski, said the constitution gives the tribunal the right to examine the new law, while the government says it cannot because the new law means that the court only has 12 sitting judges and therefore not enough for a quorum.

Twelve judges took part in the sitting that started Tuesday, instead of the 13 specified by the government-initiated amendments. The ruling was - as expected - not backed by two judges sworn in by President Andrzej Duda.

The government's critics claim it is reverting to the confrontational style of politics that characterized the 2005-7 PiS-led administration - the first since the end of communism in 1989 with a parliamentary majority - and that the tribunal is one of the few checks on the government.

"This will likely worsen the Polish government's reputation abroad and increase divisions and tensions within society," Gavin Rae, a sociologist at Kozminski University in Warsaw told DW. 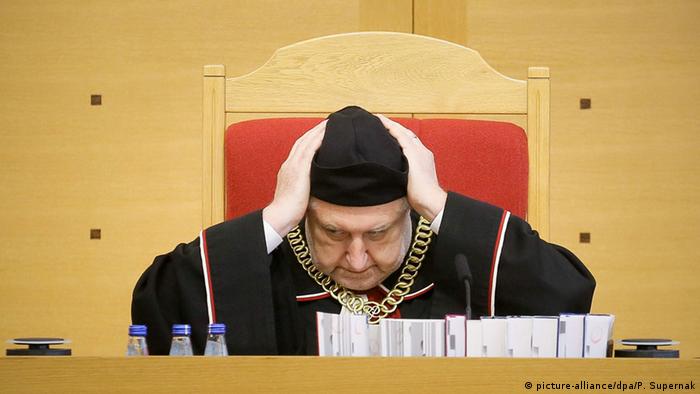 PiS MEP Kazimierz Michal Ujazdowski came up with a compromise solution over the weekend, but negative reactions on both sides indicate that the political standoff has some way to run. Ujazdowski suggested that the three disputed judges elected by the current parliament take their places on the tribunal and as vacancies occur that the three judges chosen by the previous parliament would fill them.

But Prime Minister Beata Szydlo reiterated Monday that her government would not accept the court's ruling. She said the outgoing government of Civic Platform (PO) had politicized the tribunal in June last year as an attempt to impede PiS's legislative program in the event they lost the election. PO MP Rafal Grupinski, meanwhile, dismissed Ujazdowski's idea this week, saying it was an "encouragement to break the constitution."

"For the government to say in advance it will not accept the tribunal's ruling is serious," Nicholas Richardson, a British lawyer practicing in Warsaw, told DW. "By definition, the tribunal is the final arbiter on the constitution and the validity of laws in Poland and for any government simply to ignore its rulings has profound implications for the rule of law and the protection of the citizen from the arbitrary exercise of power by the state." 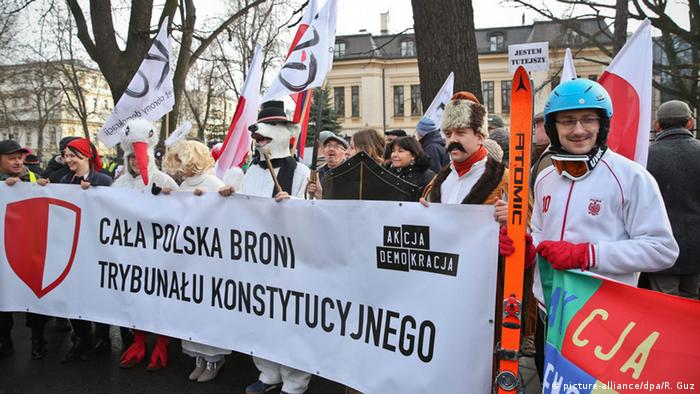 The court's ruling comes amid ongoing international investigations into the state of Polish democracy.

The European Commission is investigating whether the recent reforms of the tribunal are in line with the rule of law. The commission launched its unprecedented "rule of law" probe against Poland in January and will set out its findings on March 11.

The Council of Europe's Venice Commission is also investigating the constitutional reforms; this time at the request of Waszczykowski. It also reports this week.

Jaroslaw Kaczynski, who is the head of PiS and the power behind the scenes in the government, this week attacked the Commission for "compromising" itself after a leaked report criticizing the government's action appeared in the local press over the weekend. "Let no one count on us retreating," Kaczynski said. "We'll work out Polish issues and Polish problems on our own […] We will not be a colony, and don't let anyone expect that the authorities, that PiS, will agree to this status."

"We recall that former president Lech Kaczynski, brother of Jaroslaw, said in 2006 that the judgments of the tribunal are universally binding and that they have to be respected," a KOD spokeswoman told DW.

Although the chances of Poland losing its EU voting rights are small, many feel the conflict will weaken Poland's international position when the country is seeking support to strengthen NATO's troop presence in Central Europe, the main topic of NATO's July summit in Warsaw.

"The tribunal's ruling will probably be taken into consideration by the Venice Commission in preparing its final opinion on Poland and this may have a negative influence on the perception of Poland in the international arena," according to Justyna Jawor, a legal specialist at Polityka Insight, a think tank based in Warsaw.

Opinion polls, meanwhile, suggest that the crisis has hit support for PiS among more moderate and centrist voters. "Up until this point, the government's actions could, with a generous benefit of the doubt, be looked upon as political tit for tat. This declaration by the prime minister - if carried out by the government - does appear to put the government above the law which, putting it mildly, is not a good position for any government to be in," Richardson concludes.

While solutions to the refugee crisis are being pursued intensely in Western Europe, Eastern Europeans remain unimpressed by the tragedy. Bulgarian political scientist Ivan Krastev sees a new divide. (08.03.2016)

The latest in a series of anti-government protests in Poland has brought thousands of people into the streets. But this time they also came out to defend the man who led the pro-democracy movement that toppled communism. (28.02.2016)