Authorities have said finding the stolen sign is an "absolute priority" for the police, who are stepping up border security in their efforts to catch the thieves. 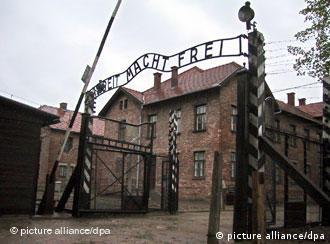 The Auschwitz concentration camp is now a museum and memorial

Polish police say they have tightened security checks at airports and border crossings, and have begun rummaging through scrap metal yards to intensify their search for the stolen sign at Auschwitz.

"This is an absolute priority for the Polish police," said national police spokeswoman Grazyna Puchalska.

The thieves removed the iron sign by unscrewing it on one side of the gate and pulling it off the other side.

Police have said they do not have any leads on the identity of the thieves but they are questioning museum guards and checking security camera footage.

Museum spokesman Jaroslaw Mensfelt said it was the first serious case of theft at Auschwitz.

"This was done by someone who knew what they wanted to do," Mensfelt told Polish news agency PAP. "They had to know how to enter the museum grounds, how to remove the sign and the routes the guards take."

A copy of the sign has now been placed on the entrance gate.

The theft of the historically significant sign caused shock in Poland. Polish Senate Speaker Bogdan Borusewicz told Polish radio that the incident was "deplorable and embarrassing".

"I hope the police recover the sign soon and that it won't have been cut into pieces," Borusewicz said.

Deputy foreign minister Andrzej Kremer told the PAP news agency that he was shocked and said the sign was a "key symbol" of Auschwitz.

Former Polish President and former leader of the communist-era opposition movement Solidarity told Polish television that the theft was "unthinkable" but said he did not believe it was an ideological act.

"It's a criminal act," he said. "It can't be comprehended any other way."

There has also been a strong reaction in Israel to the incident. The head of Jerusalem's Yad Vashem Holocaust memorial, Avner Shalev, called the theft a "declaration of war."

"We don't know the identity of the perpetrators but I assume they are neo-Nazis," Shalev said in a statement.

"I am certain the Polish government will do everything possible to track down those criminals and put them on trial," he added.

The federal and state governments in Germany have agreed to provide half the necessary money to the recently founded Auschwitz-Birkenau Foundation, whose charge is to maintain and preserve the former Nazi death camp. (17.12.2009)

A new Auschwitz Birkenau Foundation has held its first meeting in Warsaw, as Poland moves to raise some 120 million euros for conservation work at the former Nazi death camp. (20.06.2009)