Poland plans to relax rules in fresh amnesty for immigrants | Europe | News and current affairs from around the continent | DW | 05.11.2011

Poland plans to relax rules in fresh amnesty for immigrants

Poland has introduced a new law relaxing conditions under which illegal immigrants can claim residence in the country. The amnesty is set to make it easier for people to obtain residency and work permits. 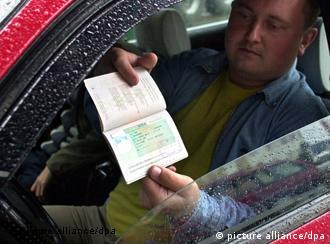 The new law tries to make things easier for immigrants

From January 1, 2012, an amnesty law is due to come into force with the aim of making legal some half million foreigners who are currently living illegally in Poland.

The majority of them come from Belarus or Ukraine, but there are others from Armenia, Chechnya and Vietnam. Meanwhile, Polish immigration authorities have launched an information campaign for foreigners.

Poland first started to have problems with immigration after its entry into the EU in 2004. As part of the EU, the country had become an attractive proposition – especially for people from Belarus and Ukraine, but also for people from places further afield such as Armenia, Chechnya and Vietnam.

Many had at first made an application for asylum in Poland and, instead of leaving when they were turned down, stayed there in the hope of starting a new life.

It is thought that about 500,000 such people are living in the country, with the overwhelming majority of them working illegally.

This amnesty law is the third of its kind aimed at dealing with the problem in Poland, with earlier efforts made in 2003 and 2007. The latest legislation comes into force at the beginning of 2012 and is aimed at making the current official procedure for immigrants considerably easier. Poland should be an open, hospitable and friendly country, Komorowski said

Until now, they have needed to legalize their status only by proving that they had spent 10 years in the country, that they had a work permit and that they were renting an apartment.

According to the new law, immigrants will have to make their application for a temporary or permanent residence permit within six months. In the case that asylum status had been earlier denied to the individual, and officials have ordered their deportation, then that individual would have to prove uninterrupted residence in the country since January 1, 2010. However, those who have left the country even once since that date will not be entitled to the amnesty and consequent legalization.

All migrants that fulfill the criteria will receive a two-year residence permit and the associated work permit that goes with it.

The new law was signed by Polish President Bronislaw Komorowski on August 26, 2011.

"Poland should be an open, hospitable and friendly country for all those looking for the chance of a better life here," Komorowski had said earlier while speaking in favor of a liberal immigration policy in Poland.

In the debate over the so-called amnesty law in the Polish parliament, the Sejm, various political groups had spoken in favor of the law.

"This legalization has emerged primarily from a social need. It is an answer to the repeated demands of non-governmental organizations and parliamentary group," said Danuta Rutkowska, from the ruling center-right, economically liberal Civic Platform party.

"Unlike the previous law from 2003 and 2007, this Amnesty will demand no evidence of a rented apartment or a work certificate. Such a change should eliminate fraud efforts on the part of third parties," said Krystyna Lybacka from the Democratic Left Alliance (SLD).

"Many of those applying for an amnesty are educated people and artists," said Andrzej Sztorc, of the moderate conservative Polish People's Party (PSL).

However, there were some skeptical voices. Piotr Polak of the right wing Law and Justice (PiS) party raised the question during the debate of whether the amnesty might pose risks – for example from terrorism – and whether this was something that the Interior Ministry had taken into account.

According to the Polish Interior Ministry, only about 5,500 immigrants took advantage of the previous two amnesty laws - roughly one percent of those it is aimed at. It is hoped that, this time, things will be different.

The Polish immigration office also hopes that the latest law will appeal to substantially more people. To do that, it has set up a special information line in three foreign languages - English, Russian and Vietnamese - for individuals to obtain information. An information campaign has also been set up, with a website the next tool in line to be used to promote the change.

Coming soon to a ballot near you: the immigrant quota

Non-ethnic Germans are vastly underrepresented in politics. The Social Democrats have announced a quota to bring more minorities into party leadership. Other parties have no intention of following suit. (12.05.2011)