Ever since the original hit screens in 1968, it has raised timeless questions of humanity. Based on Pierre Boulle's post-apocalyptic novel of the same name, "Planet of the Apes" has also proved a commercial success.

The original action and fantasy film adaptation of the novel "La Planète des singes" by French author Pierre Boulle was not only a big budget Hollywood blockbuster, but also raised questions about the meaning of life and fears for the future as it explored the relationship between humans and animals.

Spawning three sequels, 1968's  "Planet of the Apes" was ahead of its time in the way it used special effects (it won an Oscar for best makeup) to create a fantasy sci-fi world that still reflected on contemporary societal foibles.

It dealt with all the big issues of the day, from nuclear war to pacifism and race and gender relations. Though some films — and especially TV remakes — in the franchise divided critics, the fantasy series has endured because it continues to relate to the here and now.

In 1968 media magazine Hollywood Reporter wrote of the original film's wide appeal: "Its relevance to the consuming issues of its time, by the means with which it provides maximum entertainment topped with a sobering prediction of the future of human folly, [makes it] that rare film which will transcend all age and social groupings."

Read more: Are apes the better human beings? The 'Planet of the Apes' saga continues

This is perhaps why the film's final scene — in which the protagonist Taylor (Charlton Heston) rides horseback with the young girl Nova on a beach and comes across the remains of the Statue of Liberty — has gone down in Hollywood folklore (see gallery above). 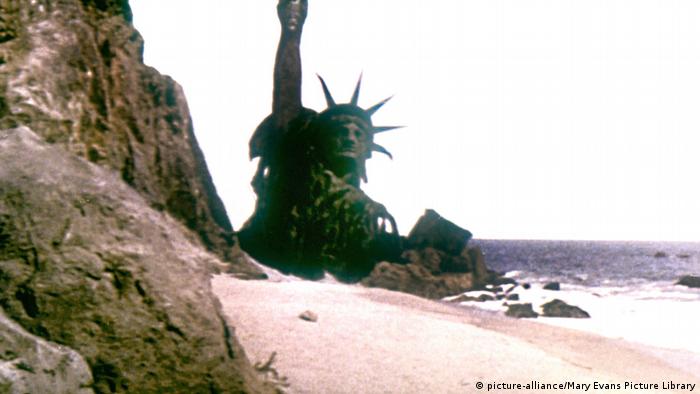 In the face of this human-induced horror, "Planet of the Apes" has asked whether apes might be better than human beings; or, rephrased, whether there are good and evil members of every species.

In the latest film in the franchise, 2017's "War for the Planet of the Apes," the main character Caesar, leader of the Ape Army, continues to grapple with questions of war and peace as he is faced with attack from the oppressive humans.

Ceasar is torn between thoughts of revenge and the desire for peace, between feelings of brutality and tenderness, living out the nuances that have given "The Planet of the Apes" continued relevance for half a century.

19 films from international directors will compete to win the festival's Golden Bear for best film. Berlinale's 68th edition will also address the #MeToo movement and industry gender parity through side events. (06.02.2018)

'Planet of the Apes' at 50: an iconic sci-fi film raises timeless questions

'Planet of the Apes' at 50: timeless questions of humanity continue to be raised by the film and TV franchise — based on the 1964 novel by Pierre Boulle — that sees the simian rise up in a post-apocalyptic world. (08.02.2018)