Plagiarism investigation to proceed against former defense minister | Germany| News and in-depth reporting from Berlin and beyond | DW | 07.03.2011

Prosecutors have deemed that there is enough evidence to proceed with an investigation into plagiarism accusations against former defense minister Karl-Theodor zu Guttenberg. 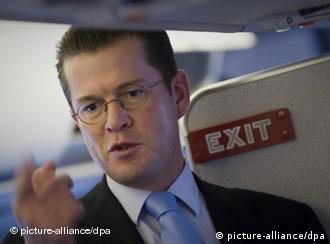 Guttenberg has maintained that he did not plagiarize

Prosecutors in Germany announced on Monday that they were proceeding with an investigation into the plagiarism allegations against former defense minister Karl-Theodor zu Guttenberg.

The team of prosecutors responsible for Guttenberg's case is based in the city of Hof, near the University of Bayreuth where the shamed minister submitted his degree thesis in 2006.

"So far, we have received more than 100 complaints relating to the plagiarism allegations," senior prosecutor Reiner Laib said, adding that the team was looking into possible charges of breach of copyright.

Guttenberg resigned from his post last week amidst uproar over allegations that more than 20 percent of the material in his doctoral thesis was copied from unattributed sources.

Guttenberg's doctoral thesis supervisor, Peter Häberle, and his colleague, Rudolf Streinz, defended themselves on Monday. The "recognition of plagiarism" with the technical means available at that time was "almost impossible," they said in a joint statement.

The two also stressed the intensive relationship of trust between supervisor and doctoral student. They noted that Guttenberg had eloquently defended the thesis in an oral examination.

Guttenberg has acknowledged that the thesis contained errors and has had his degree revoked, but he has denied deliberately misleading his examiners.

German Chancellor Angela Merkel defended Guttenberg throughout the ordeal and still believes there might be hope of a return to politics for him, she told German media last week.

"The doors to politics are not closed to him, as I see it," Merkel told the Stuttgarter Nachrichten newspaper on Friday, saying Guttenberg "could have continued to be a good minister."