Pilsen shows off hidden secrets as Capital of Culture

Pilsner Urquell and Skoda are its most famous trademarks. It made Lonely Planet's list of 10 places to check out in Europe last year. And now Pilsen is a European Capital of Culture. What makes the Czech city so special?

With a cultural program including over 600 activities and 50 major events, the Czech city of Pilsen will definitely have a lot more to offer than its world-famous beer this year. It shares the title of European Capital of Culture 2015 with Mons, in Belgium.

When the Pilsen Philharmonic Orchestra plays the "Symphony of bells" to launch the European Capital of Culture program on January 17, three very loud guests will be contributing to the climax of the piece. Johannes Nepomuk, Maria and Hroznata - the names of St. Bartholomew's Cathedral new bells - will ring for the first time.

The public donated over 10 million Czech crowns (nearly $420,000) to replace the bells melted down by the Nazis over 70 years ago, adding to the symbolism of the event.

This opening event illustrates well why Pilsen was chosen to highlight Europe's culture: The project aims to provide fresh impulse to a European city already filled with tradition and creative potential. Two cities are selected for the honor each year.

Although the Czech Republic is reputedly one of the most secular countries in Europe, defunct and endangered churches testify to the fact this was not always the case. A series of concerts called "Nine weeks of Baroque" as well as art installations and exhibitions will revitalize these cultural monuments. 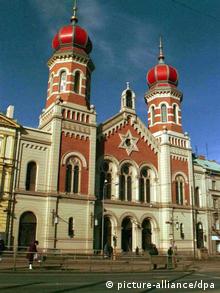 Pilsen once had a rich tradition of Jewish culture

The Great Synagogue, the second largest in Europe, is a reminder of the better days of Pilsen's Jewish community, which used to be 2,000 members strong at the time of its establishment at the end of the 19th century.

The city's cultural life suffered greatly from the decimation of its Jewish population during the Holocaust. This loss and other tragic aspects of the Second World War will be commemorated during the Liberation Festival in May, marking 70 years since the end of the conflict.

Like the extensive network of secret 14th-century tunnels covering over 10 kilometers (over 6 miles) underneath the city, some of Pilsen's most interesting architectural gems are actually hidden. This inspired the creation of an interactive map called "The Hidden City," which reveals hundreds of stories attached to specific locations.

The interiors created and furnished by the influential architect Aldolf Loos (1870-1933) will also be highlighted this year through guided tours.

"He was a pioneer of modern architecture in the first half of the 20th century," explains promoter Magdalena Soukupova, "Yet it is fast unknown that it is here in Pilsen that most of his works are found, second to Vienna."

Something old, something new

Disused factories are being transformed into creative venues. One of brewer Pilsner Urquell's old power stations will host an exhibition of European design. Former Škoda car factory halls are now the campus of the Techmania Science Center and the 3D Planetarium which opened last year.

A new arts space, the Josef Kajetán Tyl Theater, is the first major theater built in the Czech Republic since the collapse of communism. The project "Le Cirque Nouveau" will bring together some of the world's leading modern circus groups.

For this edition of Pilsen's traditional Puppet Theater Biennale, three dozen foreign productions are expected to take the stages.

The colorful bunch of international artists befit the motto chosen for the year: "Pilsen, open up!" Jiri Suchanek, the director of the program, hopes visitors will discover the variety Pilsen has to offer: "We want to go beyond the stereotypes and open up the city in a completely different way."

Destination Germany: Why you should come in 2015

Germany is becoming increasingly popular with tourists from abroad, with art and music events topping their reasons to come. Here's why you should also consider a trip to Germany in 2015. (06.01.2015)

The Scorpions, Scooter and Mozart helped win three German locations the title of UNESCO Creative Cities. They're among a collection of international cities recognized for their cultural legacies. (01.12.2014)

In Prague, thousands celebrated the Velvet Revolution's 25th anniversary. The festivities also turned into an appeal for Czech President Zeman to resign. An egg thrown at Zeman hit Germany's president instead. (17.11.2014)