He's portrayed Obama, Putin and Snowden and shot the most impactful photograph of the 2008 US presidential election campaign. Photographer Platon tells DW how he helps us focus in our modern era of distractions. 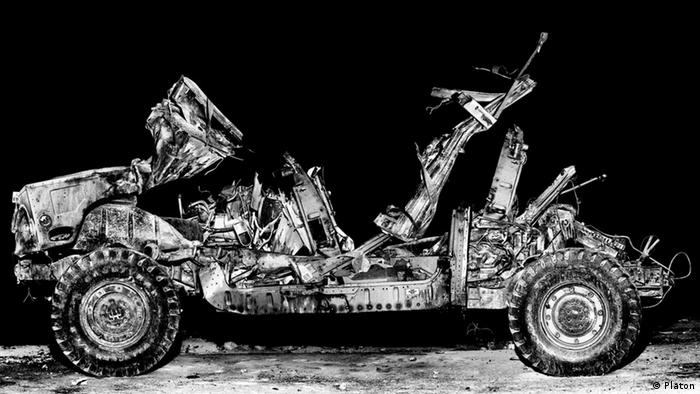 The British-born photographer Platon has captured some of the most influential people of our time, from politicians Barack Obama and Vladimir Putin to the boy band One Direction and whistleblower Edward Snowden. In 2008, tasked by the "New Yorker" magazine to produce a 20-page photo essay dedicated to the topic of service," Platon employed the same minimalist techniques he has used in portraiture as he turned his lens on ordinary people whose lives had been affected by the US military presence in Iraq and Afghanistan. Though he'd chosen not to embed as a war photographer on the battlefronts, Platon captured the war like no other photographer had.

With recent events in Iraq and the US beginning a new election campaign, the photo series take on a whole new urgency, imploring viewers to consider the individuals affected by foreign policy decisions. Several images from the series are currently on display in Cologne at the minimalist Böhm Chapel. DW's Courtney Tenz met Platon at the show's opening.

DW: You've been best known for your portraits of world leaders. What inspired you to shoot ordinary people back in 2008?

Platon: When I was given this assignment, I was given access that no other journalist had. They allowed me into this tactical training facility made up to look like a fake Iraqi Village called Medina Wasl, at Fort Irwin, California. I slept on the streets there to take pictures of the training the soldiers went through right before their deployment. I was onboard the USS San Antonio with those sailors right before they set sail.

With this essay for the "New Yorker," we consciously wanted people to talk about service, and the responsibility of sending people into conflict and the damage that can be done. Barack Obama at the time was talking about pulling troops away from Iraq and Afghanistan, and John McCain was talking about sending more troops in and it was a very big debate. Obviously, we needed to remind people that war is brutal. But there are also different messages. These are the human stories that I found.

Even though I consciously avoided politics in this project - I'd had enough of politics - this series ended up getting deeply involved in politics and helped shape the political landscape. One of my pictures was voted the most important photograph of the election campaign. It wasn't of Obama, whom I had photographed, or of McCain, whom I had also photographed. It wasn't of anybody important or any celebrities or powerful people. It was this one: "Elshaba Kahn at the grave of her son, Specialist Kareem Rashad Sultan Khan, in Section 60 of Arlington National Cemetery." A picture of an ordinary person, like any of us, who has no authority whatsoever, but she's dealing with something that many politicians don't - and that's being authentic and dealing with loss of life in the most dignified and noble way. And it was that authenticity and dignity that actually captured people. 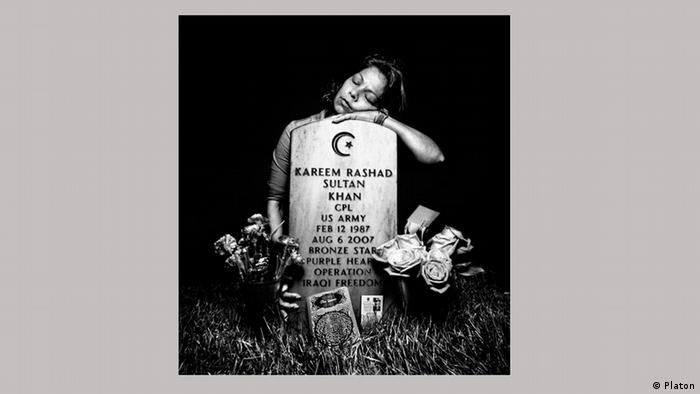 How did you come to take that image?

I went to Arlington National Cemetery, where all of the soldiers who had been killed during war are buried and I photographed many families there who were grieving their sons and daughters. I saw this lady at the other end of the cemetery. I wasn't planning to photograph her. Someone told me that she's there every day. She brings a folding chair that she sets up and she has this book and every day, she reads this book to his spirit. I went over to her and I watched her and it was beautiful. I asked her if she'd allow me to take her picture and she graciously agreed and she gets behind the gravestone and cuddles it as if it's her son and she put the book she reads on the ground.

I was very moved by this woman, with this human side of dealing with grief in a very dignified way. And I was so moved that I didn't even look at the book that she reads to him. I didn't even look at the writing on the gravestone to see that it was a Muslim name. I was consciously more concerned with the human side. Only when I took it back to the "New Yorker," and we were laying out the story, only then did we notice what's written on the gravestone and what the book is.

In the image, the background is blacked out and the Koran is highlighted.

My father was a modern architect; Mies van der Rohe and the Bauhaus have deeply shaped how I function. The idea of modernism is to respect the materials and be truthful and to reduce. If something is made of concrete, you show it's made of concrete. What's left is essential. When it comes to my pictures, most of the time I try to simplify it so that you look where I want you to look. 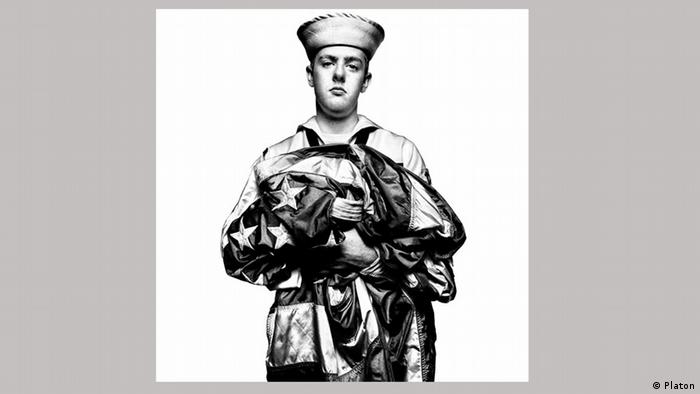 The most important thing is her gesture. I'm always trying to simplify and trying to direct your attention at a time when we're all suffering from attention deficit disorder and it's very important that we are helped to slow down. To stop. To have a moment of almost meditative focus and see something as a clear and concise statement.

The image went on to be considered the most influential of the election. Why?

About a week after we published it - about two weeks before Election Day - General Colin Powell went on the news. He made an historic announcement and said, "I'm no longer endorsing my fellow Republican. I'm changing sides. I'm now supporting Barack Obama." When the TV moderator asked him why, he said, "A photograph changed my mind." This photograph had changed his mind. And his endorsement was huge. It could swing the vote.

And yet you're showing the photograph again now, seven years later, when the US troops have left Iraq.

What I discovered while shooting this is that it wasn't war. It wasn't the glory of war. It wasn't the politics of the wars in Iraq and Afghanistan. The story was the grieving wife, widow, devastated. It was a reminder of what is important in life: humanity, respect, openness in society. Respecting people's religions, their ideology. Valuing love. Valuing relationships. Realizing how special they are and how fleeting the opportunity is to have someone around you that you love. I've seen love lost and I've seen what it does to people. And seeing that adds incredible value to the love that we have now. As an ordinary citizen in society, my job is to remind people how important love is and respect and dignity and compassion.

Five images from the "Service" series are on display now through September 22, 2015 at Böhm Chapel, in Hürth, Germany.

It is a key reference for all off-beat explorers with a passion for rust and flaking paint, set to a historical backdrop. Now "Abandoned Berlin," one of the city's most popular blogs, has been released in print. (27.02.2015)

Paint and canvas were hardly enough. German and French artists struggled to capture the Great War's brutality. Many of their works have gained fame, and are part of an exhibition underlining the countries' friendship. (09.04.2014)