Prostitution on the archipelago is illegal. Still, there are about 800,000 prostitutes living and working in the Philippines. Half of them are underage. 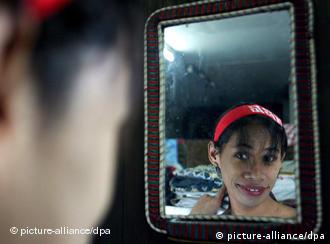 The patriarchal traditions of Philippine society make life difficult for women. Not only do women there face an uphill battle against society, they are often victims of violence or sexual abuse within their own four walls.

Women earn half as much as men do at work. In poorer families, girls are often forced to give up their education in favor of their brothers. Uneducated women can easily become victims of violence. It becomes a vicious circle.

Poverty is in fact the main reason why many girls go to the city looking for work. Often they slide into prostitution. In Davao, the Philippines' largest city, girls and women ply their trade day and night on Carpenter Street. They are struggling for survival.

Davao's infamous red light district is home to girls as young as 13. But with their gaudy make-up and high heels, these very young women do not seem to have much of the child left in them.

Another means of earning money is offered by the Japanese market. "Japayuki" - or one who has "gone in the direction of Japan" - is the local name given to girls who dance in bars in Japan. 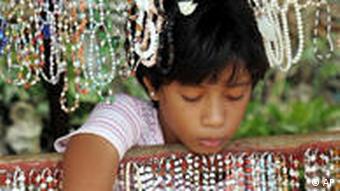 Sometimes they don't only dance, but prostitute themselves, as well.

With an "entertainer" contract abroad, the girls are seen as heroines back home. After all, the sex trade is lucrative and feeds the families.

Authorities often choose to turn a blind eye to the situation, as they get their share of the sex trade, as well. They make a huge profit selling licenses to sex club owners and equally hefty revenue on taxes.

The Philippine sex industry is the fourth largest contributor to the country's gross national product. Manila also earns huge amounts of money from the "Japayuki." The girls send more than 100 million euros ($150 million) home every year. It's a huge sum for a country whose foreign debt is constantly rising. Prostitution may therefore be illegal, but it is accepted.

In the last 15 years, the Philippine government has passed a great many laws to protect the rights of women and children. There are also many non-governmental organizations that have been set up to help women and children. But the Philippines have a long way to go before the concept of equality will be accepted in more than just paper legislation.

Listen to a coproduction on women in the Philippines