Philippines targets Oxfam, other rights groups, as ′communist fronts′ | Asia | An in-depth look at news from across the continent | DW | 29.11.2019 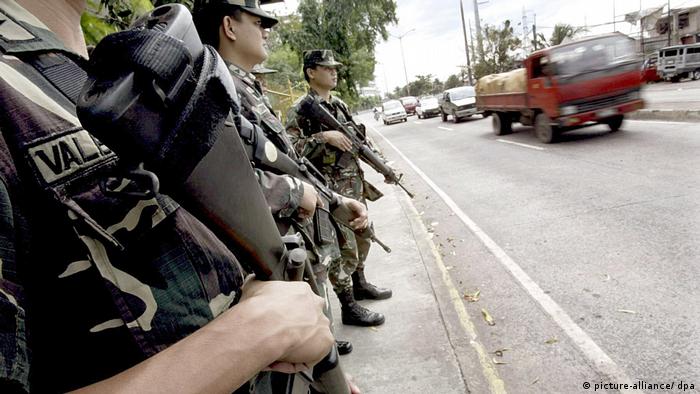 International humanitarian organizations are the latest to be targeted by the Philippine government as anti-state outfits, say activists.

Earlier this month, the country's Department of National Defense released a list of organizations that are allegedly acting as a front for local "communist terrorist groups.” Oxfam, a UK-based non-governmental organization, is one of the organizations on the list.

Oxfam denied the government allegations in a statement. "We are a development and humanitarian organization, not a 'front for local communist terror groups,'" it said.

Why 'red-tagging' is dangerous

Activists say that "red-tagging" is part of a government crackdown on rights defenders.

A 2007 report by Philip Alston, then United Nations special rapporteur on extrajudicial, summary or arbitrary Executions, revealed an "appallingly high number of political killings in the Philippines." The report also shed light on the "omnipresent" role of the security forces in targeting activists and a prevalent culture of impunity.

Human rights lawyer Krissy Conti told DW that there are similarities between the extrajudicial killings outlined in the Alston report and the current situation in the Philippines.

"There is a similar pattern. First, they vilify opponents by 'red-tagging' them. Then follows extrajudicial killings," said Conti, a member of the National Union of People's Lawyers (NUPL), which is a nationwide association of human rights lawyers working closely with grassroots organizations and minority groups.

"The crackdown is widespread; it is targeting anyone who shows dissent," Conti said.

"We have seen the Duterte administration's capacity for violence. The red-tagging is meant to scare, sideline and silence anyone associated with the opposition," Conti added.

The government denied claims of harassment by human rights groups.

"No one is above the law. Claiming that they are legitimate organizations does not make them exempt from legal processes," said Brigadier General Edgard Arevalo, a spokesperson for the armed forces of the Philippines.

The government also defended its counter-insurgency initiatives under the "whole of nation" approach that was recently approved by the president.

"Under the approach, local government units and members of the community will take the lead in providing solutions to finally put an end to the decades-long communist rebellion in the country," reads a part of the executive order.

She also criticized the government's "whole of nation" approach, saying it institutionalized actions against legitimate dissent in the garb of counter-terrorism measures.

"This is part of the Duterte government's scheme to obliterate democratic space that has been protected by grassroots advocacy groups," Concepcion underlined.

Years of plummeting immunization rates, compounded by a vaccine scare and an insufficient healthcare infrastructure, are causing a public health crisis in the Philippines. Ana P. Santos reports from Manila. (01.11.2019)