Philippines struggling to cope with back-to-back disease outbreaks | Asia | An in-depth look at news from across the continent | DW | 01.11.2019

Years of plummeting immunization rates, compounded by a vaccine scare and an insufficient healthcare infrastructure, are causing a public health crisis in the Philippines. Ana P. Santos reports from Manila. 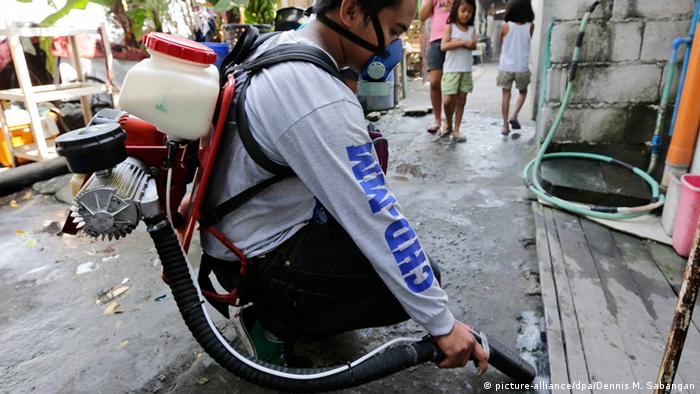 The Philippines is grappling with a public health crisis as back-to-back disease outbreaks of measles, dengue and polio have gripped the country since the start of the year.

There have been more than 42,000 reported cases of measles and 560 deaths since the Department of Health (DOH) declared a measles outbreak in February last year. However, reports from the last month show the number of measles cases and their fatality rate are falling.

In August, the DOH declared a dengue epidemic. Since then, over 350,000 cases of dengue and more than 1,300 related deaths have been reported. It is the worst dengue epidemic the country has seen in a decade.

The following month, the DOH confirmed the re-emergence of polio 19 years after its eradication. A third case of polio was confirmed this week. The health department has launched campaigns to bolster polio immunization, including a move to inoculate millions of children under the age of five in several parts of the country.

Kristine, a mother of three young children, is anxious about the back-to-back disease outbreaks in the country. Her youngest child, who is now 11-months old, could not get vaccinated when the measles disease broke out. The most she could do to protect her was to keep her inside the home and limit her exposure to others.

"I felt that the public health system was letting us down, as preventable diseases like measles and polio are coming back," Kristine told DW.

"I know that the DOH is doing its best to convince parents to inoculate their children, but the executive branch needs to put more voice into this. They're good at swaying public opinion, so why don't they use their mouthpiece for this?" Kristine added.

In Pasig, which is situated in the east of Manila, the rising numbers of dengue cases and the death of a seven-year-old student caused panic.

When Stanley Fernandez's 8-year-old son caught dengue, he became paranoid. Fernandez told DW that he and other parents are frustrated over the schools' inadequate response to prevent the disease by cleaning mosquito breeding areas.

Fernandez said he would feel less anxious if the dengue vaccine were made available again. "It's difficult to protect children from dengue. There is no other way, but vaccination," he said.

Experts say that the outbreak of preventable diseases is a result of falling immunization rates and growing anti-vaccine sentiments.

"We have seen that the vaccination rate is decreasing globally; it is not specific to the Philippines," Rabindra Abeyasinghe, acting representative of the World Health Organization (WHO) in the Philippines, told DW.

"Vaccines successfully eradicated many preventable diseases and it gave parents and caregivers a false sense of security," said Abeyasinghe. "This outbreak is a wake-up call for everyone to address the deficiencies in the public health system," the WHO official added.

There are signs of improvement though. During the first phase of the mass immunization roll out for polio in October 2018, parents welcomed the health workers that administered polio vaccination.

Wijdan Madani, the chief of health and nutrition for the United Nations Population Fund, said that achieving 95% immunity is their most immediate priority, along with investing in hygiene and sanitation.

That may prove to be difficult as the health department's budget is set to be cut by 10 billion pesos (€176 million, $196.5 million) next year. Health Secretary Francisco Duque III said the department is still in talks with the budget department and that nothing is final.

"It is important to take action now. If we don't curb this outbreak, we can expect outbreaks like these to happen every 3 to 4 years," said Madani.