Philippine President Rodrigo Duterte has reversed his decision to annul a major defense pact with the United States. The move follows the visit of US Defense Secretary Llyod Austin. 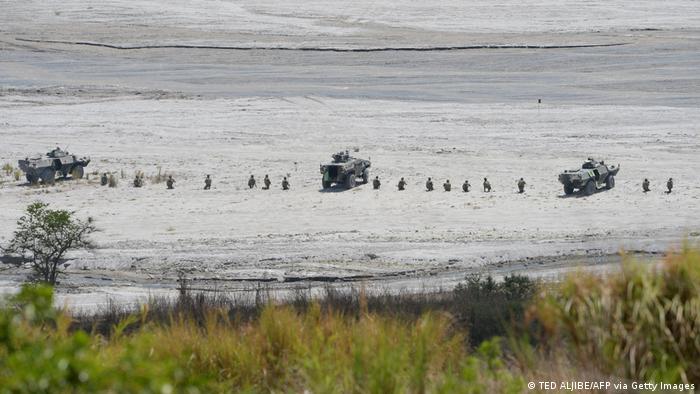 Philippine President Rodrigo Duterte has restored a key defense pact with the United States that governs the presence of US soldiers in the Southeast Asian nation, reversing a decision that had caused concern in Washington and Manila.

Defense Secretary Delfin Lorenzana announced Duterte's decision in Manila on Friday during a joint press conference with his visiting US counterpart, Lloyd Austin.

The Visiting Forces Agreement (VFA) provides protocols for the rotation of thousands of US soldiers for combat exercises and drills.

What could have prompted the reversal?

The pact has gained additional importance in recent years for the US and its allies, with China trying to assert itself in the region.

There are persistent tensions between the Philippines and China over disputed waters in the South China Sea.

Philippines has to stand up for itself before others can, says analyst Richard Heydarian

In February 2020, Duterte said he was canceling the VFA after the US denied a visa to a Philippine senator allied with the president, but had extended it until December.

Lorenzna said he was unsure why Duterte had reversed his decision to abrogate the pact, but it happened after the president met with the US defense secretary on Thursday.

"The president decided to recall or retract the termination letter for the VFA,'' Lorenzana said. "We are back on track.''

Austin welcomed the restoration of the VFA, which he said would help boost defense relations between the longtime allies.