Philippine youth losing faith in political system | Asia | An in-depth look at news from across the continent | DW | 21.05.2019

Philippine youth, who make up more than half of their country's population, are generally anti-establishment. Their failure to make an impact on the mid-term polls raises many questions about the future of the country. 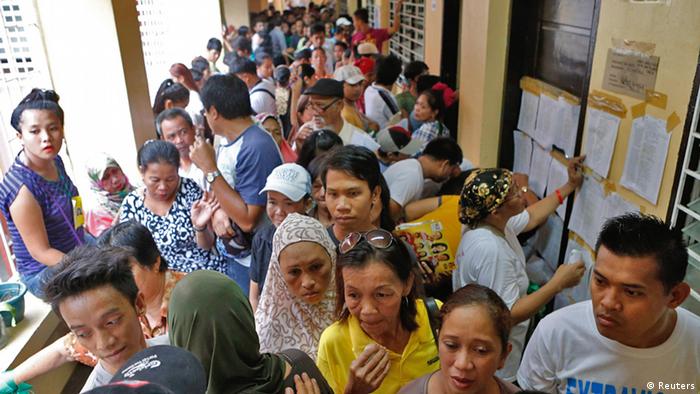 Bernise Tan, an 18-year-old college student, was casting her vote for the first time, and she wanted to make an informed opinion about all candidates. She researched about the backgrounds and manifestos of all candidates. She wanted to know whether the candidates supported issues that were important for her, such as LGBT rights and climate change.

But the results of the elections were disheartening for Tan. Candidates supported by Philippine President Rodrigo Duterte won most of the seats in a key midterm senatorial election, according to unofficial results released on May 14. Duterte allies were on track to take nine of 12 open seats in the country's upper house.

None of the opposition candidates Tan had voted for managed to win a single senatorial seat. Instead, a former dictator's daughter, a former senator charged in a corruption case and a police chief involved in President Duterte's brutal drug war were among the winning candidates.

"These are the people who will wield power. They're likely to protect the interests of the Duterte administration," Tan told DW.

The midterm election was billed as a referendum on Duterte's popularity. Analysts say that the victory of his allies will consolidate the firebrand president's grip on power and allow him to pass controversial laws through parliament.

According to the Southeast Asian country's election commission, Filipinos born after the 1980s make up over half of the more than 60 million registered voters. That is why some analysts had hoped that the youth vote could be decisive against Duterte in the midterm polls.

Vincent Cano feels disillusioned. "I think it doesn't matter who I vote for because candidates backed by the administration always win. The government won't do anything for me; I can only depend on myself," said the 20-year-old student.

Leloy Claudio, an associate professor at De La Salle University in Manila, told DW that the youth vote did not make an impact at the national level. The situation was somewhat different at the local level, as some candidates supported by powerful political clans were toppled by their younger counterparts. It is, however, unclear whether the youth vote was responsible for this change.

"Overall, the electorate voted overwhelmingly for pro-administration candidates," Claudio said. "Political 'brands,' or political dynasties, may not appeal to the youth, but they are still powerful in the country," he added.

But some political observers say that the election was rigged in the administration's favor. Last Friday, thousands of protestors rallied in the capital Manila to protest the May 13 vote. They accused the Duterte administration of election fraud.

Vic Crisostomo, a representative of the Kabataan (Youth) Partylist, told DW that they have received numerous reports of fraud, intimidation and harassment during the election.

"The rigging is obvious," Crisostomo said.

Joshua, who lives outside of Manila, told DW that days before the election, people were invited to a pro-administration meeting and were "encouraged" to vote for certain candidates in exchange for money.

"To be honest, I don't even remember who I voted for. It was like taking an exam unprepared. But my vote would not have made any difference. All these politicians are the same," said the 21-year-old citizen.