The Philippines' most active volcano has ejected a huge cloud of ash and smoke, prompting fears of imminent eruption. Mount Mayon has already forced some 27,000 nearby villagers to evacuate.

Philippine authorities raised the alert level around its most active volcano Mount Mayon on Monday, after it started emitting plumes of grey smoke and ash.

"Alert level 4 was raised over Mayon Volcano," the Philippine Red Cross tweeted. "This means extension of danger zone to 8 kilometers (5 miles) or more is recommended in the sector where the crater rim is low. The public is advised to wear protective masks and continue to be safe and vigilant."

Alert level 4 on the five-level alert scale means that a "hazardous eruption is possible within days," according to the Philippine Institute of Volcanology and Seismology (Phivolcs).

Mount Mayon is located in the Albay province, some 330 kilometers south from the Filipino capital of Manila. 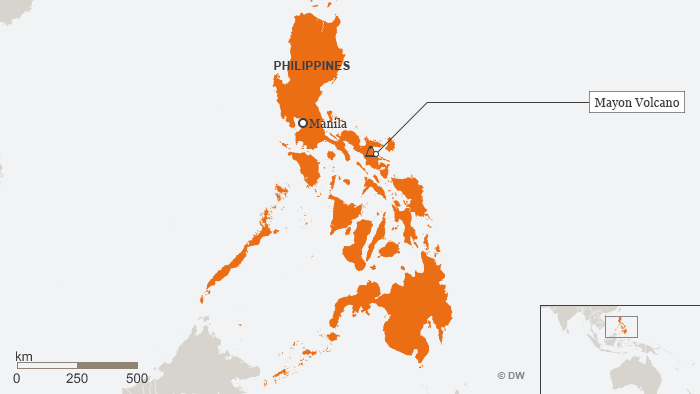 Images uploaded to social media showed the ash cloud reaching far above the volcano's crater, with Phivolcs estimating the cloud to be around 10 kilometers high. Fine ash and sand began falling on the nearby city Legazpi, home to some 200,000 people.

More than 27,000 nearby villagers have fled the area since Mayon started rumbling more than a week ago.

"There is a possibility of a dangerous eruption, the start of which we are already witnessing," said Phivolcs official Renato Solidum. "If the eruption is vertical, it's possible pyroclastic flows or pyroclastic density currents may cascade down in all directions."

Mount Mayon is a popular destination for tourists and climbers, given its near-perfect cone-shape. However, it has erupted around 50 times in the last 500 years.

In 2013, five climbers were killed by an eruption of ash after ignoring warnings not to attempt an ascent.

The most destructive eruption happened in 1814, when 1,200 people were killed and the town of Cagsawa was buried in volcanic mud.

More recently, in 1991, the eruption of Mount Pinatubo, some 100 kilometers northwest of Manila, left more than 800 people dead.

The Philippines is part of the so-called "Ring of Fire" in the Pacific Ocean, where volcanic activity and earthquakes remain common.

Saudi Arabia rejects US report on Khashoggi's murder 3h ago