Some 10,000 have taken to the streets of Manila to protest President Rodrigo Duterte's bloody anti-drugs campaign. More than 7,000 people have been killed since Duterte vowed to wipe out drug dealers and users. 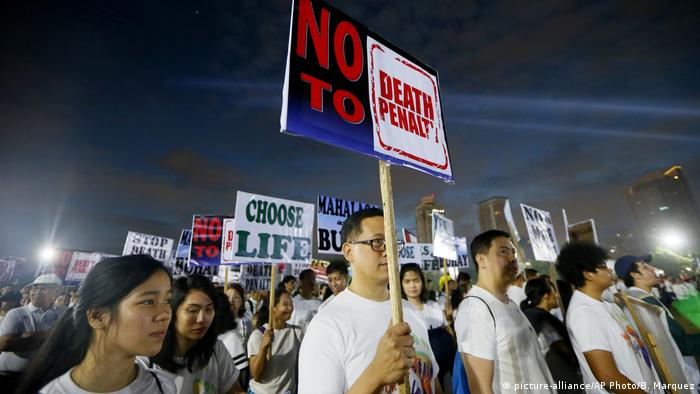 Thousands of demonstrators marched alongside Catholic Church leaders in the Philippines capital of Manila on Saturday to protest President Rodrigo Duterte's deadly war on drugs and attempts to reinstate the death penalty.

According to police estimates, at least 10,000 people joined the "Walk for Life" march, making it the largest rally yet against Duterte's brutal crackdown against drug dealers and users. It also marked the largest show of opposition from the Roman Catholic Church against the government's anti-drugs campaign, which has seen more than 7,600 mostly poor people killed in the past seven months.

"We have to stand up. Somehow this is already a show of force by the faithful that they don't like these extrajudicial killings," Manila bishop Broderick Pabillo said. "I am alarmed and angry at what's happening because this is something that is regressive. It does not show our humanity."

The Catholic Church is one of the Philippines oldest and most influential institutions in a country where about 80 percent of the population identifies as Catholic, a legacy of the country's time as a Spanish colony.

Duterte on a collision course with Catholic Church

As one of the nation's most powerful institutions, the Catholic Church has in the past played a crucial political role in the Philippines. In 1986, it helped lead a revolution that toppled dictator Ferdinand Marcos. Then, in 2001, it supported an uprising against then- president Joseph Estrada before he was subsequently ousted over corruption charges. 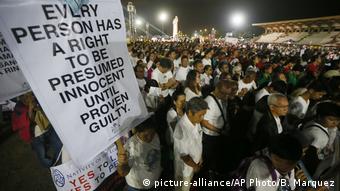 Protesters have accused Duterte of carrying out extra-judicial killings, claims the government denies.

The Church initially refused to voice its opposition to Duterte's anti-drugs campaign but its opposition has grown increasingly vocal since the end of last year, with the number of casualties continuing to rise.

"It is obvious that there is a spreading culture of violence. It is saddening to see, sometimes it drives me to tears how violent words seem so natural and ordinary," the country's highest-ranking Church official, Manila Cardinal Luis Tagle, said. "In your surroundings, in your neighborhood, there are so many lives that must be saved. They will not be saved by mere discussion."

Duterte was elected president in May on the back of a strong anti-crime and anti-drug platform, claiming he would save generations of Filipinos from the drug menace. Since being elected to office, he has often attacked the church, once describing it as "the most hypocritical institution" for speaking out against his campaign. The President has also scolded a number of local bishops, accusing them of corruption and sexual abuse.

Duterte has also asked Congress to revive the death penalty by public hanging, which has also put him on a collision course with the Church. "Execution is murder," Archbishop Socrates Villegas, who heads the country's bishops, said. "We cannot teach that killing is wrong by killing those who kill."