Facing allegations of rape, dissident artist Pyotr Pavlensky has fled his native Russia and is seeking political asylum in France. Pavlensky's previous performances have led to run-ins with the law. 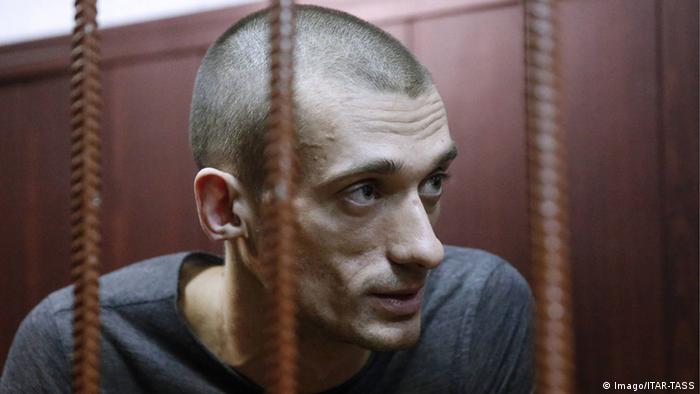 Controversial performance artist Pyotr Pavlensky has fled Russia and says he is seeking political asylum in France after being questioned by authorities on allegations of committing a sex crime.

Pavlensky made headlines in recent years due to protests he has staged as performance art, including sewing his lips shut in support of the then-jailed members of the band "Pussy Riot," setting the wooden door of the Federal Security Service (FSB), one of the successor organizations to the Soviet-era KGB, alight and nailing his scrotum to the pavement in Moscow's Red Square. His actions are intended to draw attention to his opposition to laws that he has deemed oppressive. 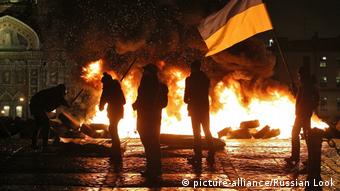 Pavlensky's 'Freedom' was dedicated to Euromaidan activists in Kyiv

Pavlensky fled with his partner Oksana Shalygina and their two young children in December after they were detained upon returning to Moscow's Sheremetyevo airport.

They were questioned by state investigators for several hours and later learned this was in relation to allegations that a sex crime had been committed against an actress.

While they do not know if a criminal case has been officially opened against them, the couple felt it was too risky to remain in Russia and fled to Ukraine in mid-December.

In his first interview since leaving Russia, Pavlensky said Monday that he believes he was entrapped, likening it to the denunciations that led to mass imprisonment in the repressive Soviet era. 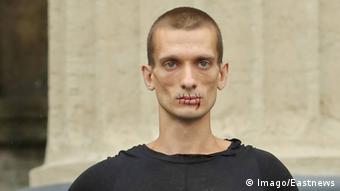 "I wouldn't say I was a threat, more a big inconvenience, because lots of money and resources are spent on propaganda ... then I carry out some action and it's a strike on the propaganda machine," he said.

While Russia's Interior Ministry and its Investigative Committee did not reply to requests for comment from Reuters on Monday, several friends of the actress who has made the allegations have voiced support for her.

A Russian court has slapped a fine on a radical artist for torching the doors of the country's security service headquarters last November. Pyotr Pavlensky said the trial showed the state is based on "terror." (08.06.2016)

Russia's cultural landscape sees increasing state intervention with little to no leeway to escape a passive sense of censorship. While some dissidents fight for their freedom, many resign to living by this new reality. (02.01.2016)

Russian artist and activist Pyotr Pavlensky has been arrested after setting fire to a door of the headquarters of Russia's domestic intelligence service in Moscow. He accused the FSB of "unending terror." (09.11.2015)