A German scientist was awarded an Ig Nobel prize for discovering that holding a pen in your mouth does not bring joy. Other winners proved that one testicle is warmer than the other and that banknotes spread disease. 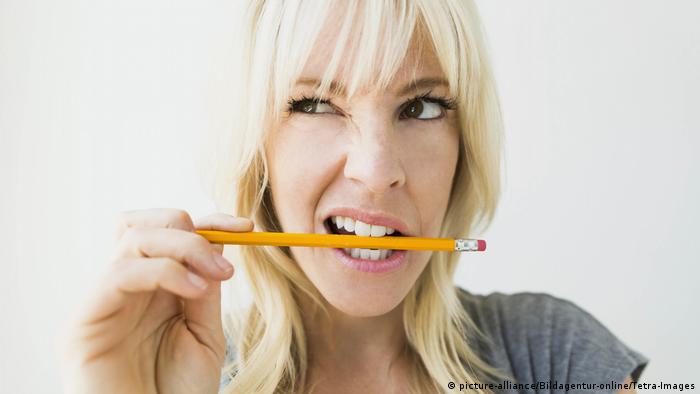 A German scientist was among those honored with a spoof Nobel prize in the awards ceremony which took place at Harvard University on Thursday.

The winners of the annual prizes include Dutch researchers who discovered which currency has the dirtiest banknotes, Japanese scientists who demonstrated how much saliva a typical 5-year-old produces and a group from Italy who proved — scientifically — the health benefits of pizza made in Italy.

The award ceremony, now in its 29th year, comes a month in advance of their more well-known namesake, the Nobel Prize ceremony in Stockholm. The Ig Nobel prizes were created to honor work that "first makes people laugh, and then makes them think." It also aims to draw attention to some of the year's most trivial or unusual findings in science.

Germany's contribution to proceedings came from Fritz Strack of the University of Würzburg in the psychology category, who after extensive research "discovered that holding a pen in one's mouth makes one smile, which makes one happier — and for then discovering that it does not."

Strack has already received positive feedback from fellow scientists for his "replication research" on Twitter.

Meanwhile, the award for anatomy was bestowed upon French scientists who discovered that in most men one testicle has a higher temperature than the other, but only when the subject is wearing clothes. The scientists conducted their study on French postmen.

According to their research, the left testicle is almost always the warmer one. To this end, the fertility scientists have invented a device to heat up underwear as an aid to contraception.

Dutch researchers who looked into bacteria on paper money concluded that the Romanian leu is the banknote that could spread infection most easily. When asked about how to counter the problem of spreading germs through paper money, Andreas Voss advised people to "use plastic and electronic payment."

During the ceremony each winner has sixty seconds to give a speech before being interrupted by an 8-year-old girl whining "Please stop, I'm bored." Prize money comes in the form of $10 trillion in cash — but handed out in near-worthless, inflation-destroyed Zimbabwean dollars.

Marc Abrahams, the ceremony's host, concluded the evening as he does every year: "If you didn't win an Ig Nobel Prize tonight — and especially if you did — better luck next year."

It's scientific fact: You are better off eating a bison or a horse than a human — nutritionally speaking. The strange yet interesting findings were recognized by this year's Ig Nobel Prize for nutrition. (20.09.2018)

Research that makes you think and laugh

The magazine "Anals of Improbable Research" held its annual award-ceremony for the Ig-Nobel-Prize for serious research with a humorous touch. Here are some recent winners. (18.09.2015)