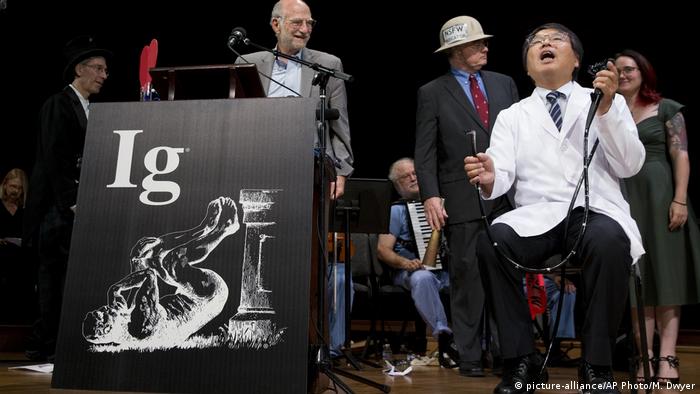 The comfort of a home colonoscopy, the benefits of taking out anger aimed at a boss on a voodoo doll and cannibalism's lack of nutritional benefits were all scientific discoveries that received Ig Nobel Prizes on Thursday in a laughter and music-filled ceremony at Harvard University.

The annual prize series honors 10 comical but practical scientific studies "that first make people laugh, and then make them think." The prize is run by Annals of Improbable Research (AIR), an international scientific humor magazine that satirizes traditional academic journals, and seeks to raise public attention about science.

The event was broadcast live on YouTube and will later air on American National Public Radio.

The recipients of the 2018 Ig Nobel Prize came to Cambridge, Massachusetts, from all over the world — at their own expense — to be honored for the research in a quirky ceremony. They also received a worthless cash prize of 10 trillion Zimbabwean dollars.

Among the awardees on Thursday night was Lindie Liang, a Canadian business professor studying workplace aggression, who took home the economic prize. She determined that allowing workers to take out aggression at their boss through a virtual voodoo doll led to the workers feeling better because "their injustice perceptions are deactivated."

James Cole, a British archaeology lecturer, determined that despite the accepted perception behind human cannibalism, human flesh is not actually calorie-dense.

"We're not super nutritious," the recipient of the nutrition prize said.

Dr. Akira Horiuchi, a Japanese pediatrician, was honored with the medical education prize for his at-home, seated self-colonoscopy procedure, while a group of Spanish traffic researchers took home an Ig for measuring the frequency, motivation and effects of shouting and cursing while driving. The team, which found that one in four drivers yells or curses behind the wheel, won the Ig peace prize.

Other prize categories included medicine (kidney stones can be passed more quickly on roller-coasters) and literature (most users of high-tech products don't read the instruction manuals). 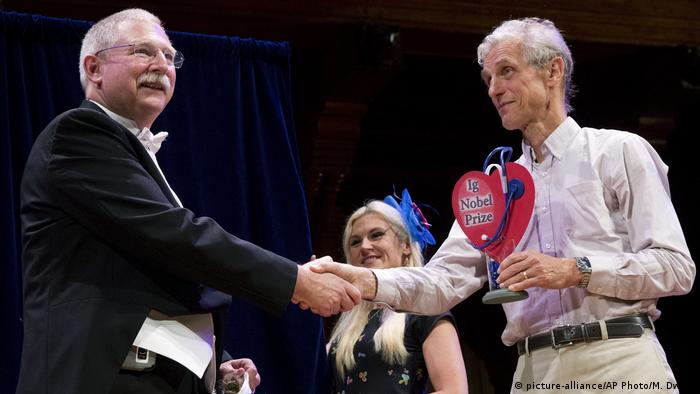 The theme of this year's ceremony, which took place in Harvard's Sanders Theater, was the heart. The event included the premiere of "The Broken Heart Opera" as well as the traditional paper airplane deluge.

AIR and Ig award founder Marc Abrahams emceed the evening while actual Nobel Prize laureates handed out the awards to the winners.

The winners' speeches were kept to a strict 60-second time limit, with 8-year-old Dorothea Hartig as "Miss Sweetie-Poo" interrupting them with her annually-repeated complaint, "Please stop. I'm bored."

A treatise on "pseudo-profound bullshit," biologists taking their work too seriously and the scandal-laden German carmaker VW have won prizes at the annual Ig Nobel awards. The prizes were announced late Thursday. (23.09.2016)

New study suggests Facebook break is good for your health

A scientific study by the University of Copenhagen has found that using Facebook less leads to a decrease in worry and sadness. The researchers encouraged active over passive use of social media to boost mental health. (22.12.2016)