The plane was evacuated when one of its wheels caught fire after landing from Istanbul. It is the second incident involving the Turkish budget airline this month. 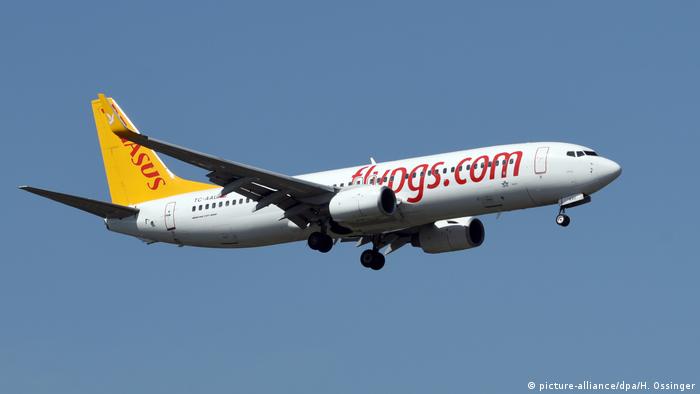 A Pegasus Airlines jet was evacuated after landing at Germany's Düsseldorf Airport on Saturday when airport ground crew noticed one of its wheels was on fire, according to airport authorities.

The plane had been carrying 163 passengers from Istanbul in Turkey to the western German city.

Passengers were ordered by the pilot to evacuate using the emergency slides. There were no injuries reported.

According to the website, FlightAware, the aircraft was an Airbus A320.

The fire reportedly extinguished itself before fire crews reached the plane. There was no immediate cause given for what caused the wheel to catch fire

The incident is the second involving Turkey-based Pegasus Airlines this month.

On February 5, a Pegasus Boeing 737 skidded off a runway at Istanbul's Sabiha Gokcen airport killing three people. An investigation into the Istanbul crash is ongoing.

Some 134,000 people were fired after Turkey's failed coup in 2016. Most are still jobless, forced to fight for healthcare and retirement benefits, and many suffer from post traumatic stress disorder (PTSD). (14.02.2020)

In the nick of time for a national holiday, President Erdogan is cutting the ribbon on Istanbul's massive new airport. It could one day be the world's biggest, but there have been many losers in the construction process. (29.10.2018)

Grup Yorum is a popular folk group in Turkey, known for their political writing. Several members are in jail on terror-related charges and two are on a "death fast" ahead of the opening of their trial on Friday. (14.02.2020)