Passion for tattoos leads to lashings in Iran | Middle East| News and analysis of events in the Arab world | DW | 22.01.2014

Passion for tattoos leads to lashings in Iran

One hundred lashes and six months in jail - when it comes to tattooing, Iran's regime takes a harsh line. Tattoo artist Mohsen Karimi experienced just that and is determined to continue his work anyway. 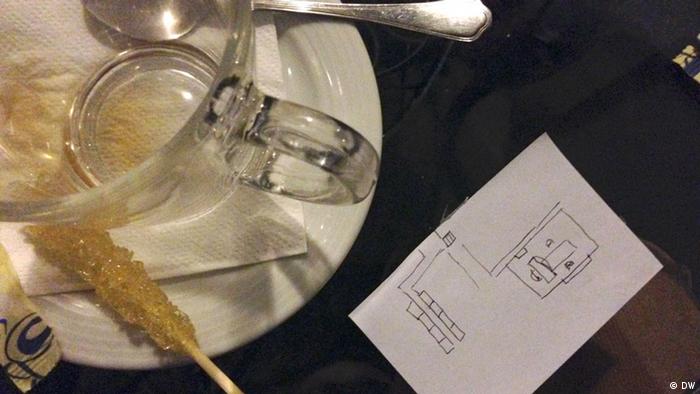 Mohsen Karimi drew this sketch of the jail cell where he was held for six months for tattooing people.

The day he was arrested Mohsen Karimi wanted to kill himself. Although it is now a year and a half ago that day still haunts him. Mohsen Karimi is not his real name. He was released from jail only a short time ago. Using his real name might endanger him again.

We are in the courtyard of a fancy art gallery in northern Tehran, where the chic boutiques and cafés line the busy boulevards. High walls shield the tables from the noise of the traffic, which never stops in Tehran. Although it is fairly cold, Karimi and his friends are sitting outside. Cups with steaming tea, packages of cigarettes and mobile phones are scattered on the table.

Karimi is around 30. With his stubbly hair and moustache, he would blend into any of Berlin's hip neighborhoods. Until last year he had his own studio at his home. His skills with the tattoo gun were well-known in Tehran, and his customers included famous athletes from the national soccer team. So he thought he was safe. And then one day 25 revolutionary guards with a warrant forced their way into his studio. 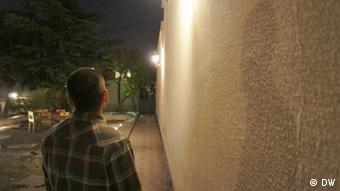 Due to his recent release from jail, Mohsen Karimi does not want his true identity revealed

After searching the house for his tattoo apparatus, Karimi was forced to give the men the password to his Facebook account. Then they blindfolded him and arrested him. "I knew that my work was risky," Karimi says. "But I never expected the regime would treat me like a cocaine dealer. I was really scared."

When he was allowed to take of the blindfold he found himself in a cell, roughly one by two meters, he says. Karimi immediately knew that he was in Evin, the notorious prison where the regime detains and tortures student activists and journalists. He would spend another six months in Evin's cells.

During the first two weeks, Karimi was interrogated several times. Sometimes he had to wait for hours, blindfolded and cuffed to a table in a painful position, he says. They asked him who his customers were and why and how he worked. Tattooing is not generally considered something forbidden in Iran. Like smoking, it is makrouh, which means it is allowed, but it should be avoided.

A confession and a lashing

That's why he still finds the charges against him surprising, he says: "They charged me for being a tattoo artist, for tattooing famous people and for posting pictures of my work on Facebook." Only after he signed a written confession was he allowed to contact a lawyer. Finally, after six weeks in jail, he was dismissed to wait for the trial, which took place a few months later.

The verdict: four more months in jail and 100 lashes of the whip.

They were executed on the very last day of his detention.

Karimi hoped he might be allowed to wear clothes that would at least protect him a little from the braided leather whip. But he had to strip down to his boxers and socks. Then a guard began to whip him, while two witnesses watched. "After ten lashes I started to tremble," Karimi says. "The guard asked me whether I needed a break, but I refused." After the final 10 extra hard lashes, he was allowed to dress and leave. 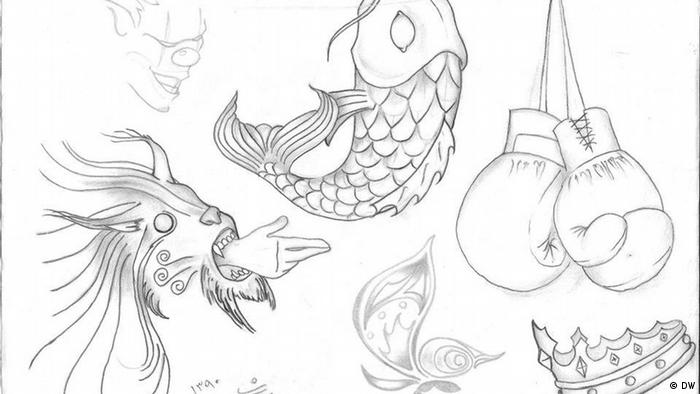 On this late November day, it's been two weeks since Karimi was let out of jail. When asked how he got through his imprisonment he smiles: "I love being a tattoo artist - that's how." Karimi's voice is calm when he tells his story. His friends chat and laugh nonchalantly. For them, stories of torture and imprisonment have become all too common.

Karimi plans to leave Iran, maybe for Germany or the UK. The most important thing for him is that he can continue working as a tattoo artist. But even if he stays in Iran, Karimi will continue his work, he says. As proof, one of his friends shows his left hand. On the knuckle it bears the tattoo a little square. Karimi smiles, then shrugs: it's a lucky charm.

Iranian President Rouhani has criticized restrictions on political parties and opposition activists and is pushing for a politically more open Iran. But domestic opposition among conservatives is strong. (09.01.2014)

Iranian exiles in the US welcome the nuclear deal

The West and Iran have agreed a deal under which Iran will freeze its nuclear program and sanctions against Iran will be eased. What do members of the exiled Iranian community in the US think of that? (25.11.2013)

Getting under the skin of tattoo cultures

Cultural tradition, fashion trend, therapy or drunken mistake - tattoos symbolize a breadth of different meanings. In Germany, people of all ages, professions and backgrounds are taking the plunge and getting inked. (12.02.2013)

Listen to the tattoo artist's story