Passage through Egypt: From Aswan to Luxor by boat 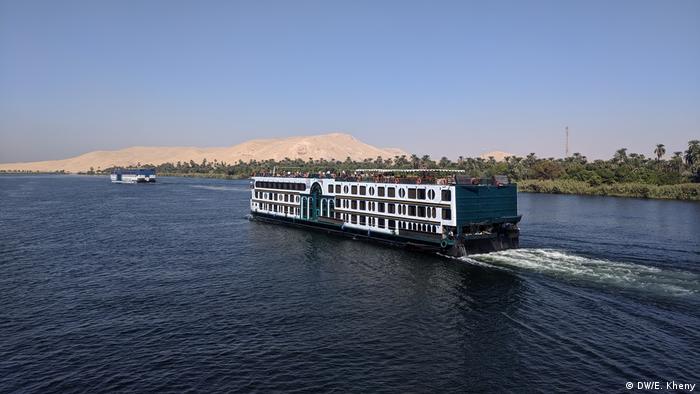 The Nile's endless blue waters stretched before me, merging with the sky on the horizon. For as far as the eye could see on both sides of the river there were lush banana and palm plantations, nestling rural life in their shade. Sipping on warm tea on the bridge at the ship's bow, which probably offered the best view I sighed into my cup: ''It truly is something, isn't it?'' Only half of my travel companions understood the rhetorical question asked in English, yet they all seemed to relate to the feeling behind it. The Nile isn't just a river, it is Egypt's lifeline: worshipped since the start of its civilization and beloved by all. 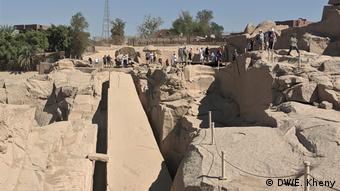 Obelisks were originally shaped by ancient Egyptians from a single stone

A little more than 32 hours earlier my flight from Cairo had landed in Aswan. Located in the south of Egypt, the city's quarries have been supplying granite to build Egypt's monuments since ancient times. In an era without modern machinery, granite was cut by making holes, inserting wooden wedges which were then soaked with water, enabling the wood to expand and split from the bedrock. This sounded so incredible that I had to see proof for myself at the open-air museum of Queen Hatsheput's Unfinished Obelisk. Standing at one end of the four-sided 1200 ton, 42-meter (137 feet) long granite, I couldn't see the other! The obelisk is believed to have been abandoned after massive cracks appeared probably caused by its sheer size and weight, meaning it failed to fulfill its purpose 3,500 years ago. What was once discarded however today continues to give an insight into the world of the stone-working techniques of ancient Egyptians. 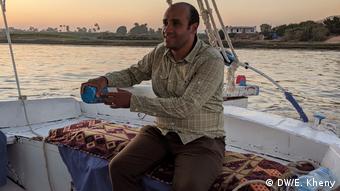 Mohammed Qenawy is an English-speaking tour guide in Egypt

Ambitious projects are not only a feature of ancient Egypt, they continue to this day. In 1970, construction concluded on the 4,000 meter-long (13,000 ft.) Aswan High Dam across the Nile, which in turn controls annual floods by collecting the water in a reservoir named Lake Nasser. From my vantage point on top of the mega-dam, it looked like an ocean shared with Sudan. I was impressed by its expanse — maximum length of 550 kilometers (342 miles) and width of 35 kilometers (22 mi.) — and terrified when I learned that it is also home to thousands of Nile crocodiles. My frightened pale face amused my guide Mohammed Qenawy  who would show me around for the next few days. He proudly told me: ''Old Egyptians built the Pyramids of Giza and new Egyptians built the Aswan High Dam.''

Visiting the Temple of Philae 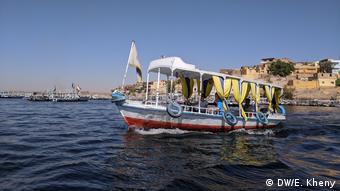 A short while later I found myself on a small boat slowly gliding through the Nile towards Agilika Island. A vast complex of rocks rose from the waters on either side, growing bigger as we approached. I watched speechless and wide-eyed as our little boat circled the Temple of Philae, its engraved pylons coming into view. A scene straight out of my favorite childhood movies: The Mummy and The Mummy Returns. Threatened by perennial flooding since the early 1900s, the ruins were saved from a watery grave by a UNESCO rescue project during the building of the Aswan High Dam which involved transferring the temples block by block from their original place on Philae Island to Agilkia Island. The process began with the construction of a cofferdam to pump out all the water from the temple's premises. Then, starting in 1976, the five monuments were dismantled and approximately 50,000 pieces were moved to the temple's new location. 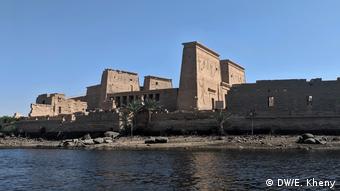 Over the next two hours, legends came to life as I explored the premises, trying to interpret  its carved scenes. The temple was dedicated to Isis (goddess of life), her husband Osiris (god of eternity) and their son Horus (god of protection). Although the construction of the temple started in 690 BC, many rulers of Egypt including Greek, Roman, and Byzantine made additions over the years, weaving a rather complicated history. Standing before the two towers of the temple's 18-meter (59 feet) high entryway, I admired  a giant relief depicting  a Ptolemy King — acting as Pharaoh — grasping a band of his enemies by the hair and raising his club to smite them in the presence of Egyptian gods and goddesses. The Ptolemaic kingdom was founded by Alexander the Great in 332 BC. Throughout their rule, the kings adopted ancient Egyptian customs and beliefs and gained acceptance from the country's masses despite their lack of Egyptian lineage. Inside Philae I would go on to find many similar inscriptions reinforcing the legitimacy of Ptolemaic (Greek) kings, as well as the birth house of Horus, an inner temple of Isis and carved Coptic crosses indicating a time when the temple was used by Christians.

My half-day excursion in Aswan ended at the local spice market. Laden with a bag filled with multi-colored peppercorns, fresh saffron, and a fragrant papyrus body scrub, I boarded my cruise at the city's port. At first sight confusing but yet with a system the ships were moored next to one another. This meant I had to walk on and off boats, jumping over rails and through security detectors until I reached the right vessel. Its door opened to an air-conditioned wood-beamed, chandeliered, tiled reception that gave way to narrow carpeted corridors lined with cabins on either side. Entering my own, I opened the curtains to a panoramic view of the Nile. In the afternoon sun, its waters shimmered, rippling with passing feluccas — traditional wooden sailings boats. 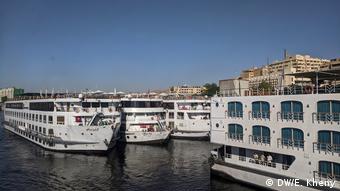 Cruise ships are popular with tourists on the Nile River

Just then the engine started up loudly, and ship blew its horn as it slowly steered away from land. I had made it on-board just in time.  With more than 200 licensed ships, Nile cruises range from basic budget to extravagant luxurious experiences. From the many cruise operators available, I intentionally chose a standard deluxe cruise ship which provided comfortable amenities like spacious lodgings and continental buffet meals without burning a hole in my pocket.

On my first evening, following a much needed nap, I joined other passengers on the deck for coffee and cake. A group of Chinese tourists played cards; an American family who had been swimming packed their things while another US tourist was reading guidebooks. Passing the huddles of small and big groups, I noted that English, German and Chinese were the most common languages along with a few instances of French and Spanish. The warm day breeze had now turned chilly as the sun dipped low to the west, bathing the sky in an orange hue and silhouetting the rest of the scenery. In a span of minutes, I watched dusk fall over the Nile like a foggy haze, enveloping the ship along with its busy rooftop bar, pool and me. With a bump, the ship docked, allowing hordes of eager tourists to disembark at our first stop: Kom Ombo Temple. 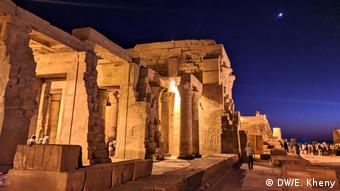 Kom Ombo Temple in Egypt was built under Ptolemaic rule

Constructed during the Greco-Roman period, this temple stands on a promontory at a bend in the Nile river, where in ancient times sacred crocodiles used to bask in the sun on the riverbanks and the fertile surrounding area was used for agriculture. Before the start of my temple tour, I found myself in a long queue for the mandatory security check. In Egypt, visitors at all tourist attractions are subject to metal detector scans and bag searches. With a very high number of tourists from multiple cruise ships visiting the temple at the same time, 15-20 minutes passed before my turn arrived. Starting from its twin symmetrical entrances to the two sanctuaries deep within, the temple is divided in its dual dedication to the crocodile god Sobek and the falcon god Horus. Here too, I found scenes of Ptolemaic kings presenting offerings and receiving the dual crown of Upper and Lower Egypt. My fascination peaked seeing an antique Nilometer which was used to measure water level during the flood season, as well as a scene depicting age-old medical instruments and columns retaining original red and blue paint. Although overrun by tourists the temple's colossal image prevailed, glowing brightly in the twilight hour. Making my way back to the ship, driven by curiosity I stopped by the crocodile museum but left a few minutes later, feeling creeped out by its inhabitant crocodile mummies.

The next morning, I was awoken at 5 am by a loud alarm, because Nile cruises tend to have a rigid schedule of sailing and sightseeing. Although drowsy, the therapeutic sight of the Nile got me out of bed. Joining the rest of the ship's passengers at the exit, I found a horse carriage waiting for me, ready to take me to the exceptionally well-preserved Temple of Horus in Edfu. 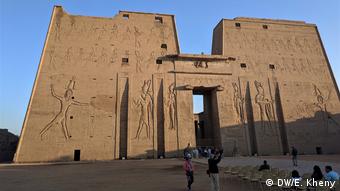 Apart from the early to rise bakers and tourists, the city was still very much asleep. Walking from the drop-off point, I saw Edfu Temple — lit up by the morning light — in the distance. Past two granite falcon statues and through the Ptolemaic pylon I went, crossing an open corridor lined with 32 floral columns, followed by two more columned halls and a maze-like inner sanctuary. Every inch around me was etched with life scenes of birth, festivities, and victory. Like a reel on a loop, it went on and on. Although by this point, I had a basic grasp of Egyptian history, I couldn't help but feel overwhelmed and just a little confused. I returned to the ship thinking of how human effort had uncovered and preserved history within Egypt's ruins which would have otherwise been lost to time.

For the rest of the day, I simply enjoyed sailing along the Nile. With no Wi-Fi net on my phone I explored the ship; stopping to chat with the 74-year old captain. Sayed's sharp eyes revealed nothing other than warmth. Despite being shy, he agreed to talk to me. With my guide Mohammed acting as a translator, Sayed explained how he had started his career working on the family's felucca as a young boy and later joined this ship where he has worked for the last 60 years. ''Why don't you retire?'', I asked. Smiling, he said: "Tourism is picking up and there are not enough captains. I've also always loved the river; it is where I belong." Tourism in Egypt, which declined sharply over concerns of tourist safety and government stability following two revolutions in 2011 and 2013, had only recently picked up again with international tourists returning to what was increasingly regarded once more as a safe destination.

Accepting Sayed's invitation for tea I remained a while, watching him and the Nile. It was easy to get lost in the river's serene beauty. The cruise had given me a chance to explore ancient temples but more importantly, it had allowed me to take a break from our modern ever-changing world and slow down.

Three people, at least two of them women, were buried in the city of Luxor some 3,500 years ago. A team of French archeologists has discovered their coffins in the necropolis of al-Asasif, complete with original paint. (27.11.2019)

Travel guide Lonely Planet has ranked Cairo among the top city destinations for 2020. DW reporter Eesha Kheny made her way to Egypt to find out what makes the city so special. (26.11.2019)

Cats were considered sacred by the ancient Egyptians so it was unsurprising that the discovery of mummies included so many felines. Lion cubs, however, are a much rarer find. (23.11.2019)