President Obama's new term starts with a daunting challenge: Unable to reach a compromise on its budget deficit, Congress faces a "fiscal cliff" of austerity, which could push the US into a severe recession. 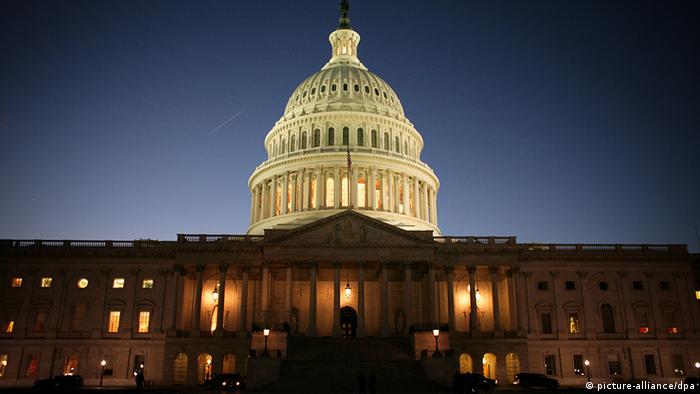 Just as European nations have begun to implement a series of crisis-fighting mechanisms to save their common currency, the United States now faces a so-called fiscal cliff at the end of the year, a series of austerity measures that could throw the world's largest economy into a double-dip recession.

In October, the International Monetary Fund (IMF) warned during its meeting in Tokyo that the slow pace of reform in Europe and the United States was causing global economic uncertainty. And increasingly, emerging economies such as China are no longer able to pick up the slack, as they also witness slower growth.

"Whether you turn to Europe, to the United States of America, to other places as well, there is a level of uncertainty which is hampering decision makers from investing and from creating jobs," IMF chief Christine Lagarde said in Tokyo. "We need action to lift the veil of uncertainty." 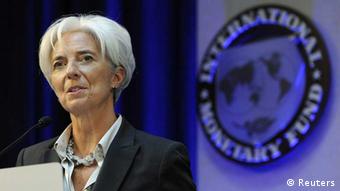 In Europe, the European Central Bank (ECB) has agreed to an unlimited bond-purchase program aimed at pushing down interest rates in crisis-stricken states, while the 17-member eurozone has set up its permanent bailout fund. But across the Atlantic in Washington, a deeply divided Congress is still struggling to resolve America's ballooning budget deficit.

Currently, the world's largest economy faces a series of massive taxes increases and cuts in spending to the tune of $607 billion (470 billion euros), or four percent of the country's gross domestic product (GDP). Both Lagarde and the Congressional Budget Office (CBO) have predicted that in lieu of some sort of political compromise that cushions the worst of the austerity, America will dip back into recession.

'Kicking the can down to road'

Taking action is easier said than done, particularly in a polarized political landscape that abhors principled compromise and revels in brinkmanship. According to Ron Haskins of the Brookings Institution, it's been expedient for elected officials to simply "kick the can down the road," a phrase that politicians in Washington use to deride a behavior which they continue to practice.

"Never decide today what you can decide tomorrow," Haskins, an expert on budgetary issues, told DW. "That's especially true when you have to make a tough decision that might make some voters mad. And that really is the bottom line here - voters are going to be mad."

The looming "fiscal cliff" is strictly a political construction, a consequence of procrastination. Last summer, as the United States sought to increase its debt ceiling in order to continue paying its bills, the Republican-controlled House of Representatives demanded a political commitment to reign in the budget deficit and national debt in exchange for their support.

The result was the Budget Control Act, which called for annual cuts of $109 billion - half in defense and half in domestic discretionary spending - over a period of 10 years if a bi-partisan committee failed to come up with a better plan. Unable to strike a politically acceptable balance between spending cuts and revenue increases, Congress is now scrambling to avoid the axe it created. And a series of tax cuts - the largest being those from the Bush era - are also set to expire at the end of the year.

"The voters say they understand that everybody has to sacrifice. They know the deficit is a huge problem," Haskins said. "But when you ask voters could we cut Social Security, could we cut Medicare, should we increase taxes - you know they don't like any of that."

Unable to come up with a long-term solution to America's fiscal problem out of fear of voter wrath, Congress has turned its own political gridlock into a looming economic crisis. In response, businesses are acting cautiously, uncertain of what the economy will bring in the near future. 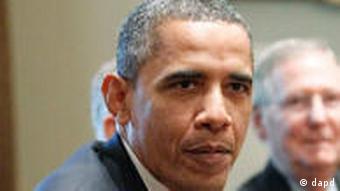 In summer 2011, Republicans and Democrats were unable to strike a deal on the debt and deficit

"The fiscal cliff has posed a climate of uncertainty that has made the economy weaker in the last half of this year than it otherwise would have been," William Cline, an economist with the Peterson Institute for International economics, told DW. Cline said that businesses have been slower to invest and hire workers, because it's currently unclear what the tax rates will be come 2013, and whether or not congressional indecision will push the economy into recession.

The Congressional Budget Office has predicted that should the US step over the fiscal cliff, growth in 2013 will grind to a near halt at 0.5 percent of GDP. Given the current political gridlock, some economists view the fiscal cliff as a bitter but necessary pill that could tame America's long-term fiscal problems in exchange for a short-term recession.

"There is a front-end-loaded brief recession, but by the end of the 10-year horizon you're back to pretty much where the GDP would have been and you have considerably less debt than under business as usual," Cline said. "Economists looking closely at this are tempted by the notion, well maybe we should just go cold turkey - take the fiscal cliff."

But for Stormy-Annika Mildner, an expert on American and European economic relations, the idea of letting the US go over the fiscal cliff sounds ominously reminiscent of the 2008 financial crisis. At that time, the government chose to let the investment bank Lehman Brothers go bankrupt, throwing an already shaken economy into a near meltdown.

"I would always say that a soft landing for the economy is better than a hard landing," Mildner, who works with the German Institute for International and Security Affairs, told DW. "The argument…reminds me a little bit of fall 2008 when Lehman went down. Where you could also have said the crisis is coming, nonetheless let's get it over with, let's have a hard landing."

According to Mildner, the fiscal cliff could have unforeseeable consequences for both a eurozone shaken by its sovereign debt crisis and emerging economies that are beginning to feel the impact of economic malaise in the West. The fiscal cliff's combination of blanket tax hikes and spending cuts would likely depress consumption in the US, leading to a drop in demand for goods from its major trading partners like the EU and China. The global economy, in turn, could suffer from "high instability, high insecurity, (and) growth rates would go down."

"I'm not so sure that the emerging economies would be strong enough to fill the gap because many of them are also dependent - like China - on the US market," Mildner said.

Currently, the prospect that a long-term political deal will be struck before the end of the year does not look promising. Although both sides of the political aisle are concerned about the pending automatic defense cuts, some 276 Republican members of Congress have signed a pledge not to raise taxes. And Democrats are unlikely to compromise on spending cuts if revenue increases are not also on the table. 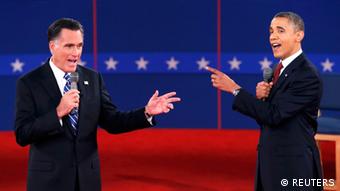 The fiscal cliff hardly featured during the presidential campaign

"The vast majority of Republicans have signed a pledge that they will not increase taxes, well in some sense that almost says you have to go over the fiscal cliff on January 1st to remove the binding nature of that pledge," Cline said.

Haskins believes that Congress will most likely create another stopgap measure at the last minute, which avoids the worst of the spending cuts and tax increases associated with the fiscal cliff, but does not address America's long-term problem of a $16 trillion national debt that only continues to grow. Sooner or later, as many countries in the eurozone know all too well, creditors begin to lose their confidence and come calling.

"The real threat here in the long run is that we're going to have some huge fiscal event imposed on us by people who carry our debt," Haskins said. "Or that there's going to be a downgrade of America's credit, and that would have an immediate impact on the federal budget, because our interest rates would go up."

Observers report glitches during US election

With the 2012 US presidential election over, criticism including vote-counting problems, shut-out observers and confusing voting processes have surfaced. The situation has apparently not improved since the last election. (09.11.2012)

The heads of five of the world's most influential finance and economic organizations met in Berlin for talks on the global economy. The meeting spurred German Chancellor Merkel toward an answer to the debt crisis. (31.10.2012)