French authorities have reportedly seized weapons and detained four relatives of an extremist who drove a car into a gendarmerie van in Paris. Authorities have struggled to explain why he had a gun permit.

French police detained the ex-wife, father, brother and sister-in-law of the man behind Monday's attack on a gendarmerie van on the Champs-Elysees in Paris.

The family members were taken into custody after being questioned by police at the family home, according to judicial sources.

Adam D. drove a white Renault Megane into a gendarmerie van on the busy Champs-Elysees just before 4 p.m. local time (1400 UTC) on Monday. The French Interior Ministry said it was a deliberate attack.

The 31-year-old Parisian, who was on a terror watch list as an Islamic extremist, died in the attack. The man had a gun permit, which was granted shortly before he was flagged with authorities.

Asked on BFM television why his permit wasn't rescinded, Prime Minister Edouard Philippe said "if you take away a permit from someone who is the subject of surveillance or being monitored, he will quickly understand why it has been taken away. ... It's a difficult decision."

Investigators reportedly found a stash of weapons at his home.

"This car contained a certain number of weapons, and explosives that could have been used to blow up the car," Interior Minister Gerard Collomb said, adding that the incident "shows once again that the threat level in France is extremely high."

Collomb said the Renault hit the leading vehicle in a convoy of police vans as they headed down the Champs-Elysees, near the Grand Palais exhibition hall.

AFP reported that a Kalashnikov rifle, handguns and gas bottles were found in the car, citing unnamed police sources.

Broadcaster BFMTV aired footage showing intense flames and orange smoke coming from the passenger compartment of the car and police apparently attempting to pull the driver out.

The attack happened close to the Elysee Palace, where President Emmanuel Macron was expecting to receive King Abdullah of Jordan a few hours later.

French police cordoned off the iconic Champs-Elysees avenue on Monday afternoon and warned people not to approach the area.

A bomb squad was later seen at the wreck. Twitter users initially reported being evacuated and seeing a car on fire.

France's anti-terrorism prosecutor immediately opened an investigation into the incident.

Police issued ongoing updates on Twitter warning people to avoid the area. Two subway stations in the area were closed.

The Champs-Elysees is one of the most famous streets in the world, and is emblematic of Paris.

The two-kilometer (1.2-mile) avenue was the site of a fatal police shooting by an extremist earlier this year. A note praising the Islamic State was found next to the body of the gunman and weapons were found in the attacker's car.

In June a hammer-wielding Algerian man was shot and wounded by police after he struck an officer on the head in front of the Notre Dame cathedral.He had pledged allegiance to the group in a video found at his home. 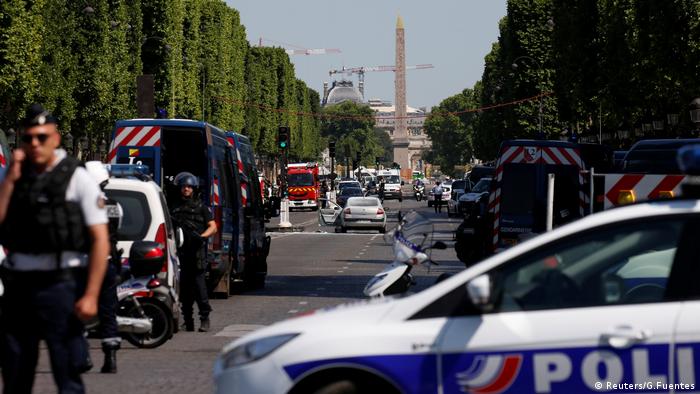 Extending the state of emergency

France is under a state of emergency following a string of terror attacks since 2015.

Collomb said he would present a bill at a cabinet meeting on Wednesday to extend the state of emergency from July 15, its current expiration date, until November 1.

He said the current situation in France showed a new security law was "needed" and the measure would "maintain a high security level" beyond the end of the state of emergency.

Editor's note: Deutsche Welle follows the German press code, which stresses the importance of protecting the privacy of suspects and victims and obliges us to refrain from revealing full names in such cases.