Sprinter Keula Pereira Semedo of Cape Verde and her running guide, Manuel Vaz de Veiga, missed qualification for the semifinal race. But they ended up winning at love. 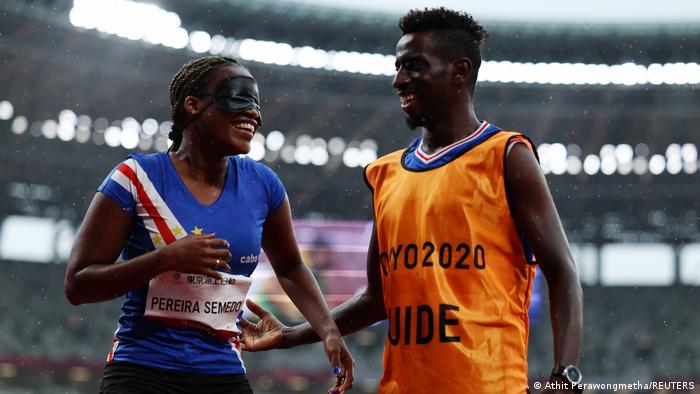 Vaz da Veiga proposed to Semedo after the 200m race

Cape Verde's Paralympic sprinter Keula Pereira Semedo on Thursday received a marriage proposal on the track of the Olympic Stadium in Tokyo.

At the finish line of the women's 200 meter in the T11 category for visually impaired athletes, Semedo's running guide, Manuel Vaz de Veiga, went down on one knee to ask for her hand in marriage.

The duo had just finished last in their preliminary heat, failing to qualify to the next round. But it didn't seem to ruin the mood.

In a video released by the Tokyo Paralympic Games organization, Semedo is seen smiling and holding her hands to her head upon receiving the proposal while the other runners and guides applaud.

Vaz de Veiga said he thought the stadium was "the best place" place to pop the question. "It's her second home," he said.  "We have been together for 11 years. So I thought it was time," he added.

"I don't have words for how I feel. But I'm sure our parents will go crazy with joy," said the bride-to-be.

"I was actually thinking about quitting sport. But now I have an extra motivation to continue. Always with him by my side."