Paralympics Digest: 'I definitely have my life back'

Syria's Anas Al Khalifa made his Paralympic dream come true simply by competing for the refugee team at the Tokyo 2020 Games. Meanwhile, an Afghan athlete made her debut in the newly Paralympic sport of taekwondo. 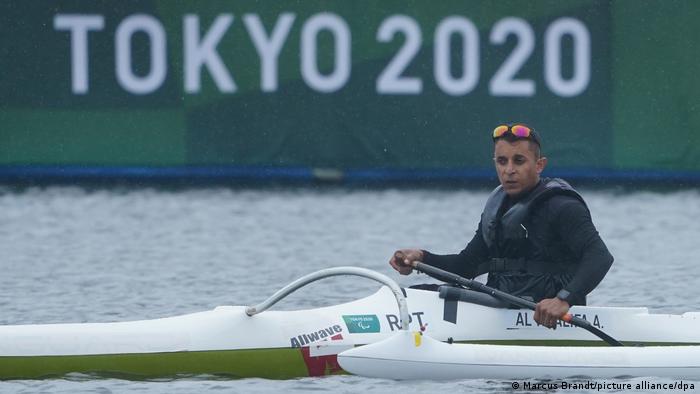 "I'm very proud of myself," Al Khalifa told the DPA news agency. "I definitely have my life back."

After giving numerous media interviews, Al Khalifa was desperate to get back to his room and his cell phone to try to reach his family in Syria to find out if they had managed to watch his races on TV.

"It's hard because we often don't have electricity or internet in Syria," said the refugee, who now lives in Halle an der Saale in eastern Germany. "The last time I had contact with them was a week ago."

The 28-year-old Al Khalifa ended up in Germany after fleeing Syria's civil war several years ago. He learned German and managed to find work, but in 2018 he fell off a roof while installing solar panels and was paralyzed. It was after that that he took up canoeing.

Al Khalifa said he was aiming to compete at Paris 2024, possibly again for the refugee team, although he hasn't ruled out competing for Germany, even though he doesn't plan to settle in the country long term.

"When the war is over, I want to go back (to Syria) because I was born and raised there. And because that's where my family is."

After failing to qualify for the final of the 800 meters, Alhassane Balde has retired from wheelchair racing.

"This was my last wheelchair race," said the 35-year-old Guinea native, who had also failed to make it to the final of the 5,000 and 1,500 meters – not the way he would have envisioned his departure from the Paralympic Games.

"I lacked the speed and the ease, perhaps it was also mental. It's hard to accept, but at the end of the day it's competitive sport. I can look back on a long career in which I had many highs. This is a low point." 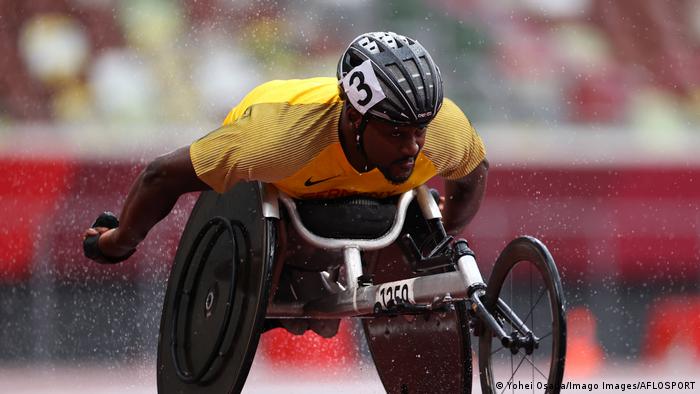 Balde, who moved to Germany to live with his uncle when he was five years old, first competed at the Paralympics in Athens 17 years ago, also took part in the 2008 Beijing and 2016 Rio Games. His biggest successes were two bronze medals at the the 2017 World Championships in London, as well as three silver and three bronze medals at European championships.

Tricyclist Jana Majunke braved the rain and fog at Fuji International Speedway to secure gold in the 26.4km road race, her second to go along with the gold medal she took in the time trial. Majunke finished the course in the T1-2 start class in 1:00:58 hours, 2:42 minutes ahead of the silver medalist, her German teammate Angelika Dreock-Käser, who had taken bronze in the time trial.

"This is very special. I can't really believe it, things couldn't have gone any better," Majunke told ARD public television. She added that she felt "lucky not to have been involved in any accidents" on the "slippery" track.

Thomas Brüchle and Thomas Schmidberger had to settle for silver after losing a tough battle against the Chinese in the final of the table tennis team competition.

Sarah Storey said she felt "overwhelmed" after becoming Britain's most successful Paralympian Thursday with her 17th gold medal, 29 years after her first.

Storey won cycling's C4-5 women's road race for her third gold at Tokyo 2020, following victory in the individual pursuit at the velodrome last week and triumph in the C4-5 road time trial two days ago.

"I'm a bit overwhelmed, again," she told Channel 4 TV immediately after the 79.2-kilometer race. "I feel like it is happening to someone else.

German-born Vanessa Low, who now competes for Australia, set a new world record of 5.28m as she won gold in the Women's long jump T63.

Afghan athlete Zakia Khudadadi, who escaped Kabul after the Taliban takeover, competed in taekwondo's Paralympic debut on Thursday. Khudadadi, one of two Afghanistan team members evacuated from the country, lost the match but re-emerged for the evening repechage round, where she gave six-time world champion Viktoriia Marchuk of Ukraine a serious fright before bowing out 48-34.

The Tokyo Paralympics have so far avoided any major coronavirus clusters, although 275 positive tests have been reported by organizers overall, mostly among Japan-based staff and contractors. On Thursday they confirmed 13 new cases, all but one of whom live in Japan, as the country battles a surge in infections driven by the more infectious Delta variant.