When they first arrived in Indonesia's Papua province, some young teachers from Jakarta had no idea a pandemic would thwart their teaching plans. Now they're using innovative methods to keep their schools going. 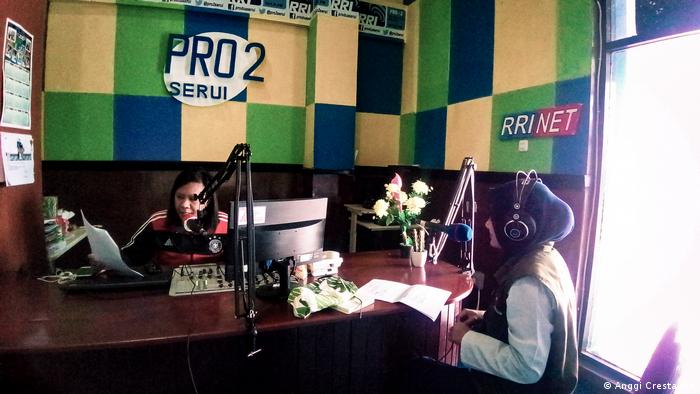 Anggi Crestamia, 29 (pictured above), left her job as a journalist in the Indonesian capital, Jakarta, as soon as she was accepted into a program to teach elementary school children on a faraway island in the Indonesian archipelago. It had been her long-cherished dream to reach out to children in inaccessible places, and this was her third application to the Indonesia Mengajar Foundation, which trains young people to educate and interact with locals in remote areas.

"I always wanted to do something useful for other people. The more people the better. When I got accepted, I thought, this is my time to do so," Anggi said in an interview with DW. She and some other colleagues were assigned to teach on some of the islands located north of Cendrawasih Bay in Papua province.

Read more: Why does Indonesia have a high COVID-19 mortality rate?

The elementary school where Anggi was asked to teach is fairly remote. It took her eight hours and two layovers to fly from Jakarta to Biak Island in Papua. From Biak, it took around the same amount of time to reach Yapen Island by boat. From Yapen, another 30-minute boat ride got her to Ambai Island, where the school is located. A flight would have been faster, but far too expensive. When Anggi arrived, she was welcomed by the local priest — her local guardian for the duration of her stay in Ambai.

A month of celebrations

Ambai is a tropical island with white, sandy beaches. Most people live on the water in stilted houses, and only a few buildings like churches, schools and other public facilities are built on land. Anggi was lucky because her place of work was close by. "When I opened my door, I could see the school," she said, laughing.

December is a month of celebration in Ambai. Several days before Christmas, locals decorate their boats and ride from one house to another, inviting everyone to join in the festivities. There is little school activity, and in the first weeks she arrived, Anggi used the time to socialize with the locals and explore the place she would call home for the next 14 months.

In January, she walked across the village to inform people that school had begun and that all children were expected to come back. There were four teachers including Anggi, who taught around 50 students.

In early 2020, news about the spread of a novel coronavirus in China began making its rounds in the media. At that time, Indonesia had yet to officially report any infection — the first case was reported in early March 2020. Anggi and colleagues assumed that even if the virus arrived in Indonesia, they would be fine because they were far away from urban centers. However, once the pandemic hit, Papua was affected, too, and the authorities imposed a lockdown.

'We heard you on the radio'

Other than teaching, Anggi's responsibilities also included meeting with different people living in neighboring villages and islands. "Each month, I stayed in the village in Ambai island for 2-3 weeks and spent the rest of the time in the district capital in Serui," she explained. When the lockdown was imposed at the end of March, she and her colleagues were stuck for months in Serui without any possibility to return to their respective villages.

To keep educational institutions functioning during the pandemic, the central government in Jakarta decided to promote distance learning using mobile internet connections. However, success was limited because about 54% of the thousands of students had no access to the internet. "Many still use what we called a 'wooden cell phone' as their mobile device," she said, referring to outdated series of cell phones that cannot access modern apps.

Almost a month went by without any educational activity. Around the end of April, a representative from RRI, the national radio broadcaster, approached them and discussed the possibility of holding classes on the radio. The young teachers thought it was a brilliant idea. 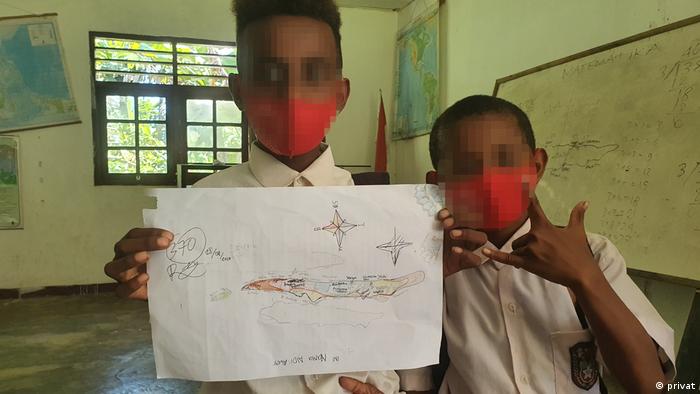 School goes on despite the lockdown

"Since I also taught arithmetic, I used ways to trigger the imagination of young children. Once, I taught them how to read the concept of time; hopefully, they understood it," Anggi said. Initially, she was not sure that the broadcast would reach her students on Ambai island, but her fears were baseless.

"When I came back to my village and met my students, they said, 'Hey teacher, we heard you on the radio! We kept learning through your lessons on air!' It was a heart-warming, joyful moment," Anggi said, happily.

During the lockdown, 25-year-old Radhiyan Pribadi, another teacher in Papua, knocked at almost every door in Sambrawai village to check on his pupils. He managed to visit up to 10 houses per day and was surprised that the parents were more enthusiastic about their children's education. 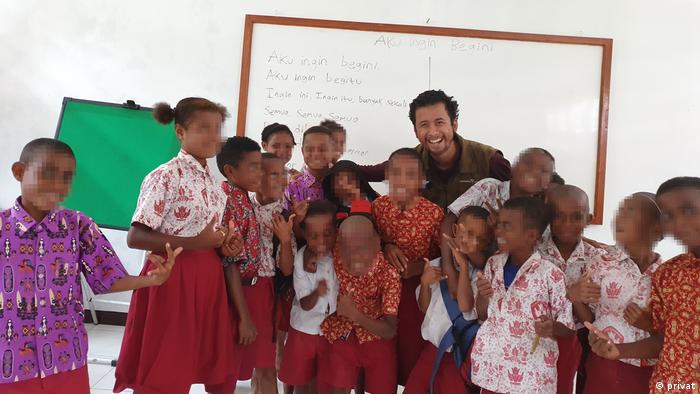 "When I came to collect their homework, the parents were curious and wanted to know if the answers were correct to the assignments I had given the day before," he said, laughing. Radhiyan expanded his activities and started teaching students individually, carrying a whiteboard and markers everywhere he went. However, he couldn't reach students living in nearby villages.

"I needed to cross two rivers, which could not be crossed after heavy rains," he said. But at some point, he decided that he could not let those children go without basic education for any longer and bought a motorbike. "By bike, it takes only about 20 minutes one way," he said. He is grateful that the situation is slowly returning to normal.

Perks of the countryside

Papua's generous people never cease to amaze Anggi and Radhiyan.  For example, the captain of a boat they were taking to Serui offered to move them from normal economy-class seats to VIP seats after he found out they were volunteers.

Radhiyan was also impressed by his students' enthusiasm to learn. "Children in Papua are different. They are not shy and are willing to engage in schoolwork. If I give them homework, they ask for more."

He wishes the government would do more to help educate these children and reduce the developmental gap between different parts of the country.